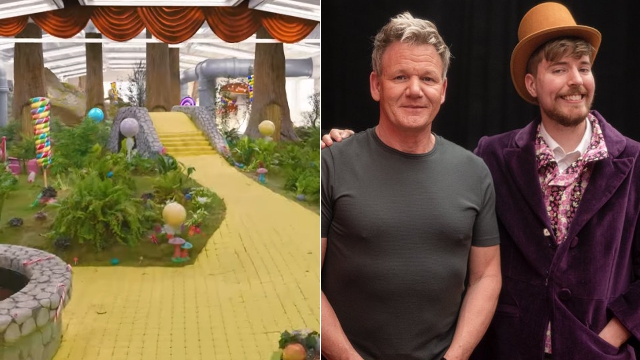 WATCH: This Person Literally Rebuilt Willy Wonka’s Chocolate Factory Then Gave it Away

Spot Gordon Ramsay, the world's largest Coke bottle, and $500 million in this video.

(SPOT.ph) In 1964, when author Roald Dahl released possibly his most famous work Charlie and the Chocolate Factory, which featured five kids who were invited to the chocolate factory of eccentric businessman Willy Wonka and competed in some (admittedly disturbing) challenges in order to claim the factory, Dahl could not have possibly foreseen that a few dudes on the internet decades later would recreate his world of pure imagination just for a fun 17-minute YouTube video.

But such is the world we live in. Popular internet personality and philanthropist MrBeast and his team have brought to life Willy Wonka's Chocolate Factory for a contest, with Gordon Ramsay as a guest judge and ownership of the factory itself as the grand prize.

Also read: How to Fight Using Butt Plugs? Learn From the Martial Artists Behind Both Everything Everywhere All at Once and Shang-Chi

Hot off the success of recreating Hwang Dong-hyuk’s Squid Game in real life for a first-place reward of $456,000 and kickstarting the #TeamSeas initiative to remove 30 million pounds of trash from the ocean, MrBeast (a.k.a. Jimmy Donaldson) has returned to recreate the chocolate factory from the 1971 film Willy Wonka & the Chocolate Factory.

Donaldson and the rest of the MrBeast team have set up a few candy-themed challenges for 10 contestants, one of whom would win the first-place prize of the Chocolate Factory itself. The challenges include playing a simple game of Hide and Seek within the Chocolate Factory set (which was recreated almost entirely from the 1971 film), determining which toilet is made out of cake, trying to shoot the world’s largest Mentos into the world’s largest Coke bottle, and a bake-off judged by none other than world-class chef and culinary entertainer Gordon Ramsay.

Prizes given away in the video were a television set priced at roughly U.S. $3,300 and a brief case containing U.S. $10,000, on top of the factory itself, which is mentioned to have costed about U.S. $500 million. The MrBeast team states that they normally pick out contestants from the main channel’s pool of subscribers. However, for this challenge, the participants were chosen by whoever found a golden ticket inside their purchase of a MrBeast Feastables Chocolate Bar, just as in the novel and films.

MrBeast’s main channel is one of the fastest growing Youtube channels of recent years, with a subscriber count of close to a 100 million users. His channel grew to big success because of his unique brand of expensive stunts and large, cash prize giveaways.

Also read: I Can't Unsee the R-Rated Version of Spider-Man

For more information, check out the MrBeast Youtube channel.