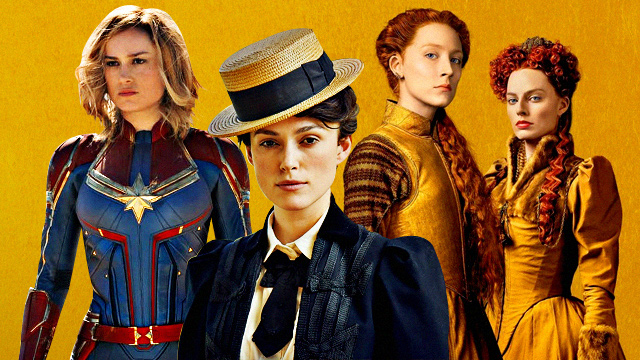 These strong women reshape the cinematic landscape for the year ahead.

(SPOT.ph) It’s been a long time coming, but women are finally, officially front and center in movies! Based on a study conducted by research agency Shift7 and American talent and sports agency Creative Artists Agency, moviegoers are in full support of women-fronted films. The Guardian reported that “revenue for 350 high-grossing films released between 2014 and 2017 was assessed, and the average results for female-led films did best, at every budget level.”

Given these findings, it’s no surprise that more and more production houses are banking on stories with strong female characters to generate billions of box office sales. Tomb Raider, Mamma Mia! Here We Go Again, and Ocean’s 8 are just three prime examples of successful, female-led franchises we’ve seen in 2018.

2019 is shaping up to be another amazing year for women on film. Be sure to nab tickets for these movies in the months to come!

Director: Josie Rourke
Release date: January 2019 (U.S.)
This historical drama is set in a time when beautiful, powerful females ruled the monarchy. At opposing sides are Scotland’s Mary Stuart (Saoirse Ronan) and England’s Elizabeth I (Margot Robbie)—royal cousins who fight for love, independence, and the crown.

Director: Wash Westmoreland
Release date: January 2019 (U.S.)
Keira Knightley plays the titular character Gabrielle Colette, a French countrywoman who is convinced by her husband to write a novel under his nom de plume. The smashing success of the book and Colette’s need for recognition put a strain on the couple’s relationship.

Director: Robert Rodriguez
Release date: February 14, 2019 (U.S.)
Manga fans rejoice! The cyberpunk graphic novel character created by Yukito Kishiro finally gets its live-action counterpart, thanks to producers James Cameron and Jon Landau. Alita: Battle Angel tells the story of a cyborg (Rosa Salazar) reborn in a post-apocalyptic world. Though she wakes up with no memory, Alita remembers one thing by heart: the martial art Panzer Kunst. Her lethal skills come in handy as she attempts to unlock her past life.

Directors: Anna Boden and Ryan Fleck
Release date: March 6, 2019
Carol Danvers (Brie Larson) is given technologically advanced powers by a race of noble warriors. Crossing paths with Nick Fury as she tries to seek answers about her identity, she must save the planet from an intergalactic war between Krees and Skrulls. The question on everyone’s minds is this: Will Captain Marvel’s backstory bring to light how she could save the superheroes Thanos eliminated with a snap of his fingers in Avengers: Infinity War?

Director: Richard Linklater
Release date: March 22, 2019 (U.S.)
Based on the book written by Maria Semple, Where’d You Go, Bernadette centers around an agoraphobic architect named Bernadette Fox (Cate Blanchett) and her mysterious disappearance.  Her inspiring yet complex past is revealed as her 15-year-old daughter tries to search for clues that would lead to where she is.

Director: Simon Kinberg
Release date: June 6, 2019 (U.S.)
A mysterious cosmic force turns powerful telepath Jean Grey (Sophie Turner) into an angry, unstable mutant. Her irrepressible dark side brings death and destruction to the planet, forcing her teammates to exhaust all possibilities to defeat and save her at the same time. (Will her rage bring death to the X-Men family? That raining funeral scene from the trailer is hard to miss.)

Director: Andrea Berloff
Release date: September 19, 2019
Say hello to the gangster wives of New York! Melissa McCarthy, Elisabeth Moss, and Tiffany Haddish show how badass women from the '70s can be when their characters—Hell’s Kitchen housewives—are forced to continue the organized crime operations of their jailed spouses.

Director: Elizabeth Banks
Release date: November 1, 2019 (U.S.)
Nineteen years after the first movie successfully combined action and comedy and redefined the phrase “girl power,” actresses Kristen Stewart, Naomi Scott, and Ella Balinska take on the next generation of Angels assigned to go on dangerous covert missions to save the world.

Director: J.J. Abrams
Release date: December 20, 2019 (U.S.)
Taking place one year after the events of Star Wars: The Last Jedi, the Resistance picks up the pieces after their gruesome confrontation against the First Order. Continuing the fight alongside Poe and Finn, Rey (Daisy Ridley) is now a true “force” to be reckoned with because of the Jedi training she completed under Luke Skywalker. Although actress Carrie Fisher passed away in 2016, the trilogy’s conclusion will feature scenes of the legendary General Leia, which were originally filmed for Star Wars: The Force Awakens.