10 Funny Movies from the '90s to Watch for the Rainy Season
Loading
Already a member? Log in
No account yet? Create Account
Spot.ph is your one-stop urban lifestyle guide to the best of Manila. 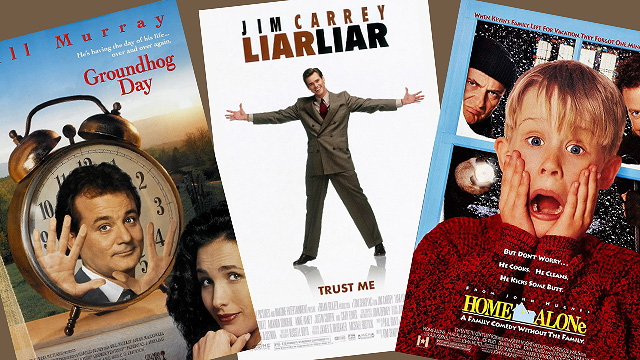 Laze around at home with these throwback movies that will make you LOL.

(SPOT.ph) The rainy season is here, and nothing sounds better than lazing around at home, watching old favorites, and laughing out loud. For a touch of throwback to make you feel even more warm and fuzzy, load up a good laugh in the form of a movie. Ready your popcorn while you're at it!

Here are 10 comedy films from the '90s that are perfect for days when you want to stay in this season:

While being accidentally left behind when your family goes on Christmas vacation is easily remedied with today’s technology, it was a pretty plausible dilemma in the '90s. In Home Alone, eight-year-old Kevin’s situation becomes fodder for comedy gold that brings on the laughs to this day. The mischievous kid (Macaulay Culkin) relishes having the house to himself at first, but it’s not long before he has to ward off burglars. He does it all with the playful creativity of a kid, from laying out booby traps by the entrances to tricking the burglars into thinking there are adults in the house. On the other side of the laughs is the loneliness that creeps up on Kevin, not knowing that his family is doing everything they can to get back to him. Home Alone continues with four more films, but really, there’s nothing like the first. Bonus: Check out Culkin’s parody of Kevin’s antics in an ad last year!

Comedy with a heart, Mrs. Doubtfire is one of the cinematic gems that the late Robin Williams left behind. He plays two characters in the movie: Daniel, a struggling actor who loses custody of his three kids in the divorce, and Mrs. Doubtfire, the nanny persona he takes on in a desperate attempt to spend time with his kids. It’s a rough start as Daniel pretends to be a home expert—his fake boobs catch fire on day one—but Mrs. Doubtfire eventually becomes the rock of the family. The push and pull between his two personas make for hilarious moments with an undercurrent of the family drama that comes with the divorce.

Another comedy about pretending to be someone else, Sister Act stars Whoopi Goldberg as a lounge singer who pretends to be a nun as part of her witness protection program. A convent is the last place that Deloris a.k.a. Sister Mary Clarence wants to be in, and laughs abound as the friction mounts between her and the Reverend Mother (Maggie Smith). When Deloris becomes choir director, she elevates the nuns’ performances, not to mention their role in the community. Follow it up with the sequel, Sister Act 2: Back in the Habit, for a feel-good afternoon full of music and laughs.

Of all the Jim Carrey comedy films in the '90s such as Dumb and Dumber, The Mask, Ace Ventura: Pet Detective, this one is particularly memorable as it combines the actor’s slapstick humor and penchant for heartwarming drama. He plays workaholic lawyer Fletcher Reede who can’t tell a lie for 24 hours, as a result of his disappointed son’s birthday wish. It’s a riot watching Carrey twist and contort his whole body in an effort to tell a lie. Balancing his comedic physicality is the film’s depiction of a father-son relationship that tugs at the heartstrings.

Adam Sandler, another comedy king of the ‘90s, plays 27-year-old Billy Madison who must repeat grades one to 12 to earn his inheritance. The supposed heir to a hotel empire, Billy lives a carefree, or more accurately, reckless life. When he ruins an important meeting, his dad Brian (Darren McGavin) names the company vice president as his successor, effectively stripping Billy of his inheritance. Revealing that Billy’s teachers were bribed to give him a passing grade, Brian agrees to reconsider Billy’s inheritance if he can legitimately finish primary school in two-week intervals. This movie is considered as Sandler’s breakthrough comedy, paving the way for Happy Gilmore, The Wedding Singer, The Waterboy, and more of his films.

This teen comedy is as much of a classic as good ol’ American apple pie. It follows a group of friends who make a pact to lose their virginity by the time they graduate from high school. Some of the jokes may be a bit outdated, but the movie still has its moments. Who could forget Jim’s (Jason Biggs) encounter with an apple pie, or his embarrassing moments with dad Noah (Eugene Levy)? American Pie was followed by American Pie 2 (2001), American Wedding (2003), American Reunion (2012), and a bunch of spin-offs starring some of the original cast members.

Bill Murray brings his signature comedy and depth in this movie about a weatherman stuck in a time loop on Groundhog Day. In a small town, Phil starts to live like there’s no tomorrow—because there doesn’t seem to be. He binges on food, alcohol, and dangerous stunts, knowing that he’ll wake up unharmed the next day. That is until the time loop loses its novelty and he develops feelings for news producer Rita (Andie MacDowell). Groundhog Day left such a mark on pop culture that its title is now synonymous with unpleasant recurring events.

The Big Lebowski didn’t exactly sell out theaters in 1998, but it has become a cult hit through the years. It starts off with a case of mistaken identity, which brings together slacker Jeffrey “The Dude” Lebowski (Jeff Bridges) and millionaire Jeffrey “The Big” Lebowski (David Huddleston). The Dude was assaulted by two men who intended to hit up The Big Lebowski for money supposedly owed by the millionaire’s wife. From there, the crime comedy winds through plot twists and turns, always with a super chill vibe. Directed by the Coen brothers, the off-kilter comedy stars some of today’s biggest names including Julianne Moore, John Goodman, Steve Buscemi, and the late Philip Seymour Hoffman.

Before the fight against fat shaming, there was this Eddie Murphy comedy about a kind-hearted obese professor who takes a special serum and becomes a fit egocentric. Every '90s kid remembers Murphy playing Professor Sherman Klump, his alter ego Buddy Love, and the entire Klump family. The professor’s uncontrollable transformations put him in sticky situations, especially when his crush Carla (Jada Pinkett-Smith) is around. Eventually, Klump’s misadventures lead him down a path of body love and self-acceptance. Fun fact: The Nutty Professor is a remake of the 1963 film with the same name, which was based on the classic story of Dr. Jekyll and Mr. Hyde.

Robin Williams stars as Armand Goldman, the openly gay owner of drag club The Birdcage alongside Nathan Lane who plays his flamboyant and effeminate partner Albert Goldman or "Starina," the club's main attraction. Their normal is disrupted when their son Val (Dan Futterman) returns home with the news that he wants to marry Louise (Dianne Wiest), the daughter of Senator Kevin Keeley, played by Gene Hackman, the founder of a conservative political party. The Goldmans concoct an elaborate plan to fool Louise's parents that Val comes from a normal family and the whole ruse involves disguises, lies, make-up, and a whole lot of laughs. At the heart of all the shenanigans is the family's firm stand to be accepted for who they are, coupled with the desire to have their son marry the girl he loves.