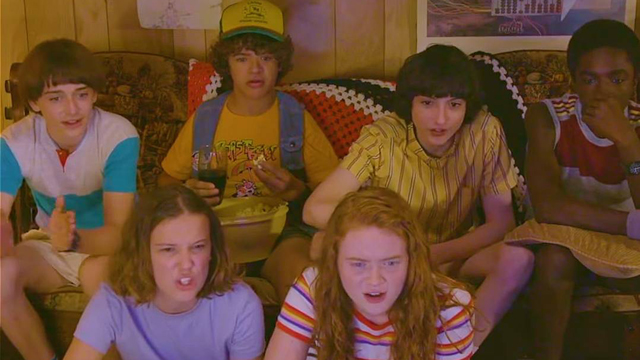 "Oh my god. What is happening?"

(SPOT.ph) The cast of Netflix's Stranger Things is back with Season 3 and the episodes gave us major nostalgia—from fashion, music, down to pop-culture references. Given how good they are at dealing with supernatural monsters from the '80s, it's interesting to find out how they would react to something with a similar theme—in this case, an episode of Regal Shocker, an '80s Pinoy horror trilogy.

The Stranger Things gang sits in front of the screen, complete with snacks and drinks, and watches the third episode of Regal Shocker, titled "Aparador," which focuses on bizarre and eerie occurences involving a haunted closet. They all watch intently as the events unfold, taking turns predicting what's going to happen next.

Gaten Matarazzo sums up the overall mood in the room and asks, “What is the plot?” Finn Wolfhard, meanwhile, offers the possibility that the monster just “wants to be loved.”

Minutes into the episode and the gang is divided, with the division led by Noah Schnapp exclaiming "Kill her!" while the other half is discouraging the character's demise. Caleb McLaughlin, on the other hand, tries his best to scare Millie Bobby Brown and Sadie Sink, but the girls just aren’t buying it.

The clip ends with Brown insisting that the title of the movie is "Regal Shooker," and adds, "I thought it was an 'O,'" referring to the movie's titlecard.