Short, Funny Shows to Watch on Netflix During Your Daily Commute
Loading
Already a member? Log in
No account yet? Create Account
Spot.ph is your one-stop urban lifestyle guide to the best of Manila. 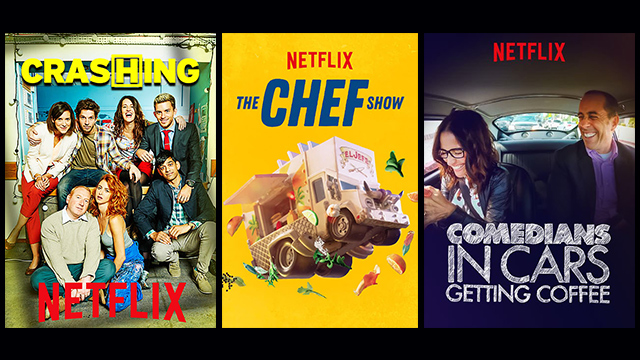 10 Offbeat Shows to Watch During Your Commute

Can't talk? Streaming will save the day.

(SPOT.ph) It seems talking on public transportation is going to be prohibited to make up for the easing of physical distancing rules that were announced on September 12. The use of cell phones is likely to be disallowed, too, and while the details of the new guidelines are still to be discussed at the Inter-Agency Task Force’s meeting today, if keeping people from talking is the idea, you should still be able to text or go online through your mobile. (If they want people to stay sane, that is.)

If you’ve been having to go to work and going on a bicycle isn’t an option, we’ve put together this list of things you can watch during your commute with episodes that are short enough to finish in one sitting. No talking needed!

More Netflix lists:
No Kids Allowed: 10 Mature Cartoons to Watch on Netflix
The Most-Watched Pinoy Romance Films on Netflix Right Now
10 Stand-Up Comedians on Netflix Who Are Keeping It Real
10 Anime Classics to Stream on Netflix If You're a Newbie

Put these unconventional Netflix shows on your playlist for your daily commute:

This underrated series stars Paul Rudd as a burned-out copywriter who undergoes a treatment at a shady-looking spa, only to find out he’s been cloned. It’s a funny take on the morality of cloning—and what to do when you discover you’ve got an exact copy of yourself out there in the world.

Phoebe Waller-Bridge made a splash in 2019 with the second season of her BBC series Fleabag, and fans would get a kick out of Crashing. The one-season show came out in 2016 and stars Waller-Bridge as Lulu, who visits her old friend Anthony in London—and ends up moving into the abandoned hospital he occupies with his fiancé and a hodgepodge of other characters. It turns out Lulu has some unresolved romantic tension with Anthony, and of course, chaos ensues.

We’ve all been through the awkward struggles of high school, and Never Have I Ever is a smart, relatable look at that experience—with a generous helping of Mindy Kaling’s signature humor. Devi is an Indian-American 15-year-old who’s survived a mortifying freshman year and is dead-set on turning things around in the new school year. Will it all be smooth sailing? Heck no.

If you’ve ever seen the ’80s classic Karate Kid, you’d know that Daniel LaRusso (Ralph Macchio) is the underdog who ends up rising above the school bully, but Cobra Kai turns that on its head. It’s more than 30 years later, and the aforementioned bully, Johnny Lawrence, has fallen on hard times and is working as a part-time handyman at an apartment complex. He ends up rescuing a teenager from a high-school gang of karate kids (forgive the pun), and starts a dojo called Cobra Kai. Naturally, he also crosses paths again with LaRusso, who now owns a chain of car dealerships.

Take an elite spy agency and a smooth-talking operative and ideally, you’d get the equivalent of James Bond, but Sterling Archer is the complete opposite. While he’s got 007’s way with women, his skills at being a secret agent fall dismally short, leading to hilarious results. Watch this if you’re in the mood for something decidedly not politically correct.

This 2006 British sitcom may be old, but it’s still relevant—especially if you’ve ever had to deal with anyone from tech support. Bridesmaids’ Chris O’Dowd plays Roy Trenneman, one of three people on the IT team at the fictional Reynholm Industries in London. It’s a funny but enlightening look at what it’s like to be a department that’s so essential and yet so unappreciated.

It’s not one of the newest food shows on Netflix, having come out in 2017, but it’s just as entertaining. Takeshi Kasumi is a recently retired salesman who’s decided to spend his days enjoying food—whether it’s from a hole-in-the-wall ramen diner he happens to stumble upon or a fondly remembered hashed beef-and-rice bowl from his younger days. Warning: You’ll want to eat after each episode.

From the creators of BoJack Horseman, the first season of Tuca and Bertie dropped on Netflix in May 2019. It features the voices of Tiffany Haddish and Ali Wong, who play “bird-women” in their 30s who live in the same apartment building. While Tuca (Haddish), as you might have guessed, is a toucan and Bertie (Wong) is a songbird, they each go through the everyday dramas a typical single woman living in the city might, giving the show a fresh, quirky perspective on your usual single-life sitcom.

You might remember Jon Favreau playing a chef in Chef—while The Chef Show is dubbed a spin-off, Favreau plays himself this time and while he’s not actually a chef, he works with Chef Rey Choi as he eats and cooks his way through things like steak and sourdough bread. The show’s been described as “a voyeuristic look at Favreau learning from the best and chatting with friends new and old.” The “friends” include Robert Downey Jr. and Gwyneth Paltrow, naturally.

Comedians in Cars Getting Coffee

Legendary comedian Jerry Seinfeld puts two of the things he loves the most together in one show—well, three if you include comedy. In each episode, he drives a vintage car and picks up a famous person so they can go somewhere to get an excellent cup off coffee. You’ll get to listen in on the most riveting conversations on the most random things, from raisins to a drink called “wheat puffs.” A quick list of our favorite guests: Tina Fey, Kate McKinnon, Matthew Broderick, Martin Short, and Barack Obama.

Streaming Services Netflix Sitcoms Comedy Guide Adventurer Savvy Summit News Summit News Feature
Your Guide to Thriving in This Strange New World
Staying
In? What to watch, what to eat, and where to shop from home
OR
Heading
Out? What you need to know to stay safe when heading out