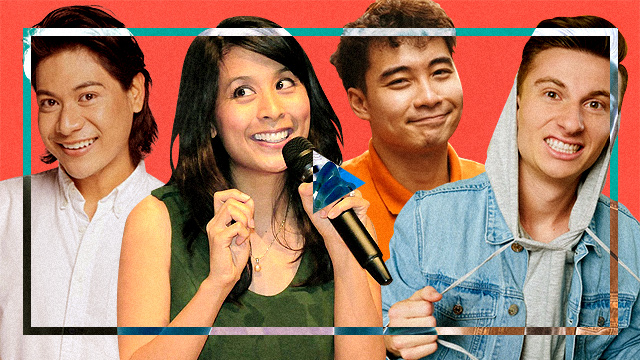 Keep yourself sane with their LOL-worthy videos.

(SPOT.ph)  Endless scrolling on your phone often brings you to two kinds of rabbit holes: cute dogs and news. They balance each other out because one makes you believe in the goodness of the world, and the other one, well, you get the drift. If you’re looking to throw more fun things into the mix, there are a number of comedians making waves on Facebook, Twitter, YouTube, TikTok, Instagram—you name it!

Also read:
10 Stand-Up Comedians on Netflix Who Are Keeping It Real

Here are some comedians you can follow online for your daily dose of LOLs:

London-based Malaysian comedian Nigel Ng has been creating funny content on YouTube since 2019, but it wasn't until the creation of the persona Uncle Roger that he broke the Internet. The first sketch, which was uploaded on July 8, roasted BBC food presenter Hersha Patel for measuring water when cooking rice (instead of using your finger), draining soggy rice in a colander, and using "new" rice to make egg fried rice. The stereotypical Asian uncle—who's obviously very passionate about rice and wears a cell phone case on his belt—has since made peace and teamed up with Patel for fun collaborations. He also has reaction videos on how Jamie Oliver and the Gordon Ramsay cook rice.

U.S.-based Christine Gambito was already doing sketches with multiple characters on YouTube in 2006, even before it became cool. Happy Slip, according to her, is inspired by how her mom (a Filipina) would always remind her to wear a half-slip under skirts. "Your hap e-slip! Be sure to wear your hap e-slip,"so she thought it was called a "happy slip." You'll find this kind of humor—common in Filipino family conversations—in most of her videos. She later got into stand-up comedy tours, but the ongoing quarantine has her back to uploading more clips online.

Stand-up comedian Trevor Wallace from Los Angeles loves making sketches on seemingly mundane things, like how plants are taking over our quarantine life and the music you hear whenever you're put on hold. He also makes sarcastic comments about annoying people like guys who fold their beanie, an obnoxious person who just got his/her first tattoo, guys named Kyle, and—yes—fuccbois.

Feeling disgruntled towards the government? Nineteen-year-old local content creator John Paul Joseph Santos (a.k.a. Pipay Kipay) can make a funny but truthful commentary on freedom of expression, misogyny, land grabbing, and other national issues all in one go. Watch for his subtle political shade about Manila Bay, Mocha Uson, ayuda, and more.

He's been around since 2006, but Ryan Higa's YouTube channel nigahiga is still going strong—it's now got up to 21.5 million subscribers. He started lip-syncing to songs and quickly expanded to rant videos, spoofs of commercials, and music-video parodies.

JR De Guzman, who was born in the Philippines and raised in the U.S., brings his acoustic guitar along whenever he does comedy. He is known to write funny songs about racism, babies, grandmothers, and being Asian. He has a full set on Netflix's The Comedy Lineup (season 2, episode 7), but you can also catch him on his YouTube channel.

Bec Hill combines comedy and charts in her performances, and we're here for the cool-looking visual aids we wish we had in grade school. So far she's made fun diagrams about Elon Musk, a funny (and inappropriate) translation of Edith Piaf's song "Non Je Ne Regrette Rien," and misheard lyrics.

Trey Kennedy describes his channel as a place "where [he's] basically just really extra." His weekly videos make fun of people's relationship with Netflix, the Karens of the world, and dealing with quarantine. His "Day 1 in quarantine vs Day 50" is something we can all relate to, especially since we're now at day we-don't-know-anymore.

The ongoing quarantine really gave Toronto-based actor-comedian-writer some time to work on her channel, which now features new comedy sketches every Thursday. But her most famous video to date is the three-minute Explaining the Pandemic to my Past Self, which was uploaded on April 9. With its very relatable content, we totally understand why it got 15 million views on YouTube.

Macoy Averilla first made waves in 2018 when he started dubbing funny Filipino lines over sequences of Mean Girls, Confessions of a Shopaholic, and The Devil Wears Prada—and so Macoy Dubs was born. The ongoing quarantine had him creating other relatable clips such as struggles in Zoom calls and pronunciations of university names. He's also recently created the Auntie Julie persona, the progressive tita we all need.