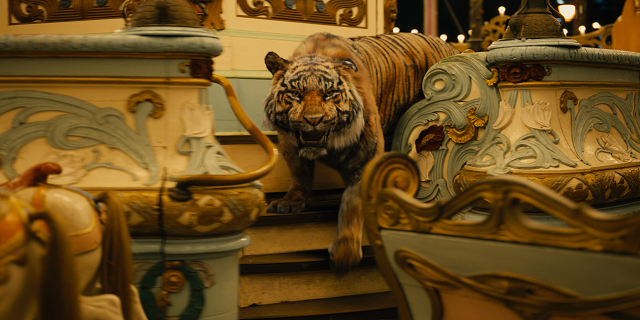 You remember this tiger, right?

(SPOT.ph) Sci-fi thriller series Alice in Borderland is one of the biggest binge-watches today—and the epic visual effects combined with the suspense-laden story is probably one of the main reasons why. We've already laid out how they managed to magic a deserted Shibuya Crossing in Tokyo into existence so this time we're zooming in on another cool VFX tidbit from the series: that tiger from the fifth episode!

For those who have been living under a Netflix-free rock for the past few weeks, we won't say much—but just know that the tiger was definitely not the friendly kind. Be wary of more spoilers ahead! The tiger popped up during one of the fight-or-die games of Borderland, where Arisu (Kento Yamazaki) and his friends, Karube (Keita Machida) and Chota (Yuki Morinaga), are stuck trying to survive, heck, maybe even win the strange game they're in.

Well, they clearly weren't able to put a real living tiger on a carousel just to shoot it for the series, but they were able to get an amazing VFX team to create the wild animal! And at the helm of the international effort—more on that later—was Dutch animation director Erik-Jan De Boer, who happens to have been one of the folks responsible for that awesome-slash-scary tiger in the critically-acclaimed 2012 film Life of Pi.

Remember that poignant tale of a boy stuck at sea with only a tiger for some form of highly debatable companionship? Remember how amazed we all were nearly a decade ago by the visual effects of that movie? Well, it looks like De Boer has upped the game a bit more these past years because he and his team were able to create an equally alive-looking one for Alice in Borderland! While Life of Pi used actual tigers on set at times—especially since Richard Parker was a main character in the story—the tiger in Alice in Borderland was made entirely using VFX.

And while the Alice in Borderland tiger was on-screen for just a few, pivotal moments, it still took one heck of a team to create. The effort was supervised by De Boer while production work was done by Indian animation and VFX studio Anibrain. All in all, the tiger was created by folks from four different countries: Japan, Singapore, the U.S., and India! Well worth it though, as we got some of the most hair-raising moments from that surprise tiger appearance. Now if only season two would come in faster.

Adventurer Savvy Alice In Borderland Netflix Streamings Services Vfx
Your Guide to Thriving in This Strange New World
Staying
In? What to watch, what to eat, and where to shop from home
OR
Heading
Out? What you need to know to stay safe when heading out