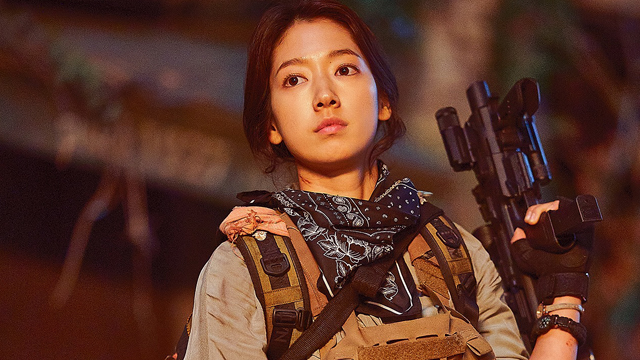 LOOK: Park Shin-Hye in Netflix's Sisyphus Is a Badass

You have to see her awesome customized machine gun.

(SPOT.ph) If Park Shin-Hye's track record of badass roles is anything to go by, then we definitely don't want to mess with her IRL either. And she's bringing her kick-ass abilities to the upcoming Netflix K-Drama Sisyphus! The streaming platform recently dropped our first look at the action series and we can't get enough of Park Shin-Hye holding a machine gun—complete with pink accents that somehow make her character look even more intimidating.

Who Does Park Shin-Hye Play In Sisyphus? Sisyphus Is a Badass

Our fave badass lead takes on the role of Kang Seo Hae, an elite warrior who happens to be from the future. She was sent back to protect for Han Tae Sul (Cho Seung Woo), a genius engineer troubled by the death of his brother—who inadvertedly stumbles upon a dangerous truth behind his sibling's passing.

Details have been kept under lock and key for the mysterious Seo Hae, but it looks like her ward, Tae Sul, is one heck of a VIP in the series. Tae Sul is the founder of an engineering company called Quantum and Time, which, despite being "The Miracle of South Korea's Engineering Industry," has actually been on the brink for the past 10 years—which is when his brother passed away.

Throwing things back to our Greek mythology lessons, Sisyphus was once a king whose treacherous ways—he managed to cheat death twice, so the myth goes—is given a very frustrating punishment in the afterlife. Zeus condemns him to roll a large boulder uphill, only to have it roll all the way back down once he reaches his goal, forcing Sisyphus to repeat the process again and again for the rest of eternity. We don't know exactly how this Greek myth will apply to the series, but we have a feeling it might have something to do with the time-travel aspect!

When Can We Start the Binge-Watching?

Sisyphus drops on Netflix on February 17. Best mark your calendars. In the meantime, check out the Korean teaser for the drama below. And yup, it looks like Seo Hae is a BTS stan, too! ARMY will definitely appreciate all the easter eggs here.

Adventurer Savvy Netflix Park Shin Hye Sisyphus K-drama Staying In Streaming Services
Your Guide to Thriving in This Strange New World
Staying
In? What to watch, what to eat, and where to shop from home
OR
Heading
Out? What you need to know to stay safe when heading out