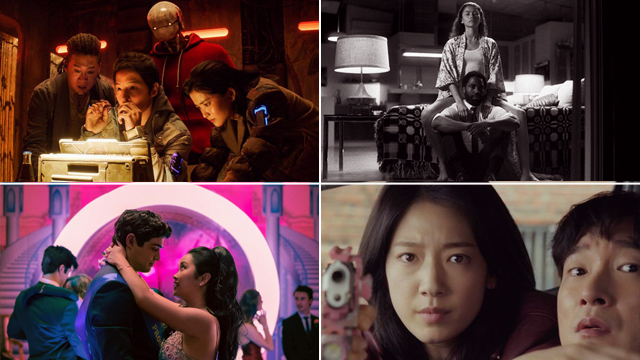 No better way to celebrate Valentine's!

(SPOT.ph) Valentine's Day is right around the corner—and whatever feelings this news brings you, well, just know that there will always be something new on Netflix to keep you company. The streaming platform is bringing a whole slew of new movies—To All The Boys is officially ending, folks—series, and more.

Mark your calendars for these exciting Netflix Shows this February:

The House Arrest of Us

Kathryn Bernardo and Daniel Padilla shot this fun series about a couple quarantined together with their crazy—and warring—families during the actual quarantine itself. You can catch the first season soon on Netflix!

Why you should watch it: Add some KathNiel to your watch-list for some quality wholesome content.

Song Joong Ki is back and this time he's a space pirate. He leads a crew of scavengers who stumble upon a harmless looking seven-year-old girl—who just so happens to be a literal robot-slash-weapon being hunted down by authorities. The wily crew decides to ransom the robot, only it looks like they've bit off much more they can chew.

Why you should watch it: South Korea has been winning at every genre, so we can't wait to see how they deal with sci-fi! Also, have we mentioned Song Joong Ki?

A filmmaker (John David Washington) and his girlfriend (Zendaya) return home following a celebratory movie premiere. While it is clear Washington’s character is bound for a career high, it looks like his love life takes a turn for the worse as the night begins to unravel all the tensions between the two.

Why you should watch it: Aside from seeing Zendaya take on another amazing role, this movie will be an “ode to the great Hollywood romances,” courtesy mainly of Director Sam Levinson and cinematographer Marcell Rev.

To All The Boys: Always And Forever

The love story of Lara Jean Covey and Peter Kavinsky (Lana Condor and Noah Centineo, respectively) comes to a close in the third installment of the To All the Boys franchise! The lovebirds' plans of going to the same college might not be pushing through, testing the limits of their relationship.

Why you should watch it: A sappy rom-com is exactly what you need this Valentine's. Trust us.

I Can See You: Love On The Balcony

Alden Richards and Jasmine Curtis-Smith star as could-be lovers in this series set during the pandemic. Curtis-Smith plays a medical frontliner who is neigbors with Richards, a wedding videographer. The two strike up an unlikely friendship—but it looks like Richards' character has a secret or two.

Why you should watch it: Richards just clicks with all the leading ladies he's been paired with so far so we can't wait to see how this pairing works.

Park Shin Hye stars in this dark sci-fi thriller as someone from the future! A genius engineer somehow stumbles upon dark secrets as he tries to uncover the truth behind his brothers' death—while also meeting a warrior who has traveled back in time.

Why you should watch it: Park Shin Hye has always played strong characters but this role might just let her action star side really shine for the first time.

This spin-off from JoJo's Bizarre Adventure: Diamond is Unbreakable dives into the Japanese love of the introspective (a.k.a. unique perspectives and observations only they could have come up with). Consisting of four episodes, the stories will revolve around the things artist Kishibe Rohan heard and saw on his tours collecting material for the manga.

Why you should watch it: This is one of the exciting titles Netflix touted for their 2021 anime slate.

I Care A Lot

Featuring Rosamund Pike, Peter Dinklage, and way too much vaping, this film tackles what happens when a hustler finds herself in hot water.  Pike's character deceives judges into making her legal guardian of the elderly—only her latest "victim" appears to have very strong connections.

Why you should watch it: Rosamund Pike and Peter Dinklage in a black comedy film. Do you really need any more reasons?

And because too much Song Joong Ki is always a good idea, he also stars in this upcoming Korean series. He takes on the role of a man caught in the middle of an Italian mafia war. He flees from his home in Italy to his South Korean birthplace where he finds more than one reason to stay.

Why you should watch it: We'll take whatever chance we can get to maybe hear Song Joong Ki speak Italian.

Quark Henares' 2011 movie about music-obsessed friends forming a band and trying to make their mark on the local underground scene is back!

Why you should watch it: The 2000s called—and they want you to watch this fun indie and remember the good old times.

Adventurer Savvy Seasoned Netflix K-drama To All The Boys Space Sweepers Kathniel Malcolm & Marie Streaming Services
Your Guide to Thriving in This Strange New World
Staying
In? What to watch, what to eat, and where to shop from home
OR
Heading
Out? What you need to know to stay safe when heading out