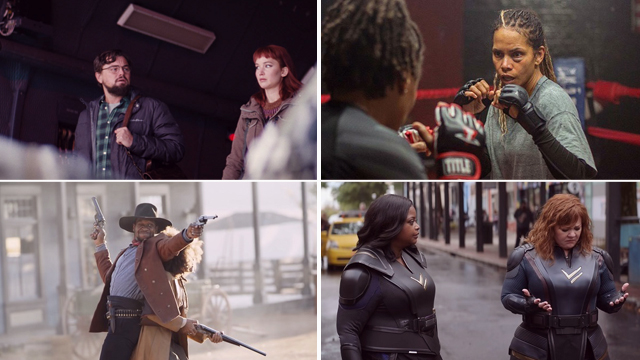 10 Exciting Netflix Movies of 2021, Ranked By How Many Brain Cells Are Needed to Watch It

A.k.a. Least to most stressful.

(SPOT.ph) There are two types of movie watchers: those who watch to go on a short high and land safely back down, and those who watch to have their brain cells smacked around a little bit. Wherever you fall on that spectrum, Netflix’s promise of a new movie every week for 2021 has your cinematic fix covered. And to help you along, we’ve rounded up the most exciting titles on their slate so far—and then ranked them based on that scale (Read: Least to most stressful, in a manner of speaking). Use this as your handy guide for whether or not to mark your calendars for the next big Netflix flick.

Prep yourself for 10 of Netflix’s most exciting movies for 2021:

This Melissa McCarthy and Octavia Spencer starrer is shaping up to be a fun, kid-friendly superhero ride; campiness may or may not be on purpose, but will always be welcome. The two play estranged childhood besties who reunite after super-villains take over their world. One finds a way to become super herself, and brings along her best friend for the heroic ride. Edna Mode would appreciate the fact that their hero uniforms don’t have capes!

9. To All the Boys: Always and Forever

Goodbyes suck, so the last movie—so far!—for the To All the Boys franchise will definitely be taxing on the feelings. Lara Jean Covey and Peter Kavinsky (Lana Condor and Noah Centineo, respectively) are all set to go to the same college and spend their time making puppy eyes at each other, but it looks like life might just lead them down separate paths. We’re prepping some tissues for this one.

If you liked how stressed out you were while watching Extraction, then you may want to check out Netflix’s next action flick starring Chris Hemsworth. Escape from Spiderhead is shaping up to be a dystopian movie where two convicts—one presumably being Hemsworth—find themselves in a facility where they become lab rats for emotion-altering drugs. Miles Teller has also been confirmed for the movie. So we’ve got big pharma, a dystopian setting, and Hemsworth presumably beating up a lot of bad guys while on some weird advanced drug; sign us up for this wild ride.

Dwayne “The Rock” Johnson continues his no-fail streak of tough-guys-with-good-hearts role in this action-comedy flick. Joining his FBI profiler character to hunt down the world’s most wanted—hence the Interpol-issued “Red Notice”—are two rival criminals, played by Gal Gadot and Ryan Reynolds. TBH, we’re dying to see how this trio’s dynamic will play out, and how Deadpool will manage to slide his usual R-rated antics in. Keep the kiddies to Thunder Force!

6. The Harder They Fall

Information about this release has been kept behind closed, fortified doors but Netflix’s teaser dropped some pretty tension-filled clips from the movie! This Western—yes, as in the old-timey genre—stars Jonathan Majors as outlaw Nat Love, a man on a mission for vengeance. He rounds up his friends and together they hunt down an old enemy, Rufus Buck (the always badass Idris Elba). Regina King will also be joining the cast! From the looks of it, we say don’t expect mindless action from this one.

Lin-Manuel Miranda is dropping his directorial debut in 2021! And he’s bringing with him one heck of a cast for his film adaptation of the staged musical, including Andrew Garfield, Alexandra Shipp, and Vanessa Hudgens. The semi-autobiographical musical by Jonathan Larson revolves around an aspiring theater composer named Jon who realizes—thanks to the impending doom of his 30th birthday—that his dreams may not be all that worth it after all. If you don’t want your own existential crisis to reflect back to you on-screen, then we suggest you keep away from this one.

Halle Berry is joining Miranda on the list of Netflix’s first-time directors this 2021, though this one premiered in September 2020 at the Toronto International Film Festival. Bruised follows disgraced mixed martial arts fighter Jackie Justice (played by Berry!) at a crossroads: she must fight a rising star of the ring while dealing with the return of her six-year-old son. The Oscar-winning actress reportedly broke some bones while filming—she was up against UFC champion Valentina Shevchenko—so we’re expecting the same kind of hardcore ride while watching.

Okay, so this one is bound to be more taxing on the heart than on the brain, but Zendaya in black-and-white is sure to be worth it. A filmmaker (John David Washington) and his girlfriend (Zendaya) return home following a celebratory movie premiere. While it is clear Washington’s character is bound for a career high, it looks like his love life takes a turn for the worse as the night begins to unravel all the tensions between the two. Director Sam Levinson and cinematographer Marcell Rev have teamed up to deliver this “ode to the great Hollywood romances,” as the Netflix’s summary goes.

Cate Blanchett, Jonah Hill, Himesh Patel, Timothée Chalamet, Ariana Grande, Kid Cudi, Tomer Sisley, Rob Morgan, Matthew Perry, and the unexpected duo of Jennifer Lawrence and Leonardo DiCaprio. These are all the starry names to expect in this political satire directed by Adam McKay, which follows two low-level astronomers tasked with warning the world of an approaching apocalypse-level comet. TBH, our brain cells might have a hard time just keeping up with all the faces that are bound to pop up, and dealing with how terrible the world is in general—even if it is just satire—is bound to add some well-worth-it stress.

1. Woman in the Window

Amy Adams and her insanely expressive eyes are set to keep you on the edge of your seats all throughout this psychological thriller. Adams stars as an agoraphobic woman living alone in New York who witnesses something she shouldn’t have through her neighbor's windows. Think Hitchcock, but modern—and possibly more gruesome. Adams is joined by Gary Oldman and Julianne Moore as a trio of central characters, and that epic combination is already more than enough to get us ready to stress out a whole lot of brain cells.

Adventurer Savvy Seasoned Netflix Streaming Services Gal Gadot Ryan Reynolds Amy Adams The Woman In The Window Thunder Force To All The Boys: Always And Forever Lana Condor Escape From Spiderhead Red Notice The Harder They Fall Tick Tick Boom Lin Manuel Miranda Bruised Malcolm And Marie Zendaya
Your Guide to Thriving in This Strange New World
Staying
In? What to watch, what to eat, and where to shop from home
OR
Heading
Out? What you need to know to stay safe when heading out