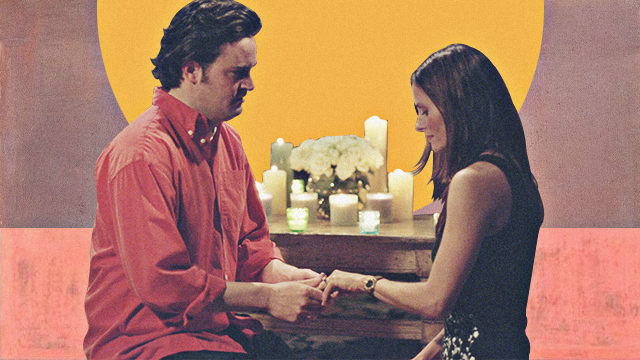 10 Most Epic TV Proposals to Relive on Netflix

(SPOT.ph) In a fictional world where all things are perfect, the most romantic moments come down to three things: the meet-cute, the wedding, and the in-between (a.k.a. the proposal). The latter, which comes with a big question that’s about to change the rest of the couples’ life, can be a grand gesture with a flash mob or an intimate scene with the sweetest exchange of lines. If you’re looking to binge-watch on Netflix, watch for these special episodes that will make you believe in love all over again.

Also read:
10 Rom-Coms You Can Watch By Yourself
10 Toxic Couples From Pop Culture to Remind You How Great Being Single Is
10 Fictional Exes That Will Make You Think "What If"

Check out these swoon-worthy wedding proposals on TV:

In Friends' season six episode "The One with the Proposal" (obviously), Chandler Bing (Matthew Perry) plans a big wedding proposal for Monica Geller (Courteney Cox) in a restaurant. But the plan fails when Monica's ex-boyfriend Richard (Tom Selleck) walks in right before he pops the question (and eventually walks back into her life). But after much confusion, Monica surprises Chandler with a proposal where she gets down on one knee in their apartment filled with candles.

How I Met Your Mother’s Barney and Robin

How I Met Your Mother's most unlikely couple, ladies' man Barney Stinson (Neil Patrick Harris) and skeptical Robin Scherbatsky (Cobin Smulders), gets engaged in the special two-part hour-long episode titled “The Final Page” in the eighth season. The final page in Barney's playbook, turns out, is an intricate plan where he gets back together with Robin, asks her to marry him, and "[hopes] she says yes."

In Grey's Anatomy's season six episode 19, neurosurgeon Derek Shepherd (Patrick Dempsey) a.k.a. McDreamy doesn't go down on one knee nor even pops the question. Instead, he brings Meredith Grey (Ellen Pompeo) into a hospital elevator plastered with CT scans and case reports that the two worked on together, reminding her of her strength not only as a fellow surgeon but also as a person. “If there’s a crisis you don’t freeze, you move forward. You get the rest of us to move forward because you’ve seen worse, you’ve survived worse,” he says. His big speech is capped off with a declaration: “I want to spend the rest of my life with you.”

How to Get Away with Murder’s Connor and Oliver

How to Get Away with Murder (HTGAWM) may be plenty of dark and twisty, but in the middle of it all is the romantic storyline between Connor Walsh (Peter Nowalk) and Oliver Hampton (Conrad Ricamora). In the season three finale, Oliver proposes to Connor with a frantic "We could move to California, we could make a million babies if you want. Marry me. I mean it. Marry me." There was a lot of breakups and fighting after, but Connor "reproposes" to Oliver in season four's seventh episode where he takes out a twisty-tie taken from a loaf of bread. "Marry me so I can spend the rest of my life trying to make you as happy as you make me," Connor tells Oliver. Of course, in true HTGAWM fashion, we don’t get a happy “yes”—at least not until five episodes later.

Mike Ross' (Patrick J. Adams) proposal to Rachel Zane (Meghan Markle) in Suits' season four finale is nothing grand, but nonetheless romantic. "I don't want to go 40 years wondering why I didn't do this sooner," he starts while holding his grandmother's ring. Mike reveals that his grandmother wore it every day for almost 60 years to which Rachel says: "So will I."

Luke Danes (Scott Patterson) and Lorelei Gilmore (Lauren Graham) have the most complicated relationship in the 2000s TV series Gilmore Girls. Right from the start, the whole of Stars Hollow thinks that they're more than just friends, which they would often deny. After a series of twists and turns, they eventually end up together and get engaged with not much fanfare. Lorelai asks, "Luke, will you marry me?" as if she was just asking for coffee at her favorite diner.

In Big Bang Theory's surprising season 12 finale, Sheldon Cooper (Jim Parson)—who we never thought would want to get married, let alone have a girlfriend—proposes to Amy (Mayim Bialik). For a little backstory: Amy leaves Sheldon alone in their California apartment for a three-month teaching gig at Princeton. Bored and alone, he starts spending more time with Ramona Nowitzki (guest star Riki Lindhome), who kisses him on the lips. Sheldon, all shocked, leaves, gets in a taxi, goes to the airport, buys a plane ticket, and flies to New Jersey to go down on one knee in front of Amy's door. It should be noted that Sheldon isn’t too keen on riding a public taxi and flying across the country by himself.

Orange Is the New Black’s Piper and Alex

Piper Chapman (Taylor Schilling)'s big question to Alex Vause (Laura Prepon) was: "Will you be my partner through love, through pain, and through beauty fish, forever?" This harks back to their pre-prison days when Piper had a fish tattoo inked on the back of her neck, which supposedly symbolizes beauty; Alex, on the other hand, has a "Love is Pain" tattoo in response to the beauty fish.

It is a Halloween tradition at the 99th Precinct to hold the annual Halloween Heist, which decides who is the Ultimate Detective Slash Genius (seasons one to three), and later the Ultimate Human Slash Genius (seasons four to seven). But the fifth edition is a lot more special because it's where Jake Peralta (Andy Samberg) and Amy Santiago (Melissa Fumero) get engaged. Jake plans and uses the heist to surprise Amy with an elaborate proposal that culminates in the evidence room.

In the first episode of Modern Family's fifth season, Cameron Tucker (Eric Stonestreet) and Mitchell Pritchett (Jesse Tyler Ferguson) are excited about the news that same-sex marriage is finally legal in California. They each plan how to propose to the other, even asking their respective families for help. The numerous attempts on grand gestures all fail, but it doesn't matter since it all boils down to a mistaken proposal while both are on their knees to change a flat tire. Right there on the road, they just look at each other—no questions necessary—and say "yes" at the same time.

Wedding Netflix Streaming Roundup Staying In Adventurer Savvy Seasoned Evergreen Guide Grey's Anatomy How I Met Your Mother Friends Modern Family How To Get Away With Murder Suits The Big Bang Theory Brooklyn Nine Nine Orange Is The New Black Streaming Services
Your Guide to Thriving in This Strange New World
Staying
In? What to watch, what to eat, and where to shop from home
OR
Heading
Out? What you need to know to stay safe when heading out