To All the Boys on Netflix: Which Is the Best Film?
Loading
Already a member? Log in
No account yet? Create Account
Spot.ph is your one-stop urban lifestyle guide to the best of Manila. 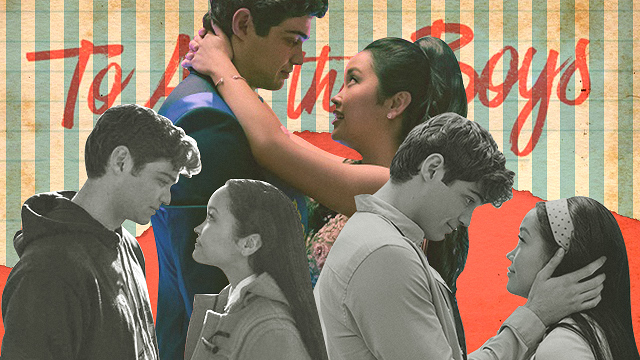 Smackdown: The To All the Boys Trilogy

To fill that LJ + PK sized hole in your heart.

(SPOT.ph) Well, it’s official. The To All the Boys trilogy has come to a sweet, sweet end—leaving us all with a LJ+PK sized hole in our hearts. Always and Forever has come to round out the most swoon-worthy YA movie adaptation to hit our screens recently and while we did get our closure, we definitely think a little more TATB content is totally okay.

So we’re about to do the unthinkable: lay down all three movies of Lara Jean and Peter Kavinsky’s (Lana Condor and Noah Centineo, respectively) romance and find out which one comes out of this rom-com boxing match victorious. We’re talking kilig factor, plot points, character development, and yup, we’re going to throw in Centineo’s curls too, because dang, that thing had an entire role all on its own. Beware of spoilers if you haven’t watched the finale yet!

Also read:
10 Things We’ll Miss the Most About To All the Boys
The 10 Stages of Watching To All the Boys: P.S. I Still Love You
Lana Condor, Noah Centineo, Ross Butler: On Love Letters, Life Lessons, and Going to Prom
Smackdown: Gossip Girl vs. Bridgerton
Smackdown: Nam Do San vs. Han Ji Pyeong of Netflix's Start-Up

From To All the Boys I’ve Loved Before to Always and Forever: Which movie gets the most points?

We’re going all in right away: Condor and Centineo definitely know how to get hearts fluttering so every movie is chock-full of the sweetest moments. Remember when the first movie came out and for the next few months that GIF of Peter pulling that hand-in-back-pocket-then-twirl move was everywhere online? We could not get enough. The next two movies did not disappoint either. From P.S. I Still Love You’s necklace moment—which we know is cliché but dang, Peter didn’t have to do that cute neck kiss, did he?—to Always and Forever’s nose-rubbing good night kiss. The way Lara Jean said “Good night” shouldn’t be legal.

The cutest moments had the butterflies in our stomach turning into industrial-strength fans—but we have to hand it to the first movie for setting off absolute tornadoes. Look, it was the first movie, and like all firsts—we’re talking rom-coms here—it was special. Nothing will beat their totally out-of-the-blue first kiss, Kavinsky doing that back-pocket spin, their first party together—albeit as a fake couple—the hot tub scene that almost walked into SPG territory (they’re still minors, people) and that incredibly sweet final scene on the lacrosse field! We could go on and on.

Condor and Centineo’s insane chemistry was cemented, chain-bolted and then welded into our brains, courtesy of To All the Boys I’ve Loved Before. Case in point: The so-cute-it-can’t-be-real story behind the adorable lock screen picture on Lara Jean’s phone; that wholesome snap of the two napping on a couch with Lara Jean all comfy in Peter’s arms was not staged. It is actually a picture a crew member took of the two stars taking a nap backstage in between takes, as director Susan Johnson told Entertainment Tonight. We repeat, they really just “hang out” like that.

Winner: To All the Boys I’ve Loved Before

The first movie perfectly played out that fake-relationship-turned real trope, the second went down the third-party path, and the third movie captured that “end of high school” feeling just right. LJ and PK went through a whole lot in just three movies. If we’re talking about a prime teenage romance story though, the first movie once again, just takes the cake—in a good way. Look, teen rom-coms are known for their outrageous premises (Read: Everything from 10 Things I Hate About You to Mean Girls to The DUFF) and their success usually banks on how well we fall for their borderline crazy but totally romantic ploys—which is kind of where the second and third movies fall off the wagon a bit.

We’ve heard of on-again-off-again relationships, but LJ and PK getting together again so smoothly after having terrible fall-outs just seems too good to be true. And while Always and Forever is believable enough—especially for a young couple in love, yes, call us bitter—the second one left way too many unanswered questions. Kavinsky started off his role as Lara Jean’s boyfriend very, very badly.

Can we just repeat the fact that he was waiting for Gen (Emilija Baranac), his ex, in that hot tub? Did he really take the necklace back and then leave her? Also, where did John Ambrose McClaren (Jordan Fisher) come from and where did he go? If he moved out of town but still remained near enough to volunteer at the same place as Lara Jean, then why did it take so long for his letter to arrive? Is the U.S. postal system that bad? And who the heck is Stormy and why is she so perfect? If anything though, we have to give a shoutout to that growth in former bestie Gen and Lara Jean's relationship.

The best part about the first To All the Boys is that, for some reason, we totally believe everything. Lara Jean falling for her sister’s ex who is now her best friend, the stereotypical jock with amazing hair partnering with the introvert for a fake relationship to make the hot but mean chick jealous, 16-year-olds somehow being this put-together and even attractive? Yeah, okay.

Back-to-Back Winner: To All the Boys I’ve Loved Before

Nothing like seeing your fave characters grow up in front of your very eyes—so much easier than doing it yourself. Random attack aside, it’s no secret that both LJ and PK learned a lot in all the movies. The first movie touched on Peter’s parents divorcing, LJ coping with her sister moving overseas, the death of her mom, and of course, the couple’s complicated relationship with Gen. The set-up was great groundwork for the next two movies—especially the third one.

We really don’t know what happened in P.S. I Still Love You, the second film, where Peter made all the possible missteps you could make. So after he accidentally lets drop that he wasn’t even waiting for Lara Jean in the hot tub and then lying to her about where the hot tub video came from, did anyone else feel stone-cold shock when he actually took back the necklace and then just left LJ standing there? And then LJ still chose him? Yeah, we didn’t really get that. Granted the movies were told through Lara Jean’s perspective, so we’re hoping we really missed something big here. Thankfully, the third movie gave us the redemption arc Peter definitely needed.

“You can’t save this relationship by not growing,” Lara Jean’s father tells her as she contemplates her and PK’s future and yup, that’s all you really need to hear to know which movie won this round. Sure, Peter once again goes the questionable route when Lara Jean says she wants to go to a different university—but his talk with his own father knocked a whole lot of sense into him. Folks, it’s all about learning from your mistakes, and more importantly, not doing the wrong thing again. Plus, that contract redo just had us hook, line, and sinker.

Winner: To All the Boys: Always and Forever

Who are we kidding? A+ all around, and another set for Lara Jean’s vintage chic wardrobe. The only thing we needed more of was Kavinsky’s signature “Whoa, whoa whoa” which sadly disappeared in the next two movies.

Grand champion: To All the Boys I’ve Loved Before

You know what they say, first love never dies. While you could sit down and binge-watch the entire TATB trilogy (because why not), there’s no denying the first one could definitely stand on its own.

Adventurer Savvy To All The Boys Netflix Streaming Services Lana Condor Noah Centineo Rom-coms Staying In
Your Guide to Thriving in This Strange New World
Staying
In? What to watch, what to eat, and where to shop from home
OR
Heading
Out? What you need to know to stay safe when heading out