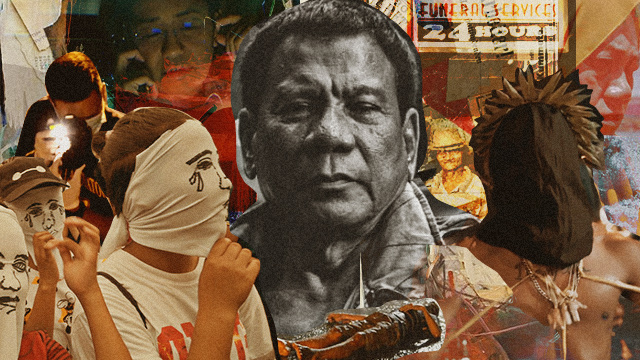 10 Riveting Documentaries to Watch in Time for the EDSA Anniversary

Put these titles on your watch-list.

(SPOT.ph) The past few years in the Philippines have been eventful—to say the least—so it is no surprise that several documentaries have popped up recently, covering everything from the “war on drugs” to the death of Jennifer Laude. For this list, we round up must-watch documentaries from both foreign and local productions, ideally to help you make sense of what the heck is happening, still happening, right in time for the 35th anniversary of the People Power Revolution. Look, all we’re saying is that there’s nothing like a good deep dive into a topic via a well-made documentary to keep your brain cells kicking.

Put these 10 foreign and Filipino documentaries on your must-watch list:

Where to watch: Apple TV

Effectively blurring the lines between Filipino folklore and the harsh realities of the “war on drugs,” this critically acclaimed 2019 documentary is not to be missed. It presents the first few years of the president’s administration through the narratives of three different Filipinos just trying to live: Brother Jun Santiago, a street kid named Jomari, and a woman who was imprisoned in a secret jail behind a bookshelf in a Tondo police station.

Why you should watch it: This globally recognized documentary was directed by a Filipina, Alyx Ayn Arumpac, giving this feature a more direct take on the events of the past few years, one that is sure to resonate.

National Geographic’s documentary follows a group of photojournalists, led by RL, a former staff photographer for a big newspaper, as they document the nightly killings that were rampant during the first years of the “war on drugs.” The group’s mission is to expose the true cost of the so-called war.

Why you should watch it: We know you remember the harrowing photographs of a woman cradling the body of her slain partner, as taken by photojournalist Raffy Lerma in July 2016. Dive deeper into the story behind that photo, and many more like it, in this documentary.

Where to watch: Previously screened on Daang Dokyu’s website.

What happens to the children of those killed in the drug war? This is the tale Alunsina presents. Directed by Kiri Luch Dalena, this topsy-turvy feature documents the story of seven children left in their grandmother’s care after their mother was falsely accused of selling illegal drugs and their father was killed during a police operation in 2016.

Why you should watch it: Alunsina is far from the usual detached documentary. It is an unfiltered, almost emotional look into the seemingly mundane lives of seven children—after having lost their parents for reasons they can’t comprehend.

Another foreign-produced documentary on the drug war that made waves globally is PBS’s feature, On the President’s Orders. This documentary zeroes in on Duterte’s “war on drugs” and the orders he gave that started the so-called crusade. It focuses on the “tokhang” operations in Caloocan, where in 2017, teenagers Kian delos Santos (17), Reynaldo de Guzman (14), and Carl Arnaiz (19) were shot dead by police forces.

Why you should watch it: This documentary dives deep into the experiences and perspectives of two different sides, police forces, and the people they were tasked to protect—who now fear them.

Misinformation, social media, and the press come together in another FRONTLINE documentary, this time with a focus on journalist Maria Ressa. This critically acclaimed documentary directed by Ramona Diaz is arguably one of the most popular documentaries on the Philippines—and the state of the press—in recent years.

Why you should watch it: It is no secret that social media—and how information is spread—has been a major factor in the administration’s hold on people. This documentary goes beyond Ressa’s story and into the inner workings of why this is so.

Where to watch: Viva Max

This expansive look into the death of transwoman Jennifer Laude at the hands of a U.S. Marine came out in 2018—two years before Joseph Pemberton, convicted killer, was granted full pardon by the president in September 2020.

Why you should watch it: This PJ Raval film hinges on the murder of Laude to discuss something much bigger, from the experiences of the LGBTQ to the centuries-old tension between the U.S. and the Philippines.

Where to watch it: The Presidential Communications Operations Office Facebook page

The government has also come out with their own documentary chronicling their “war on drugs,” zeroing in on the effects of illegal drugs and reformed users. This documentary was produced by the Presidential Communications Operations Office in 2019 and even has a sequel called Gramo Dos: Unipormado.

Why you should watch it: There are always two sides to a coin.

Where to watch: German Documentaries

The Marawi siege lasted for five long months in 2017. Years later, the people of Marawi are still struggling to create a home out of the shell that used to be their city. This documentary follows different people from Marawi, a young  couple, a once-wealthy woman, a driver, and more, as they return to what was once their home.

Why you should watch it: This internationally acclaimed film takes the silent route as it pensively explores the thoughts, hopes, emotions, and dreams of people who have lost practically everything.

There’s no doubt you have seen the face of Mang Orly Eusebio before. The owner of a 24-hour funeral parlor in Manila has been documented many times by the press before, and has even shown up in several documentaries, as his shop has become a sort of dumping ground for the many bodies that turn up dead in the night.

Why you should watch it: This 25-minute short documentary is a close and humanizing look at the “mortician of Manila” as he comes to terms with the many victims of the drug war—all while being a Duterte supporter himself.

Where to watch: Netflix; Season 5 Episode 2

Raphael Rowe starts his stint in Manila by tagging along with a police force as they raid a pregnant woman’s house—she's suspected of dealing illegal drugs. Rowe, who goes around the world uncovering what it’s like in different prisons, then spends the next few days at the jam-packed Manila City Jail—where months before, gang wars resulted in the deaths of at least two inmates. He explores the unique dynamics in this notorious jail, with the massive crowding pointing to the alleged quota police forces are given.

Why you should watch it: The Manila City Jail operates unlike any other, and Rowe gives you front-row access to what it's like behind the Philippines’ most notorious prisons.

A House In Pieces Alunsina Mortician Of Manila Streaming Services Netflix Duterte Documentaries Seasoned Savvy Adventurer Gramo Pcoo A Thousand Cuts Maria Ressa On The Presidents Orders Frontline National Geographic Aswang Guide Greener
Your Guide to Thriving in This Strange New World
Staying
In? What to watch, what to eat, and where to shop from home
OR
Heading
Out? What you need to know to stay safe when heading out