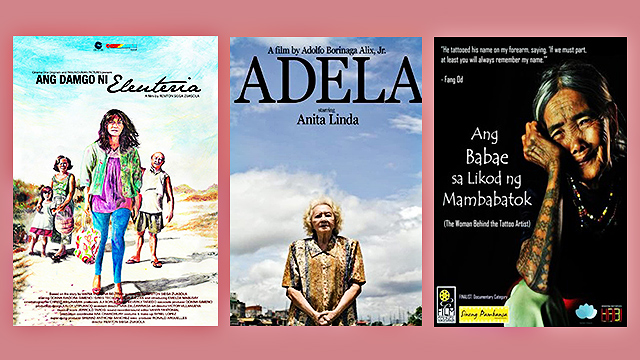 Plus dokyus and classics by Lino Brocka and Peque Gallaga.

(SPOT.ph) A lady celebrating her 80th birthday alone, the last mambabatok of Kalinga, a bride setting off to marry a foreign man she has never met—catch all these stories of Filipina women and more as the Film Development Council of the Philippines puts up several movies online this Women's Month.

Dubbed "Juana sa Gitna ng Pagbabago," this film fest carries 10 titles all about Filipina women. Hard-to-find indies like the award-winning Adela and classics by Lino Brocka and Peque Gallaga are available on the Film Development Council of the Philippines' (FDCP) streaming platform; you can watch the films on-demand for P99 a month.

The late Anita Linda stars as Adela, an elderly woman living in the slums. This acclaimed indie unfolds pensively throughout her 80th birthday as she waits in vain for her children to come celebrate with her on the special day.

Fang-Od is known as the last traditional tattoo artist of the Kalingas. This documentary by Lauren Sevila Faustino dives deep into the story of the woman behind the celebrated skill.

A dance or a dream, or both, is exactly how this indie plays out as Eulateria, a simple island girl leaves her hometown to marry a foreigner. This film is presented in a single take, from the moment she wakes up and makes her way to the boat that will most likely take her away forever—right as her town is in the midst of a fiesta.

An overseas Filipino worker is celebrating her homecoming with her family—when police suddenly appear on their doorstep. A newborn has been found in the trash bin of an airplane toilet and she, Mercy Agbunag, is a suspect.

Different stories of trafficked children come together in this hard-hitting documentary film.

Directed by Sigrid Andrea Bernardo, this comedy drama revolves around a woman going through a midlife crisis. Now in her 60s, Lorna has just found an online lover.

This Lino Brocka classic takes on the underbelly of Manila through the eyes of Julio, a fisherman scouring the city streets looking for his beloved, Ligaya, who had earlier gone to the city in search of a better life.

Another Brocka work, this time about three girls from the province who head to Manila also in search of a better life—and end up part of the sex trade.

Dodong is a young drag queen who runs away from his father and ends up in the jungle. There, he sobs to a star—and then somehow becomes pregnant.

Directed by Peque Gallaga and Lore Reyes, Sonata revolves around an opera diva who has lost her voice. On the verge of a breakdown, she returns home to Negros Occidental where she crosses paths with a young boy who helps change her perspective.

Adventurer Savvy Streaming Services Film Development Council Of The Philippines Fdcp Staying In Indie Whang-od Peque Gallaga Lino Brocka
Your Guide to Thriving in This Strange New World
Staying
In? What to watch, what to eat, and where to shop from home
OR
Heading
Out? What you need to know to stay safe when heading out