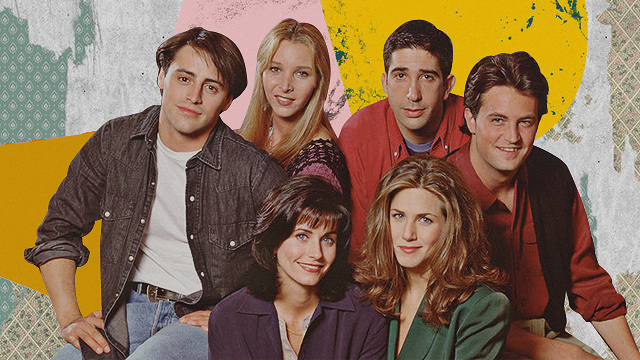 Can you imagine Phoebe Buffay as a goth girl?

(SPOT.ph) If you’re not re-watching Friends all over again, chances are you’re probably reading up on all kinds of articles, watching supercuts, stalking the cast on IG, and the like. We totally get it; it’s hard not to obsess over the mega-popular sitcom. But if you feel like you already know everything there is to know about the show and the irreplaceable cast—Jennifer Aniston as Rachel Green, Courteney Cox as Monica Geller, Lisa Kudrow as Phoebe Buffay, Matt LeBlanc as Joey Tribbiani, Matthew Perry as Chandler Bing, and David Schwimmer as Ross Geller—then why not put your knowledge to the test? We round up a couple of tidbits about the show below.

Also read:
It's Official: You Can Stream the Friends Reunion Legally in the PH
10 Fun Finds for the Ultimate Friends Fan
10 Friends Quotes You Can Use in Life
WATCH: Half of Friends Just Had a Mini-Reunion for the Emmys

You’re a true super fan if you already know all these 10 lesser-known Friends facts:

Jennifer Aniston's dad is an actor on the Days of Our Lives show.

Yup, Days of Our Lives is an actual U.S. TV soap on NBC, the channel where Friends originally aired. And you probably know Aniston is of Greek descent. Her father, John Aniston was born in Greece and migrated to the U.S. with his family when he was a kid. So here’s the fun connection: John is also an actor known for playing Victor Kiriakis on the incredibly long-running Days of Our Lives (Victor’s first appearance was in 1985!). If she ever does a cameo, she had better bring LeBlanc along.

Remember when Rachel tried to surprise then-boyfriend Joshua (Tate Donovan) with a sexy nightie—and then he walked in with his parents in tow? Surprise! Joshua’s dad was played by Perry’s real-life father, actor John Bennett Perry. Perhaps it’s because the father-son duo were not in the scene together but it really should have been obvious. Not only do they look very similar, they’ve both got excellent comedic timing.

Even the cast was against the Joey-and-Rachel pairing.

The last few seasons of Friends went the unexpected route when the story had Joey falling for Rachel—and it wasn’t just the viewers who were shocked. “It felt wildly inappropriate,” LeBlanc told Vanity Fair in 2012. “I was like, ‘That’s Rachel. She was supposed to be with Ross. Wait a minute.’ Everybody got super defensive about the whole thing.”

LeBlanc added that the gang even went to the writers, David Crane and Marta Kauffman, to say “We’re really concerned about this. It doesn’t feel right. We have a problem with it.”

The frame around Monica’s apartment door’s peephole was a broken set piece.

Everything about Monica’s apartment was awesome—including the now-unforgettable yellow frame around her main door’s peephole. Turns out, this cool little detail was the result of an accident. The frame originally held a mirror, that is until a member of the crew accidentally broke it. Instead of throwing the entire thing away, they decided to put the frame on the door, and the rest, as they say, is history.

The cast starred in Diet Coke commercials as their characters in the '90s.

Riding on the success of their first season, the Central Perk gang showed up as their characters in a series of commercials for Diet Coke in the U.S. This move, despite the huge pay, became one of showrunner David Crane’s biggest regrets. It “put the show at risk” for commercialization (think pesky product placements).

The opening credits sequence at the fountain was not fun for the cast.

Let’s set the scene. It is the early '90s. The cast of Friends only just kind-of, sort-of know each other and are currently drenched in a fountain somewhere in the Warner Bros. lot in Burbank, Los Angeles (Nope, not New York City!), trying to pretend they’re having a good time. Oh, and did we mention it is 4 a.m. on a chilly summer night? That’s pretty much how filming went down for the Friends opening theme.

At some point, the gang was just standing there, miserable and pruny, awaiting instructions in their wet black-and-white party outfits when Matthew Perry blurted out, “I don’t remember a time when I wasn’t in the fountain.” It was a great signal of how their dynamics would play out for the next decade or so.

They're not fans of the theme song either.

And here’s a heartbreaker. In 2016, Aniston dropped a bomb while on BBC talk show, The One Show, by saying that “No one was really a big fan of that theme song.” To be fair, the song has probably followed the cast wherever they've gone since the '90s. How many fans do you think do the clap-clap-clap thing when they meet them? We can’t say we’d be able to stop ourselves either. Plus, Aniston’s part-touched, part-annoyed reaction to her We’re the Millers co-stars pranking her with The Rembrandts hit was definitely telling.

Bruce Willis guest-starred because he lost a bet to Matthew Perry.

Bruce Willis appeared in Friends season 6 as Paul Stevens, who dated Rachel while his daughter dated Ross. Toxic. We know. How this action star landed on the sitcom has been a thing of fandom lore for years. Many said he and The Whole Nine Yards (2000) co-star Perry simply thought it would be fun while others said it was because he lost a bet. Willis cleared it all up in a 2018 interview with Wired where he stated that “I was on Friends because I lost a bet to Matthew Perry.” Plus, he reportedly donated all his earnings from the Friends stint to several non-profits.

Monica was supposed to end up with Joey as the show's main couple.

Remember “The One with the Flashback” in season three? When poster boy Joey stripped down to nothing after Monica invited him in for lemonade after they pretty much just met each other? Yup, that could have developed into a real thing had the original storyline been followed. While in development, the writers saw Joey and Monica not just as a couple, but as the main couple of the show. They changed their minds after the first few episodes revealed the cast’s awesome chemistry. Thank goodness.

Adventurer Savvy Seasoned Friends Nostalgia Jennifer Aniston Courteney Cox Phoebe Buffay Matthew Perry Matt Le Blanc David Schwimmer Staying In Heading Out
Your Guide to Thriving in This Strange New World
Staying
In? What to watch, what to eat, and where to shop from home
OR
Heading
Out? What you need to know to stay safe when heading out