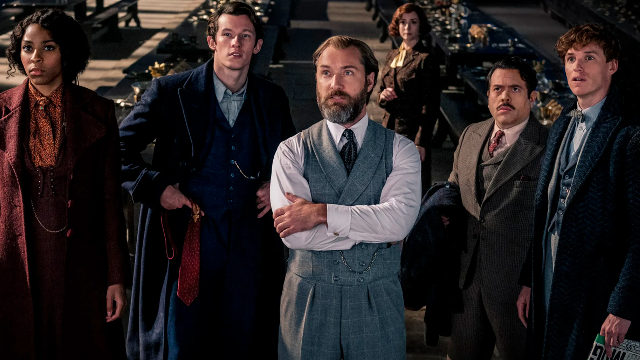 Fantastic Beasts: The Secrets of Dumbledore Suffers Being a Boring Middle Chapter

Does the OG Dumbledore's Army live up to the name?

(SPOT.ph) Middle chapters of sagas are often the trickiest films to get right when producing a series. The ambitious approach usually results in films like Empire Strikes Back, wherein themes and learnings from the previous film are challenged and characters are pushed into uncharted territory, which lays the groundwork for dynamic drama in a sequel. On the other hand, the lesser filmmaker could instead deliver films like Iron Man 2, a filler sequel riding off the success of the original, uninterested in delving deeper into either character or theme.

Enter Fantastic Beasts: The Secrets of Dumbledore, the third film in a five-part prequel saga to the Harry Potter series, centered around the magic zoologist Newt Scamander (Eddie Redmayne) and his attempts to foil criminal Grindelwald (Mads Mikkelsen) from igniting a war within the Wizarding World.

Is Fantastic Beasts: The Secrets of Dumbledore Worth Seeing in the Cinema?

Picking up directly from the end of The Crimes of Grindelwald, the film starts off with a promise of epic proportions; good and evil on both sides and Dumbledore’s Army ready to launch a full counter-offensive against Grindelwald. However, it becomes increasingly clear as the film progresses that screenwriter J.K. Rowling and company have no further interest than to keep it as a filler middle chapter in the series with only teases that something much more epic is coming in the later two installments.

The conceit of the film’s plot is that Scamander and his allies must take on a series of random side quests so as to become unpredictable by Grindelwald (who can see mere glimpses of the future), with the full plan being only known by Dumbledore (Jude Law) himself. The conceit makes the film unnecessarily convoluted, with sub-plots that lead nowhere and misdirects that are neither exciting nor dramatically compelling.

A recurring line in the film is that “Not everyone can know the full plan,” not even Scamander himself, but the “full plan” never fully realizes itself, as the protagonists run from set piece to set piece reacting to problems they encounter on their adventure. At a certain point, one would start to question whether Dumbledore’s “plan” (and, by extension, Rowling’s writing) was just made up as they went along.

The characters are all sent off on their individual side quests, most of which ultimately contribute nothing to the outcome of the plot—this would have been fine had characters gone through anything meaningful or insightful on their journeys. Unfortunately, the characters still remain as thinly drawn as they have been since the first film.

Three movies deep and Scamander, the series’ main character, still only has the primary trait of “being into magical creatures” going for him. This third film pivots sharply to Albus Dumbledore and his relationship with his family and to Grindelwald, yet still feels underdeveloped. The film attempts to give Dumbledore a redemption arc (complete with a teary-eyed, regretful backstory monologue), but it also glosses over any internal turmoil the wizard had to deal with in order to ultimately claim said redemption. The conflict within the Dumbledore family seemingly resolves itself without a word by the film’s finale.

Even the Dumbledore and Grindelwald relationship, the most clearly defined one between any two characters in the series, boils down to a two-minute incomprehensible scuffle. The audience is supposed to feel the fiery passion these men have for each other, as once allies now enemies, yet their final confrontation is set against a washed-out grey background.

Due to the multitude of characters being focused on, the rest of the side characters don’t get their due as well. There's a scene towards the end where one character's victory is presented as the triumphant moment, the culmination the film had been building up to throughout—but falls flat because the character quite literally had no lines of dialogue in the entire film. Imagine that: the resolution of the film fell completely on a character the audience most likely had no investment in whatsoever.

The true crime of this middle chapter is that it doesn't further the prequel story as the Wizarding World is mostly in the same state as it was at the end of the previous film. There is barely any new dimension to the characters or the world that was added or delved deeper into in this go-around. More than stagnant, the film feels reductive to events of the previous movie, as it backpedals on the dramatic complications presented at the end of the last film in favor for a "all is right and peaceful, for now..." ending. All the good characters are on the right side and a typical good versus evil battle looks to be what follows in Fantastic Beasts 4, which feels like a de-escalation compared to where the last film left the characters.

Even at its most "fun," The Secrets of Dumbledore still isn't able to capture the inviting and whimsical energy of the Harry Potter films (even taking into account their darkest entries), instead trading it for a muddy and washed-out atmosphere, which may be a disappointment to most Potterheads. For those invested in the prequel's storyline, you may also walk away underwhelmed that this wasn't the epic showdown between Dumbledore and Grindelwald that has been built up to for nearly three whole films now.