The Thor: Love and Thunder Trailer Introduces Zeus, Gorr, and Female Thor
Loading
Already a member? Log in
No account yet? Create Account
Spot.ph is your one-stop urban lifestyle guide to the best of Manila. 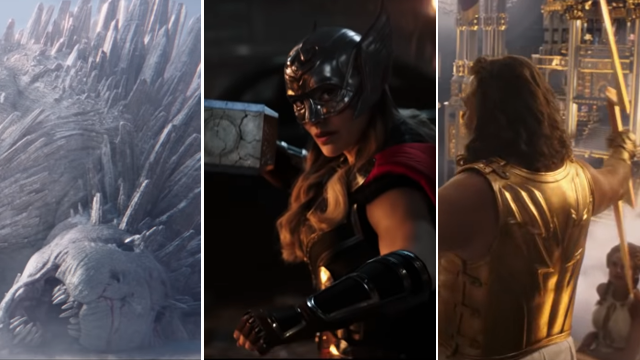 (SPOT.ph) With almost three months left until Thor: Love and Thunder drops in cinemas and almost no promos and marketing for the film in sight, many Marvel fans had been clamoring for a trailer to be released. Don’t be quick to tweet out, “Thor is officially retired” just yet, as the Marvel gods have answered our prayers and dropped the first teaser for the God of Thunder’s fourth film.

Released alongside the no-frills, we-know-you've-been-waiting-for-this caption “Here it is,” the Thor: Love and Thunder trailer comes in Guns N’ Roses-a-blazing, as it’s set to the tune of the band’s '80s hit Sweet Child O’ Mine. This '80s rock energy is no doubt the vibe that director Taika Waititi is going for. He similarly used Led Zeppelin’s “Immigrant Song” when pitching his vision for their previous outing, Thor: Ragnarok, and it worked so well that Marvel emphasized use of the song in the film’s marketing and during the film itself.

But with all the trailer’s emphasis on '80s rock, Thor’s (Chris Hemsworth) outer space travels, and the (As)Guardians of the Galaxy, you might be wondering who the film’s villain is and who the heck that girl worthy of wielding Mjolnir is.

While the trailer revisits familiar places in the Marvel Cinematic Universe such as the gladiator planet Sakaar (introduced in Ragnarok) and New Asgard (introduced in Avengers: Endgame), a noteworthy new location the film highlights is Olympus—yes, home of the gods of Greek mythology.

Just as the gods of Norse mythology are aliens from Asgard, the Greek gods exist as aliens in the MCU too and reside on the planet Olympus, which looks to be a rich, golden heaven, like Asgard was. Briefly teased in the trailer is the head of the Greek gods, Zeus, who’s played by the legendary Russell Crowe.

Similar to Thor, Zeus wields his signature lightning powers, but he’s not the film’s main antagonist. The film’s primary villain is actually Gorr the God Butcher, who’s portrayed by Christian Bale yet not shown in the trailer. Introduced fairly recently in Jason Aaron’s critically acclaimed 2012 Thor: God of Thunder series, Gorr is an alien from a dying planet who constantly prayed to the gods for them to save him and his family from starvation and disaster. The gods never answered his prayers, so he launched a vengeful quest to kill them all.

According to the film’s official plot synopsis, it’s Gorr’s quest that brings Thor out of his meditative journey and into the paths of other gods, such as Zeus. Another god briefly shown in the trailer is Falligar the Behemoth, whom Gorr has already slain, as the trailer depicts Thor and Korg looking over its giant corpse.

The film’s synopsis also confirms that Thor enlists the aid of Jane Foster (Natalie Portman) to fight Gorr, as she has now become worthy to wield Mjolnir. In the comics, Jane does become “the Mighty Thor” in the same Jason Aaron series, where she is diagnosed with cancer and becomes worthy to lift the hammer. The last we heard of Jane in the MCU was that she and Thor broke up in between Thor: The Dark World and Ragnarok, which definitely makes their encounter at the end of the teaser one hell of a awkward run-in with your ex.

What Has Thor Been Up to Since Avengers: Endgame?

Aside from all the plot details hidden in the trailer, the teaser does offer us a good look at what Thor has been doing since defeating Thanos at the end of Avengers: Endgame. That film ended with him passing on the throne of Asgard, leaving Earth, and joining up with the Guardians of the Galaxy.

The trailer picks up with Thor still with the Guardians, although he’s shown to be parting ways with them early on to head off on his own journey of self-discovery. Before the Guardians drop him off on Sakaar, Star-Lord (Chris Pratt) gives him some advice to look into the eyes of his loved ones whenever he feels lost. Thor plays it off for laughs, but it might be an especially biting comment for him, given he’s lost all his family, home, and superhero friends.

But if the short workout montage in the middle of the trailer is any indication, Thor will no doubt find the love—and the thunder—by the film’s end.

Thor: Love and Thunder drops in cinemas nationwide in July 2022.