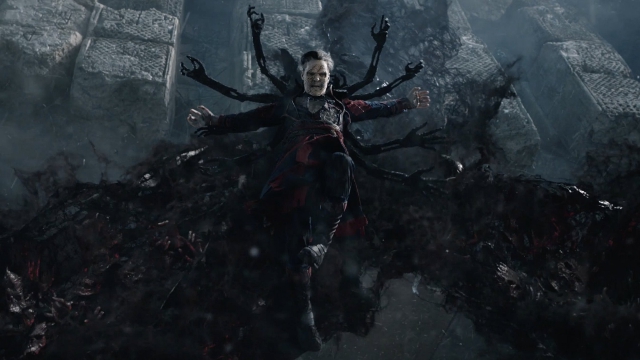 MOVIE REVIEW: Doctor Strange in the Multiverse of Madness Is a Twisted Venture Into Multiversal Mayhem

Does the Doctor Strange sequel live up to the hype?

(SPOT.ph) “There was no other way,” a defeated Doctor Strange (Benedict Cumberbatch) tells Tony Stark (Robert Downey Jr.) in Avengers: Infinity War after he surrenders the Time Stone to Thanos (Josh Brolin), who uses the stone to erase half the universe’s population—including Strange himself. The line is often repeated in Marvel Studios’ latest film Doctor Strange in the Multiverse of Madness, as Strange feels obligated to justify his universe-defining actions to the sidelined characters not caught up in super-heroism who just want to know: did it have to be that way?

Arrogance and hubris have always been a defining part of Stephen Strange’s character. In his debut film, it was depicted through his desire to have control over what couldn’t be controlled: his accident, time, and mortality. In the Master of the Mystic Arts’ long-overdue sequel, he is confronted with his great ego directly, as the infinite possibilities of the Multiverse lead him to encounter other Doctor Strange’s that aren’t necessarily heroic.

The defining question for audiences heading to see Doctor Strange in the Multiverse will be "Is it an adventure into the multiverse wherein they'll get to meet all sorts of crazy, fun, and recognizable Marvel characters? Or is it a grand introspection of the main characters, where the multiverse acts as a fractured mirror that'll allow the heroes to find out who they are?"

The answer, shockingly, is it’s neither. The film doesn’t exactly follow the formula of crowd-pleasers, such as Avengers: Endgame and Spider-Man: No Way Home, where the cruxes of the films were specifically designed around cheer-worthy moments of fan service. However, neither is the film some deep introspection of Doctor Strange, or even Scarlet Witch (Elizabeth Olsen), as, say, Iron Man 3 was for Tony Stark, or Avengers: Age of Ultron and Guardians of the Galaxy Vol. 2 were for their respective ensembles.

Multiverse of Madness is simply an action-adventure film with these mystical characters at the forefront. It’s elevated above the standard Hollywood fare, greatly due in part to director Sam Raimi’s very specific and idiosyncratic sensibilities. Yes, Raimi is particularly known for gruesome horror with a splash of some twisted dark comedy when you least expect it—and there’s definitely a lot of that in this film. From giant octopus monster’s eyeballs popping out of their socket to the Souls of the Damned cackling as they attack a zombified Stephen Strange, from jump scares to body disfiguration; this is definitely the most twisted Marvel outing yet.

However, beyond all the horror elements Raimi throws into the regular Marvel mix, the veteran director—who gave us the 2000’s Spider-Man trilogy—simply proves that these superhero films can and are inherently made to operate on a more visually engaging level. It’s incredibly refreshing to see a Marvel director use editing, blocking, and dynamic camerawork to convey thoughts and emotions. More than the screenplay, its the staging and the actors' expressive performances doing the heavy lifting for the audience to truly feel something on this grand journey.

The action sequences feel more alive because of intentional handheld coverage and jarring cuts to close-ups. Even the non-action, expository sequences have some kind of visual flair to them, so we’re not treated to yet another scene of characters standing around a room talking about the fate of the universe.

The biggest takeaway you’ll have by the film’s finale is that the Doctor Strange outing as a whole is definitely a Raimi vehicle, but with both Raimi’s and Marvel Studios’ hands on the wheel. There are sequences involving the wider canon of the MCU that Raimi clearly has less of an interest in, where his usual taste for bloody mayhem only gets to seep through the cracks (which, give or take, may dilute the sequence as a whole for some die-hard Marvel fans). On the other hand, when Raimi does get to unleash all his wicked sorcery—and you better believe he does by the film’s end—it’s still a bit tamer, compared to, say, the finale of his first Spider-Man film or the Doc Ock awakening sequence of Spider-Man 2.

It's an equal-parts marriage that allows the film to stand out on its own, stylistically, which will definitely reinforce rewatchability as we stare down the barrel of another decade’s worth of Marvel products. If nothing else, it proves that the Doctor Strange series is Marvel’s harbinger for a unique and instantly recognizable visual language that the audience will wholeheartedly embrace. Hopefully, we don’t need to wait another six years before getting a bigger, more horrifying sequel. But if we must, hopefully other Marvel properties follow in the master’s suit.

Doctor Strange in the Multiverse of Madness is now playing in cinemas.