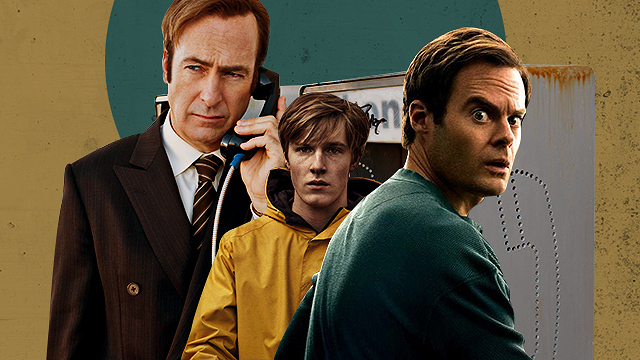 The Long-Commitment Crime Series Worth Binge-Streaming, Ranked By Running Time

From smooth criminals to sad cops to whole crime families.

(SPOT.ph) Our weekend streaming catalog isn’t looking as thrilling now that crime dramas Ozark and Peaky Blinders have wrapped up their final seasons. While there are dark and brooding crime movies we can watch, those would only keep us entertained for a night at most. We need the regular thrill of people committing illegal acts and still getting away with it—as if we aren’t already getting enough of that in real life.

So thank your lucky stars that there are a number of series currently streaming worth the binge-watch. While we’re not about to do anything illegal, that doesn’t mean we can’t have some vicarious fun. And to make things easier for you, we ranked them from shortest to longest running time—just so you know what you’re getting into (more or less).

Barry is a dark crime comedy series about a hitman (played by Bill Hader) who falls in love with the low-budget theater scene in Los Angeles, so much so that he decides to pursue a career as a stage actor, while also balancing his life as a hitman. If it sounds ridiculous, you’re absolutely right! Barry revels in the ridiculousness of its premise, while also delivering on hilarious bits of physical comedy, well-made action, and a layered exploration of someone who just hates a job he’s really good at. Now’s the time to definitely hop on a binge, as the series is nearly wrapping up its third season.

A German Netflix Original series, Dark kicks off with a missing-child case then spirals into an insane sci-fi mystery about inescapable time travel loops and multi-generational cultists. It makes for a truly fascinating and mind-bending binge-watch as it compels you to pay close attention and piece together the mysteries yourself. Simply put, Dark is an interesting exploration of human agency in the face of time. “The end is the beginning and the beginning is the end.” Try making sense of that, if you will.

From the mind of Nic Pizzolatto, True Detective is a crime anthology series, meaning that each season focuses on a different cast of detectives trying to unravel unrelated murder mysteries. The first season follows Matthew McConaughey and Woody Harrelson trying to solve a 17-year-long murder case in the murky marshlands of Louisana. The second season follows Colin Farrell, Rachel McAdams, and Taylor Kitsch as they try to uncover a corporate conspiracy in Los Angeles, while the third season focuses largely on Mahershala Ali trying to solve a missing children’s case in the Ozarks. The first season was widely acclaimed for its exploration of philosophical and religious themes, while the latter two seasons were less positively received. But trust us, the first season is so good, you’ll want to watch it again right away.

A prequel to the widely acclaimed crime drama Breaking Bad, Better Call Saul initially seems like a lighter series about the wacky antics of charismatic lawyer Saul Goodman (Bob Odenkirk). However, the show makes it very clear early on that it’s exploring all the tragedies and heartbreaks that caused struggling law practitioner Jimmy McGill to become the criminal lawyer Goodman. It’s one of the most compelling dramas, both narratively and visually, on Netflix at the moment and arguably should be in the conversation for one of the best series of all-time, just as much as Breaking Bad is. If you haven’t jumped on either show yet, now’s definitely the time, given that Saul is in the middle of its final season.

In contention for one of the greatest shows of all-time, The Wire is centered on the institutions in place in the city of Baltimore and how they all relate and work in tandem with the police. The series is a real, hard-hitting look into the urban life of the city and how people’s lives are affected by a myriad of social, economic, and political factors such as drugs, news, schooling and housing, among others. The series aired over the 2000’s and starred many actors well-known today, such as Idris Elba, Michael B. Jordan, Lance Reddick, Aidan Gillen, and Michael K. Williams. But the bottomline is, The Wire is a timeless classic worth checking out.

How to Get Away With Murder

From Shonda Rhimes (the creator of Grey’s Anatomy and Scandal), How to Get Away With Murder is another classic crime drama that ran throughout the 2010s. The series follows legal professor Annalise Keating (Viola Davis) who, along with a few of her students, gets involved in a murder mystery that is told over a non-linear story structure. The series has everything you’d expect out of a Shondaland show; spicy melodrama, intense sequences with character’s lives on the line, and a leading lady giving a phenomenal, over-the-top performance.

We have another one of the series in the mix for the greatest show of all-time: The Sopranos. You’ve undoubtedly heard about The Sopranos before. You’re also most likely already familiar with its premise of an Italian-American mafia family trying to maintain their criminal organization while also trying to keep the family from falling apart. It’s your classic set up that makes for great criminal television. It’s essentially The Godfather to all the serialized crime dramas you get to stream or watch on television—and we all know classics are classics for a reason.

The Blacklist is your classic police procedural that pairs a notably non-cop character with a by-the-books, rigid cop. This time, it’s the FBI’s Most Wanted Raymond Reddington (James Spader) paired with a rookie profiler (played by Megan Boone). Spader is fantastic with his dry wit as the criminal mastermind, which alone arguably makes the show worth the nine-season binge. It’s not a series you have to take incredibly seriously, as it does have wacky storylines including lost pirate gold and insect-based biological weapons, but that’s all part of the draw that keeps us coming back.