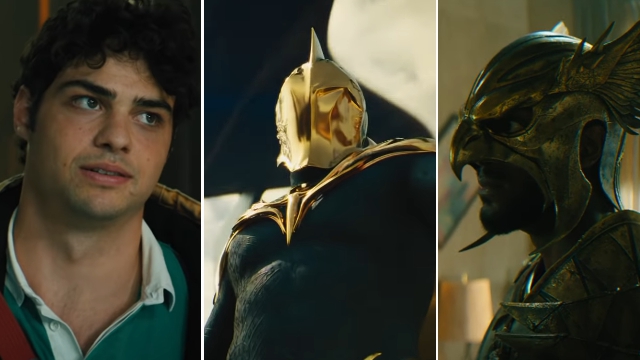 From Noah Centineo to Pierce Brosnan: Here’s the New “Justice League” the Rock Will Be Fighting in Black Adam

Smells like the Rock is going to cook them alive.

(SPOT.ph) After going straight to streaming over the height of the pandemic with releases such as Wonder Woman 1984, Zack Snyder’s Justice League, and The Suicide Squad, DC Films is gearing up to get back big-time into the cinema game. We saw Robert Pattinson dole out some nasty punches in the dark, three-hour-long, detective film The Batman earlier this year, and this will be followed up in a couple months with another standalone superhero film, starring none other than Dwayne “the Rock” Johnson himself.

A new trailer for Black Adam was just released giving us a glimpse at the origin story and sheer power of the DC Extended Universe’s latest anti-hero. It’s definitely not the character-centric drama that 2019’s Joker was. The Rock’s film looks to be an all-out action film. In the rush of all the chaos? You may have missed the new team of superheroes called the Justice League—er, Justice Society of America—that DC is introducing.

Also read: Villains We Want to See Robert Pattinson Beat Up in The Batman Sequel

Who Are the Justice Society of America in Black Adam?

“Heroes don’t kill people,” says the first member of the Justice Society of America that we’ll discuss: Hawkman, portrayed by Aldis Hodge. Before becoming the leader of the Justice Society, Carter Hall was an archaeologist who discovered that he was the latest reincarnation of the Egyptian prince Khufu, who encountered some rare alien metal back in ancient times. Now, in modern times, Hall uses the alien material for flight and to become the superhero Hawkman. Don’t worry, that’s as weird as it gets with these new superheroes… (not really).

Next up is a member that you may recognize, as he’s portrayed by the star of the To All the Boys… trilogy (and practically every big Netflix rom-com since 2018), Noah Centineo. Centineo plays the superhero Atom Smasher in Black Adam. His gist is that he can grow really big and punch things. A very handy set of powers to have on your team, as long as they don’t end up with Ezra Miller.

The newest character introduced to comics on this list is Cyclone, portrayed by Quintessa Swindell, who you may have seen in series like HBO’s Euphoria or Netflix’ Trinkets. In the comics, Cyclone is the granddaughter of one of the original Justice Society of America members, Red Tornado—a human, not the same one as the android that appears in the cartoon series Justice League or Young Justice. She controls the wind, so look forward to the Rock fighting the Wind, I guess.

Finally, we have Doctor Fate, portrayed by James Bond himself Pierce Brosnan. His alter ego, Kent Nelson was the son of an archaeologist who later came into possession of the Helmet of Fate. When Nelson puts on the helmet, he turns into Doctor Fate, who can wield godly magical powers, but at the cost of being somewhat possessed by/the avatar of a being known as Nabu, the Lord of Order. We did say it might get weirder. Anyway, to put it simply, he’ll play the wise sage-type, mentor figure of the team, who’ll also be the biggest threat to the Rock’s physical powers.

These characters are all getting their first live-action feature film adaptation in Black Adam, which will be their biggest test, as they’ll have to face off against the superpowered Rock. Hopefully, they get to stick around for a few more movies, just cause it’s cool to see the lesser-known DC characters finally brought to the big screen.

Black Adam drops in PH cinemas and IMAX on October 19.