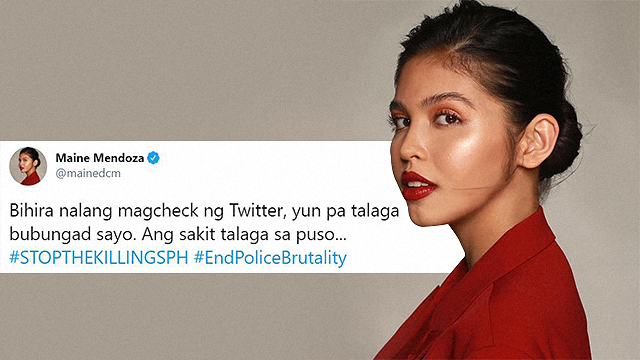 Several celebrities are condemning a shooting that occurred over the weekend.

(SPOT.ph) Twitter erupted into fiery calls to #StopTheKillingsPH, #JusticeforSonyaGregorio, and #EndPoliceBrutality on the morning of Monday, December 21—this, after a video of an off-duty policeman fatally shooting his two unarmed neighbors in Tarlac went viral online. The shocking incident has prompted several Pinoy celebrities to lead the condemnation and calls for justice, with Maine Mendoza leading the pack.

In the footage, Corporal Jonel Nuezca, 46, can be seen shooting Sonya Rufino, 52, and her son, Frank Anthony Rufino, 25, twice in broad daylight—and with Nuezca's daughter present. Nuezca has since surrendered and is now in police custody. Mendoza first tweeted her reaction to the incident at 7:30 a.m., emphasizing "BAKIT KAILANGANG UMABOT DOON?". She then called for justice for the two victims.

The actress followed up her tweet with a few more fiery ones: one in reaction to what appears to be the policeman's Facebook profile, and another expressing her dismay at having been greeted by the terrible news on Twitter, a platform she rarely goes on.

Mendoza isn't the only celebrity or online personality to have reacted to the shootings. With many online calling out the pattern of police brutality in the country, several pubic figures have joined the calls.

It seems Mendoza isn't the only one who was greeted by terrible news early in the morning. Maris Racal also pointed out that things may have gone down differently had there been no video proof of the killings.

Alessandra de Rossi called for justice for all those who have lost their lives "dahil lang sa init ng ulo ng ibang tao." Nuezca is reported to have confronted his neighbors after they set off firecrackers. She also discussed the child's situation, stating, "Bikitma din siya dahil mali ang alam niya."

Adventurer Savvy Government Maine Mendoza Maris Racal Macoy Dubs Ramon Bautista Staying In
Your Guide to Thriving in This Strange New World
Staying
In? What to watch, what to eat, and where to shop from home
OR
Heading
Out? What you need to know to stay safe when heading out