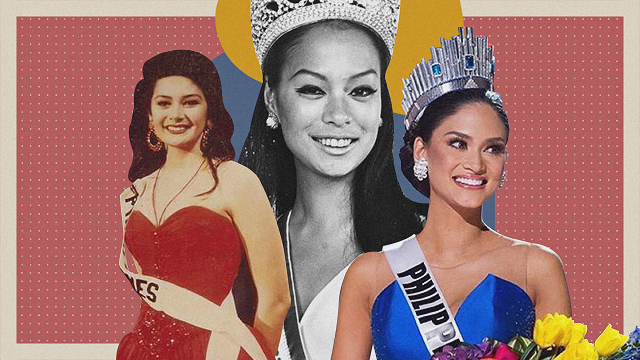 10 Times Our Miss Universe Queens Dropped the Most Memorable Answers

This is the true make-it-or-break-it moment.

(SPOT.ph) Forget long gowns and swimsuits, the most nerve-wracking part of Miss Universe is the question-and-answer portion. For pageant-crazy folks like Pinoys, the Q&A is what makes or breaks the whole experience—and solidifies the candidate’s chances of winning. Fortunately, our Filipina queens rarely disappoint. We take a look at some of the most memorable answers our candidates have given, whether borderline pilosopo or truly idealistic, check out the full spectrum. If you had the world’s attention for a few minutes, what would you say?

Take your cue from the 10 most unforgettable answers by Miss Universe Philippines candidates:

Question: "In the next day or so, a man will land on the moon. If a man from the moon landed in your hometown, what would you do to entertain him?”

Answer: "Oh, just the same things I do. I think if he has been in the moon for so long, I think when he comes over he wants to change, I guess."

The first-ever Filipino Miss Universe titleholder had one heck of an answer to a literally out-of-this-world question. Then just 18 years old, Gloria Diaz’s incredibly witty answer cemented her claim to the throne. And as for the man on the moon? Astronauts Neil Armstrong and Buzz Aldrin would do their historic moonwalk the very next day. News of Diaz’s win was even communicated to the Apollo 11 crew in space—and so were her measurements. Hey, this was 1969. We’ve taken giant leaps since then.

Question: "Let's make believe that all of a sudden you had a million dollars. What's the first thing you would buy and why would you buy it?"

Answer: "A house and lot, because it’s the most expensive thing and I can’t afford it. If I had a million bucks, I’d buy a house and lot and live by myself, and other people of course."

You know when they say a question is “pang-Miss Universe levels” you usually expect a super idealistic answer (read: world peace)—but Margie Moran gave us something better. She dished out a practical and incredibly relatable answer in a down-to-earth way that you just have to admire. A chance to buy your very own property? In this economy? Sign us up. And yup, even in the '70s, people knew just how hard it is to become landowners as they decided that  Moran should be the second Filipino to win the title of Miss Universe.

Question: "If you become Miss Universe of 1975, what one individual other than your parents would have made the greatest contribution to your success and why?"

Answer: "Well, I think it would be the judges, because they were the ones who voted for me if I won Miss Universe."

There’s nothing better than a cheeky answer. We don’t know if there was something with our candidates pre-2000s but the best answers from those years all had an incredibly witty edge on them. Chiqui Brosas' tongue-in-cheek answer combined with that joyous smile is hard to beat—and landed her the spot of fourth runner-up, too.

Question: "How many islands are in the Philippines?"

Charlene Gonzalez's witty response elicited cheers from the home crowd when the Miss Universe pageant was held in Manila in 1994. Gonzalez later shared that she made the tide remark as a way to buy some time while she tried to remember the actual number. Smart. She eventually became part of the Top 6 finalists—and her speedy reply is now a major, major part of Philippine pop culture. BTW, the latest count is at 7,641 islands, bar the tides. You’ll have to ask Gonzalez for that exact number.

Question: "One of your proudest achievements was standing up to one of your professors back in college. Now, what have you stood up for recently?"

Answer: "When I fell on the stage last Friday. I believe that I had stood up for all the women who had fallen whether on- or off-stage. I believe that through this example of mine, I have shown courage and strength of being a woman, of being who I am. And I hope to be a good example to the rest of the women in the world.”

Miriam Quiambao took the “when life gives you lemons, make lemonade” saying to a whole new level with this answer. Quiambao tripped on stage during the Miss Universe preliminaries but she picked herself right back up and even managed to use the incident to her advantage. Best part? She landed first runner-up, the first Filipino to do so.

Question: "What is one big mistake that you made in your life and what did you do to make it right?"

Answer: "In my 22 years of existence, there is nothing major, major problem that I have done in my life, because I am very confident with my family, with the love that they are giving to me. So thank you so much that I'm here. Thank you, thank you so much!"

Come on, guys. No one has the right answer to this way too personal question (especially on such a global stage). Venus Raj was clearly on the path to the Miss Universe crown—until this question had her fumbling. She ended up with the title of fourth runner-up after that Q&A but we all know she’ll always hold meme royalty status thanks to “Major Major.”

Question: "As an international ambassador, do you believe that speaking English should be a prerequisite to being Miss Universe? Why or why not?"

Answer: "For me, being Miss Universe is not just about knowing how to speak a specific language, it's being able to influence and inspire other people. So whatever language you have, as long as your heart is deserving and you have a strong mind to show to people, then you can be Miss Universe."

Tugonon lit up the stage with her clear delivery and worthy message. She landed the spot of first runner-up, the second Filipino to do so. Her win also marked the third consecutive time Filipino candidates made it to the Top 5, with Venus Raj as fourth runner up in 2010 and Shamcey Supsup as third runner-up in 2011.

Question: "What can be done about the lack of jobs for people starting their careers around the world?"

Answer: "For the people who have lack of jobs, I do believe that we, people, should invest in education and that is my primary advocacy. Because we all know that if every one of us is educated and well aware of what we are doing, we could land into jobs and good careers in the future. Education is a primary source and it’s a ticket for a better future."

Ariella Arida’s fight for the Miss Universe crown lit up huge debates on the importance of language in the pageant fanbase. A lot of folks were saying that she should have used the help of a translator but it’s clear Arida went on stage prepared. She continued our Top 5 streak by winning third runner-up.

Question: "Why should you be the next Miss Universe?"

Answer: "To be a Miss Universe is both an honor and a responsibility. If I were to be Miss Universe, I will use my voice to influence the youth, and I would raise awareness to certain causes like HIV awareness, that is timely and relevant to my country, which is the Philippines. I want to show the world—the universe, rather—that I am confidently beautiful with a heart."

The 2015 Miss Universe is arguably one of the most memorable thanks to host Steve Harvey’s mistaken proclamation of the titleholder. Fumbles aside, it was clear Pia Wurtzbach was the only choice for Miss Universe after this answer and her delivery. Her on-the-spot line, “confidently beautiful with a heart” is sure to go down the annals of pageant history.

Question: "If you were going to write a song about your experience here in Miss Universe, what would you call it?"

Answer: "Well, you know what, Steve, as Miss Philippines, I've always felt the love and support of the Filipino people, and I think I brought half of my country here tonight and so I would name my song, 'Raise Your Flag,' because I stand here not as one, but as 104 million FIlipinos!"

Chills. Every answer Catriona Gray had in the 2018 edition was perfection but her first one, done after she made it to the Top 20, just has to be the best. Don’t lie, you’ve tried to say 104 “mil-yun” Filipinos the way she did—complete with that head shake.

Adventurer Savvy Seasoned Miss Universe Nostalgia Gloria Diaz Margie Moran Chiqui Brosas Charlene Gonzales Miriam Quiambao Janine Tugonan Pia Wurtzbach Catriona Gray Venus Raj Ariella Arida
Your Guide to Thriving in This Strange New World
Staying
In? What to watch, what to eat, and where to shop from home
OR
Heading
Out? What you need to know to stay safe when heading out