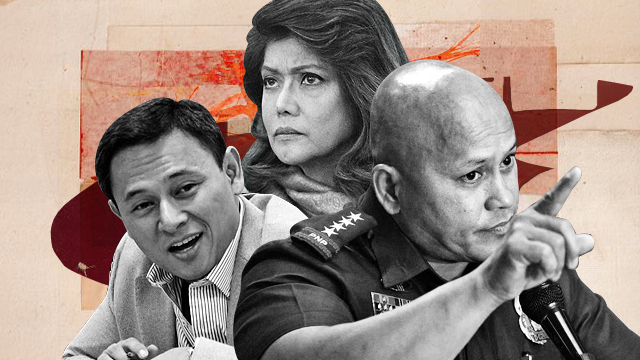 Are we living in a nightmare or what?

(SPOT.ph) National campaigns in the Philippines are often compared to a circus—you have candidates singing and dancing, falsifying their records, getting in and out of jail, and coming up with all sorts of gimmicks. The 90-day campaign period for the national elections on May 13 is no different. It is the time, after all, when aspirants try their best to make people vote for them.

Here are 10 statements from senatorial bets that would definitely make us remember them—but not necessarily in a good way:

"[...] What they're saying about admission of guilt, that's difficult, because I was of minor age [...]" —Imee Marcos on liability

In an interview on January 22 with dzBB's Mike Enriquez, the senatorial candidate asked "for forgiveness from everyone who was hurt by the unexpected events, those who were maltreated, who were hurt in any way, really, everything, we say sorry to them." She was referring to the Martial Law period, which was described as one of the darkest chapters in Philippine history. But, according to her, she cannot admit guilt as "[she] was of minor age, [she] was not a government official." She had the same position in November 2016, "Iyong admission of guilt, unang-una, ang liit-liit ko noon. Paano ko ia-admit, hindi ko naman alam?" When Ferdinand Marcos declared Martial Law on September 23, 1972, Imee was about to turn 17 years old. (The younger Marcos was born on November 12, 1955.) The Marcos regime continued until February 1986, when the family was exiled to Hawaii after the People Power Revolution. By then, she was 31 years old. In other news: Lawmakers in the Philippines are pushing to lower criminal liability to the age of 9 or 12.

"I am not lying, you are just ignorant," "Don’t argue with me. Argue with the organizers. Bobo e," and "Don’t waste my time. I am more important than you." —Larry Gadon after a University of San Carlos student called him a liar

Larry Gadon's "bobo" remark on March 18 at the University of San Carlos wasn't the first time this senatorial candidate was embroiled in controversy. In April 2018, he was caught on camera flashing the middle finger at and cursing at supporters of Chief Justice Maria Lourdes Sereno at the Supreme Court summer court house in Baguio City. "Mga bobo," he shouted, and added "Ikaw bobo, p*tang ina mo ka, k*ng ina mo ka" repeatedly. A year later, he lashed out at an audience member who called him a liar. This was after Gadon defended the Marcoses and said that they did not accumulate ill-gotten wealth. He cited all the infrastructure projects during their regime, omitting the fact that this eventually resulted in economic recession.

Hugpong ng Pagbabago's campaign caravan often features song and dance numbers by local performers including Andrew E, the Sexbomb dancers, and Enzo Pineda. Even the senatorial candidates sing a few songs themselves. Ronald "Bato" dela Rosa, who is one of the senatorial bets of Hugpong, defended this style of campaigning by saying that voters are just looking for entertainment—not for their platforms—during sorties.

In one of his showbiz-worthy campaign sorties, senatorial candidate Bong Go and actor Philip Salvador worked out a skit to make the audience laugh. The spiel played around with the idea of Salvador being an "adopted father of Davao" for fathering four children in the country's durian capital. "Totoo naman e. Naloko mo nga si Kris Aquino e," Go said. Actress Kris Aquino cried foul over the "joke" and posted on Instagram: "I have only had good words for you pero sana sa paglilingkod niyo para sa mga Pilipino bilang senador (I know you are a sure winner), sana priority n'yo rin po ang mga kababaihan." "Joke lang po namin yun ni Ipe," Go said in a public apology.

In August 2013, then-senator Bong Revilla was alleged to be one of the patrons of dubious non-government organizations linked to Janet Lim Napoles. He saw himself behind bars in June 2014, sharing a four-room bungalow in Camp Crame with the two other accused public officials, Juan Ponce Enrile and Jinggoy Estrada. Meanwhile, jails across the country—which have a total capacity of 20,653—have a total population of 146,302 inmates. His lament “Para kang buhay na tinatalupan” was delivered in a campaign speech in February. Revilla was acquitted in December 2018.

Like Revilla, Jinggoy Estrada also denies allegations of his involvement in one of the biggest pork barrel scams in the country. He's been out on bail since September 2017. The plunder case against him (and Revilla) started with the alleged amassing of P183.793 million worth of kickbacks for allocating his Priority Development Assistance Fund to bogus non-government organizations. Hugpong ng Pagbabago campaign manager Sara Duterte-Carpio claimed that members of the Hugpong slate were unlikely to be corrupt, saying, "Wala naman sa kanila ang convicted of plunder and other corruption laws."

"I can campaign with Imee because she has been nominated by the President." —Koko Pimentel on being against the older Marcos, but being friends with the younger Marcos

Former Senator Nene Pimentel, father of Koko Pimentel, is one of the staunch critics of Marcos' dictatorship and Martial Law regime. The older Pimentel was even a political prisoner. Despite this, the younger Pimentel chose to campaign side by side with Imee Marcos under the Hugpong ng Pagbabago banner. He clarified, however: "If you ask me about the Marcos martial law years and if you ask me if these were good years or beneficial years for the country, I would still say no because of the suppression of democracy, we had no basic freedom. That’s still going to be my stand when you ask me my opinion about the Marcos martial law years."

"Now, because of that handling, someone got angry and ordered an investigation, does it really translate to an attack on press freedom? How come in other networks, it’s not like that?" —Jiggy Manicad on his belief that press freedom is not under attack

Jiggy Manicad, a former journalist for GMA, said in an interview in January that Rappler's case is isolated and not part of a government attack on press freedom. Meanwhile, Freedom for Media, Freedom for All Network has 99 documented cases of assault against the media during the first two years of the Duterte administration. On ABS-CBN's Harapan 2019 debate, Manicad said that libel should remain a criminal act, but on ANC's Headstart more than a week later, he said that he "may reconsider [his] position.”

Metro Manila was hit with a massive water shortage starting on March 7. Residents had to line up for rationed water, buildings had to close down restrooms, and even the National Kidney Transplant Institute had to regulate its services. Given all that, guess it's easy to joke about something so real when you're so out of touch.