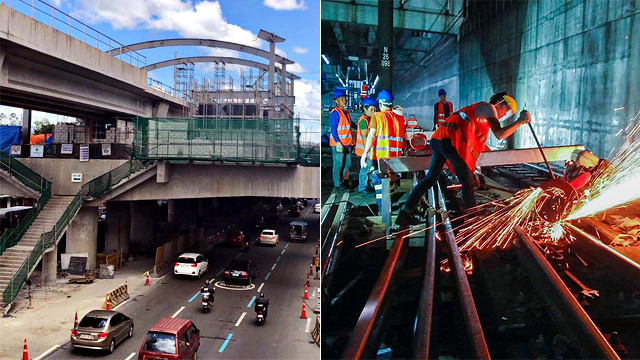 The Metro’s Train Lines Are Getting the Upgrade We Deserve

Check out all the planned extensions and repairs!

(SPOT.ph) If there’s one good thing that has come out of being a Metro Manila public-transport commuter, it’s the ability to find a way, no matter the circumstance. You can throw us in the middle of an urban jungle and we’ll make it out just fine, thank you very much. Now while we appreciate all the tough life lessons the Metro has given us, we can’t help but be excited for all the good things coming our way to make our trips easier—finally.

Here are the Metro Manila LRT and MRT extensions and rehabilitation projects commuters can look forward to:

Cavite folks, rejoice! The LRT-1 Is being extended all the way to Bacoor, Cavite, with approximately 11.7 kilometers worth of tracks to be added from the current terminal station of Baclaran. The entire extension has a 2022 deadline, but we might just get a little sample before then. Seven kilometers worth of track, from the Redemptorist Church in Baclaran to Dr. Santos Avenue in Parañaque, will ideally be available for partial operability by the end of 2021, according to Juan Alfonso, the Light Rail Manila Corporation president.

The new section will have a total of eight stations. Check out the official list below:

Once complete, the entire LRT-1 will span a distance of 32.4 kilometers. Daily ridership is expected to go up to 800,000 from the current 500,000; with the added passengers, the Department of Transportation has ordered four light rail vehicles to be delivered by the Mitsubishi Corporation in July 2020, according to a report by BusinessWorld. Travel time from Baclaran to Bacoor will be cut down to (drumroll, please) the magic number of 25 minutes. That’s got to be at least a couple hours shorter than the current time it takes.

While LRT-2 passengers from the east have been suffering since October 2019—the end station of Santolan and the following Katipunan one are out due to a fire—2020 promises to bring two whole new stations. The east extension, which will add the Emerald Station in Marikina and the Masinag Station at the Masinag Junction in Antipolo, is set to be completed by the end of this year; a very precious promise considering it’s been planned since 2011.

The four-kilometer extension is seen to add 80,000 passengers to the current 240,000 passengers the LRT-2 carries daily. And once finished, travel time from Antipolo, Rizal to Recto, Manila will be cut down from god-knows-how-many hours to a mere 40 minutes. The U.S. $62 million extension is being handled by a consortium of Marubeni Corporation and DM Consunji, Inc.

As of April 2019, the extension to Masinag was already 60% complete, according to a report by the Manila Bulletin. Naoto Tago, President and CEO of Marubeni Philippines Corporation, has pledged to get the tracks working by the last quarter of 2020. Since the project finally broke ground in 2017, riders have been promised a 2018 deadline, then a 2019 one, and now, a 2020 one. As they say, third time’s the charm!

Over on the other end of the LRT-2’s current 13.8-kilometer stretch, another extension is underway. Three stations will be added past the Recto terminal station, stretching all the way to the Manila Bay pier. First is the Tutuban Station, then Divisoria (which hopefully means there will be no need to ride a jeep from Recto Station to get to the shopping hub), and finally the Pier 4 station at the western edge of the Metro. As of October 2019, the Light Rail Transit Authority had not yet started with the public bidding for contractors, but the extension is scheduled for a 2023 deadline.

The western extension to the LRT-2 will add 16,000 more passengers to its daily ridership. Travel time from Recto Station to the planned Pier 4 station should take around five minutes, according to a report by ABS-CBN, which means that moving from one end of the LRT-2 line to the other should take less than an hour. It might be hard to imagine going from the Metro’s eastern edge at Antipolo all the way to the western edge of Manila in under 60 minutes—it’s practically light speed, relatively speaking—but fingers crossed it comes true!

Our most um, challenging train line is also getting some well-deserved attention. The line traversing EDSA is undergoing a long-overdue rehabilitation, with two main goals to realize by July 2021: first, raise the average number of available trains during peak hours from 15 to 20, and second, double the average speed from 30 kilometers per hour to 60 kilometers per hour. Ideally, this means waiting time between trains will be cut short to just three-and-a-half minutes—we can finally say goodbye to spending practically half our commute time waiting in line.

Aside from the major goals, we’ve also got a few comforts to look forward to. The trains’ air-conditioning units are now being replaced, with a total of 96 units already installed, and 24 more to come. Plus, the entire stretch of tracks are set to be replaced with new railings. The rails on the south side from Taft to Buendia have mostly been replaced as of writing, which means a smoother, faster ride is coming.

Trains are arguably the best option for mass transit—you can transport more people at much faster speeds compared to cars, buses, or PUVs—and for the Metro’s long-suffering commuters, these advancements are way overdue. At this point, we’re all used to waiting, but here’s hoping the smog lifts soon.