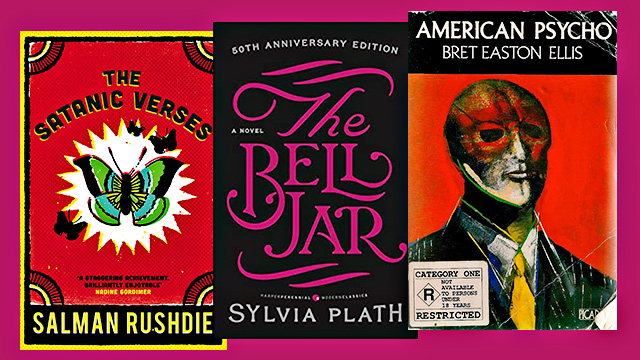 10 of the Most Controversial Books of All Time

Did you know a Stephen King book was once linked to school shootings?

(SPOT.ph) There’s nothing more entertaining—er, interesting than a scandal. And trust us, the literary world has way more than its fair share. Books, novels, essays—the written text in general—were once the most common way by which ideas were shared among people, and as it always goes with ideas, some were met with extremely raised eyebrows (to say the least.) Take for example history’s greatest controversial texts: the Bible, Galileo Galilei’s essays, Charles Darwin’s On the Origin of Species, Karl Marx’s The Communist Manifesto, Jose Rizal’s Noli Me Tangere and El Filibusterismo; the list goes on. The grand concepts and ideas of these texts have evolved through time, and of course, much debate and discussion, to become far more than just words on paper.

While the digital world has given us more than enough in the way of controversial ideas and statements, the last century of books has certainly not disappointed, either. We round up just a few of the most controversial texts from the past few decades—ones that shocked enough to be banned. Why not add these to your reading list to see just how much ideas have changed?

Add these controversial reads to the list of books to read before you die:

"I had all the characteristics of a human being—flesh, blood, skin, hair—but my depersonalization was so intense, had gone so deep, that my normal ability to feel compassion had been eradicated, the victim of a slow, purposeful erasure. I was simply imitating reality, a rough resemblance of a human being, with only a dim corner of my mind functioning." —excerpt from American Psycho

If, for some godforsaken reason, you enjoyed the movie, then why not give the book it was based on a chance? American Psycho offers no comforting scenes, just brutal depictions of sadism, narcissism, and extreme violence—mostly against women. When it first came out, it was called “the most loathsome offering of the season” by Roger Rosenblatt of the The New York Times with boycotts and death threats all around for Ellis and the publishers. But over the years, the work has gained a reputation as—you guessed it—satire, drawing praise as a critique of commercialism. American Psycho has been carved into popular consciousness, with Patrick Bateman (and his ax) as the perfect example of the modern antihero.

The Satanic Verses by Salman Rushdie (1988)

"So India’s problem turns out to be the world’s problem. What happened in India has happened in God’s name. The problem’s name is God." —excerpt from The Satanic Verses

You know you did something wrong when a country’s religious leader calls for your head—which is exactly what happened to Rushdie after the publication of his novel. Iranian leader, Ayatollah Ruhollah Khomeini ordered a fatwa—a type of non-binding legal directive—calling for devout Muslims to kill Rushdie and his publishers thanks to The Satanic Verses, a magical realism work inspired in part by the life of Muhammad. The book was immediately banned in several Muslim countries for its alleged offensive depictions of the Islamic founder and other aspects of the religion. Many cultural and religious tensions of today can be traced back to Rushdie’s novel.

"When you're five and you hurt, you make a big noise in the world. At ten you whimper. But by the time you make fifteen you begin to eat the poisoned apples that grow on your own inner tree of pain." —excerpt from Rage

Stephen King has created a wonderful world of terror though his books, but this one just proved to be too much. King had originally written the story of Charlie, a troubled student who shoots up his high school and takes his classmates as hostage, when the author himself was still studying. It was first published under his pen name Richard Bachman. In the following years, several school shootouts in the U.S. were found to have some link to the book—some perpetrators were explicitly trying to follow the book's events while a copy was found among the possessions of others—and King eventually had it pulled out of print entirely. “I pulled it because in my judgment it might be hurting people, and that made it the responsible thing to do,” King wrote.

The Anarchist Cookbook by William Powell (1971)

"I believe that the people in power—not only political power, but also economic and social power—will not non-violently give up that power to the people. Power is not a material possession that can be given, it is the power to act. Power must be taken, it is never given." —excerpt from The Anarchist Cookbook

This book contains instructions on how to make explosives, LSD, teargas, and more, as well as detailing how to operate firearms and destroy infrastructure—a terrorism how-to, if you will. It was written by New York local William Powell as a counter-cultural text at the time when he was being drafted into the U.S. Army during the Vietnam War. The reason for controversy is clear. Powell himself has turned over a new leaf since he wrote it. “I have come to understand that the basic premise behind the Cookbook is profoundly flawed. The anger that motivated the writing of the Cookbook blinded me to the illogical notion that violence can be used to prevent violence,” he wrote in an essay for The Guardian in 2013.

"But when it came right down to it, the skin of my wrist looked so white and defenseless that I couldn't do it. It was as if what I wanted to kill wasn't in that skin or the thin blue pulse that jumped under my thumb, but somewhere else, deeper, more secret, and a whole lot harder to get." —excerpt from The Bell Jar

The only novel ever written by poet Sylvia Plath is considered by many to be semi-autobiographical. It follows Esther Greenwood as she lives a seemingly posh and normal life—yet is plagued by depression and other mental-health issues. Plath committed suicide the year her novel was published. The book spent the next few decades on and off the list of banned books in the U.S. due to its descriptions of self-harm and suicide in a society that still could not fully accept the reality of mental illnesses. Now, The Bell Jar is considered a classic and its story rings true today.

"Lolita, light of my life, fire of my loins. My sin, my soul. Lo-lee-ta: the tip of the tongue taking a trip of three steps down the palate to tap, at three, on the teeth. Lo. Lee. Ta. She was Lo, plain Lo, in the morning, standing four feet ten in one sock. She was Lola in slacks. She was Dolly at school. She was Dolores on the dotted line. But in my arms she was always Lolita." —excerpt from Lolita

If the excerpt above elicited some sort of feel-good butterflies in your stomach, you probably weren't aware this is a middle-aged man talking about a prepubescent child—which is exactly the problem of Lolita. Nabokov’s master prose masks the frighteningly disturbing reality of this novel with such elegance and beauty that you almost feel moved for Humbert Humbert. The book was banned in France, England, Argentina, and New Zealand in the latter half of the 20th century but the ideas and imagery of Lolita have gone down in popular culture (read: Lana del Rey).

"I'm the most terrific liar you ever saw in your life. It's awful. If I'm on my way to the store to buy a magazine, even, and somebody asks me where I'm going, I'm liable to say I'm going to the opera. It's terrible." —excerpt from The Catcher in the Rye

We all know what it’s like to be an angst-filled teenager, and a few reads of this American classic featuring Holden Caulfield’s misadventures always helped fuel that inner fire. So why has it been banned several times by schools and libraries in the U.S. throughout the 20th century? Well it looks like Caulfield’s brash language and frankly twisted observations were too much for the public eye—mix in his constant (underage) drinking and his attempt at hiring a prostitute and you’ve got a text that was simply unacceptable, never mind that it portrayed very real sentiments about post-war disillusionment.

"No one is more arrogant toward women, more aggressive or scornful, than the man who is anxious about his virility." —excerpt from The Second Sex

Unsurprisingly, the book often said to have ignited the second wave of feminism is a controversial one. Written by the philosopher Beauvoir in a span of three years, the text tackles the treatment of women throughout history. The book ignited several discussions on whether it was saying anything new, was accused of bearing a “male” notion of equality, and as of 2014, was a title under the list of books banned by the Vatican.

"This is not a book, in the ordinary sense of the word. No, this is a prolonged insult, a gob of spit in the face of Art, a kick in the pants to God, Man, Destiny, Time, Love, Beauty … what you will. I am going to sing for you, a little off key, perhaps, but I will sing..." —excerpt from Tropic of Cancer

The excerpt above is found in the first few pages of this Miller novel—and perfectly sets the tone for the entire story. The novel follows the train of thought of an American writer living in Paris in the 1930s. He chooses to be poor in order to live life to the fullest (i.e. sleeping with prostitutes, scrounging for his next meal, and maybe, maybe, actually writing). While it may be a bit hard to make any logical sense of the rambling, the lewd scenes, frank descriptions, and very free language was enough for it to be banned by the U.S. government—including all future Miller works—in 1938. It wasn’t until 1964 that their Supreme Court officially removed the label of “obscene,” and people were allowed to enjoy the text legally.

"She lay quite still, in a sort of sleep, in a sort of dream. Then she quivered as she felt his hand groping softly, yet with queer thwarted clumsiness, among her clothing. Yet the hand knew, too, how to unclothe her where it wanted." —excerpt from Lady Chatterley's Lover

Who needs porn when you can read Lady Chatterley’s Lover? Lawrence’s book tells the tale of an upper-class woman whose husband, disabled from the war, allows her to pursue an affair with another man—who happens to be their gamekeeper. The book became notorious not just for its, uh, titillating descriptions of sex, but also for the love affair between two people from different classes, and yup, its use of coarse language. A watershed trial in the 1960s U.K. declared the novel not obscene—and cemented the prosecution’s then already out-of-touch moral code when counsel Mervyn Griffith-Jones asked the jury whether it was “a book that you would even wish your wife or your servants to read.”