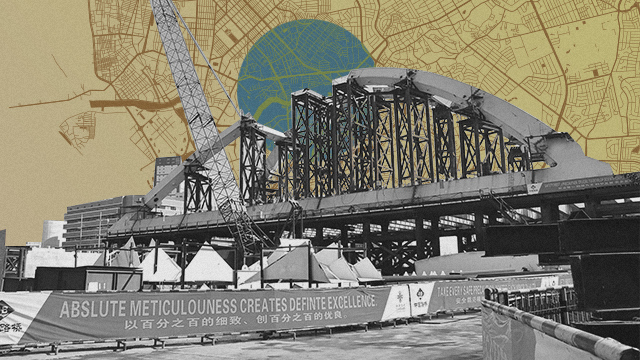 Secretary Mark Villar talks about how this could help unclog EDSA.

(SPOT.ph) Motorists have been waiting a long time for routes aside from EDSA—besides being one of the most accident-prone thoroughfares in Metro Manila, it's also a constant venue for "carmageddon". In 2021, three major links over Pasig River are slated to finish construction and Mark Villar of the Department of Public Works and Highways has pointed to these projects as a way to decongest Metro Manila's main artery. Check out the official plans for the BGC-Ortigas Center Road Link, the Estrella-Pantaleon Bridge, the Binondo-Intramuros Bridge, and beyond below.

The three upcoming bridges are a part of the overall Metro Manila Logistics Network. A total of 11 bridges over Pasig River, Marikina River, and the Manggahan Floodway are being eyed for the project.

Target date: Partial opening in May 2021.

This project will connect Bonifacio Global City and Ortigas Center, two main business districts in Metro Manila. The four-lane bridge will cross over Pasig River from Lawton Avenue in Makati City to Monica Street in Pasig City. Travel time between the two business districts will ideally be cut down to just 12 minutes, according to the Department of Public Works and Highways (DPWH).

Remember the old two-lane Rockwell bridge that was closed up in 2019? The bridge will be revamped into a four-lane concrete and steel structure connecting Estrella Street in Makati City and Barangka Drive in Mandaluyong City. The expansion will allow an additional 9,438 vehicles daily, said the DPWH.

The previous steel structure was not meant to be a permanent one, explained Villar in a roundtable with Summit Media press. The new China-funded Estrella-Pantaleon bridge is meant to replace the old structure.

The much-talked about China-funded bridge in Manila is slated to finish this year as well. It is situated near the older Roxas Jr. and Jones Bridge, connecting Intramuros (Solana Street and Riverside Drive) and Binondo (San Fernando). The DPWH expects around 29,992 vehicles that usually use the older two bridges to transfer to the newer one once complete.

The so-called "Friendship" Bridge became controversial due to its proximity to the historical San Agustin  Church. The new construction's short distance from the centuries-old structure meant that the church was in danger of losing its status as one of the country's four Baroque churches listed in the the United Nations Educational, Scientific and Cultural Organization's World Heritage Sites.

Aside from the three bridges already in construction, six more are currently in different development stages: the North and South Harbor Bridge, the East Bank-West Bank Bridge 2, the Palanca–Villegas Bridge, the Marikina Vista Real Bridge, the JP Rizal–St. Mary Bridge, and the JP Rizal–Lopez Jaena Bridge.

How Will These Metro Manila Bridges Help Decongest EDSA?

The decongestion of EDSA is arguably one of the DPWH's current goals. Villar states that when he came in as department chief, the stats on EDSA were that around 410,000 vehicles used the thoroughfare daily—as opposed to the actual capacity of just 280,000.

Now, the bridges and the two main north and south connectors—the Skyway Stage 3 and the Harbor Link—will ideally serve as alternate routes motorists can use aside from EDSA. "Of course, some of these projects existed before but these were the projects that we decided to push [because] we feel they were necessay for the decongestion of EDSA," says Villar.

With the BGC-Ortigas link, "our projection is about 30,000 cars per day," while over at the Estrella-Pantaleon Bridge, "we're looking at 20 to 25,000 cars per day," says Villar about the number of motorists that they expect will use the upcoming bridges. "This is a major bottleneck in the Guadalupe section," added the secretary, referring to the single Pasig bridge in the area where the two new links will open: the Guadalupe bridge along EDSA that we've been using for decades now.

The opening of the Skyway Stage 3 gave the DPWH some very optimistic stats, as well. Around 70,000 cars use the newly opened Skyway, said Villar, and the average speed along EDSA bumped up from around 16 kilometers per hour to 28 kilometers per hour. "And that's without the bridges crossing Pasig, without the [north and south] connector," he pointed out.

Once all the bridges and links are up, Villar expects that "the end result is that EDSA will go back to its original capacity."

Adventurer Savvy Seasoned City Life Mark Villar Department Of Public Works And Highways Dpwh Infrastructure Estrella-pantaleon Bgc-ortigas Link Binondo-intramuros Hard News
Your Guide to Thriving in This Strange New World
Staying
In? What to watch, what to eat, and where to shop from home
OR
Heading
Out? What you need to know to stay safe when heading out