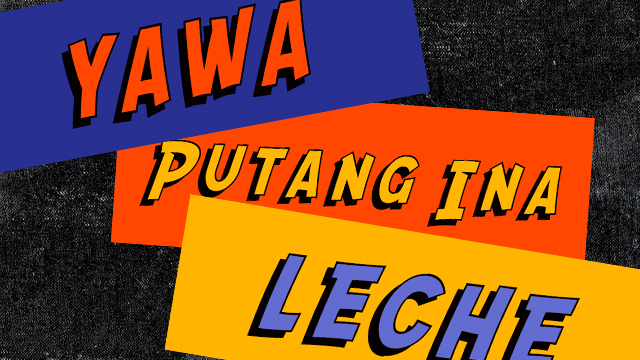 ...and what our other popular swear words really mean.

(SPOT.ph) Turn on the television on Monday nights and you get a free masterclass on Filipino profanity, from "yawa" that's commonly used by Visayans to the more common "putang ina." In case you're wondering where these curse words came from, we rounded up some of the most-used profanities in the Philippines and did a little research on their origins.

Also read: 10 Long-Lost Filipino Words That Deserve to Be Said Every Day

Here are some of the commonly used Filipino bad words and what they really mean:

In English, there's "bitch" or "son of a bitch," "pussy," or "twat." In Spanish-speaking countries, curse words are taken further by demeaning mothers. There's "hijo de puta," "tu puta madre me la chupa," and "jode su madre." In a document called Profanity, Obscenity and Abuse, author Michael A. Estrada presumes that the insults are directed to the mother "because no one likes their mom to be insulted." The Philippines, being a Spanish colony for three centuries, has also inherited this through the Tagalog curse phrase "putang ina," which is short for "puta ang ina" (your mother is a whore).

In a 2015 BBC article by James Harbeck titled "Mind your language! Swearing around the world," he posits that "transgressive language in many cultures involves sexual acts on a person’s mother." This is because sex, in its worst form, is seen as a form of dominance—often a male over a female; in the same way that cursing involves asserting power. Cultures that use mother figures as the go-to bad language, according to the article, also tend to have extended families. It just stings a little bit more when a relative, most especially your innocent mother, is brought in a bad light. Then there's the whole other issue that sex work or prostitution is often antagonized in many societies.

On top of demeaning women and mothers, another influence of Spanish colonization is demonizing our indigenous beliefs. “Yawa” is used as a curse word since its English translation, according to UP Diksiyonaryong Filipino, is "demon."

Yawa, however, comes from Malitong Yawa, a female character in the Panay epic poem Hinilawod that follows the hero Humadapnon. According to Edgar Calabia Samar's book 101 Kagila-gilalas na Nilalang, Humadapnon gets introduced to Malitong Yawa Sinagmaling Diwata through a dream and it becomes his mission to look for the beautiful and powerful daughter of Buyong Labaw Donggon and Uwa Matan-ayon. During a tumultuous journey, Malitong Yawa saves Humadapnon from the perils of the sea and they eventually get married. But a man named Amurutha tries to get his hands on the bride, and so Humadapnon battles with him and it lasts for seven years. Launsina, goddess of the heavens, intervenes and reveals that the two warriors are actually brothers. She divides Malitong Yawa into two, who become the respective brides of Amurutha and Humadapnon.

Demonizing Malitong Yawa or Yawa was part of the colonizers' move to convert Filipinos into Christianity by getting rid of their indigenous mythologies. Eventually, “yawa” became part of our colorful curse lexicon.

The UP Diksiyonaryong Filipino defines “gago” or “gaga” as someone who stutters (“utal”). It’s also synonymous to “tunggak,” which has Spanish origins and refers to someone who has poor comprehension or is slow in the head. Filipino variants include “tange,” “mangmang,” “gung-gong,” “tonto,” “ungas,” and “hunghang.” Before people had a better understanding of learning disabilities, the word became an insult and, maybe considering its somewhat alliterative appeal, is still widely used to this day.

“Letse” comes from the Spanish noun “leche,” which means milk. The UP Diksiyonaryong Filipino also has another entry for “letse,” which is “alipusta para sa tanga; ibig sabihin, pasusuhin pa.” It’s like saying that the person on the receiving end of your curse is immature or an infant who needs to still be breastfed.

Filipino Adventurer Savvy Seasoned Filipino Words Staying In
Your Guide to Thriving in This Strange New World
Staying
In? What to watch, what to eat, and where to shop from home
OR
Heading
Out? What you need to know to stay safe when heading out