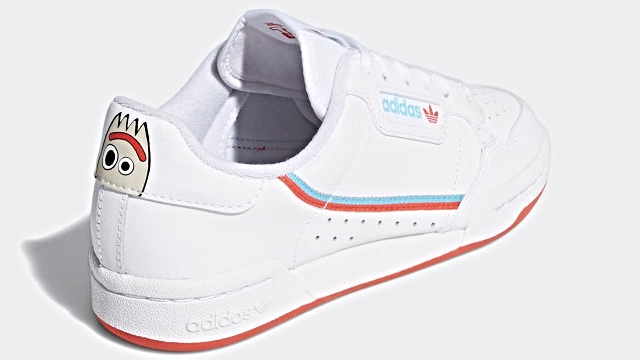 Do You Think These Toy Story-Themed Kicks Come to Life When You're Not Looking?

We're tempted to write "ANDY" on the soles.

(SPOT.ph) Nineties and early 2000s kids, did you ever try to spy on your toys and see if they would start walking and talking if they thought you weren't looking? Admit it, you probably tried it at least once—because we've been doing it since Pixar's original Toy Story film stole our hearts in '95. With Toy Story 4 now showing, a whole new generation of kids is getting to meet Woody, Buzz, Jessie, Rex, Slinky, and everyone in the gang—and they're probably spying on their toys now, too. Whether you're an old or new fan of Andy and Bonnie's toys, you might want to check out Adidas' new sneaker collection inspired by the characters from the film franchise—and they look so much like their cartoon counterparts that we're beginning to wonder if they'll come to life, too!

The collection features some of The Three Stripes' popular silhouettes including the Continental 80, the Ultraboost, and the NMD R1 sneakers, each decked out in a colorway inspired by some of your fave Toy Story characters. The franchise's dynamic duo Woody and Buzz are represented in two new designs of the the Ultraboost 19 that match their outfits. Bo Peep, on the other hand, is present in the form of a pastel pink NMD R1, while the newest member of Bonnie's toy chest, Forky, has his own personal iteration of the Continental 80.

Here's a peek at the entire collection:

We're keeping our fingers crossed that the Adidas x Toy Story Collection will be available locally, but for now, you can cop these cool pairs online.

Toy Story 4 Adidas Shopping Sneakers Adidas X Toy Story 4 Shoes Continental 80s Ultraboost
Your Guide to Thriving in This Strange New World
Staying
In? What to watch, what to eat, and where to shop from home
OR
Heading
Out? What you need to know to stay safe when heading out