Princess Diana Style: Where to Find Sweaters, Tops Inspired by Di
Loading
Already a member? Log in
No account yet? Create Account
Spot.ph is your one-stop urban lifestyle guide to the best of Manila. 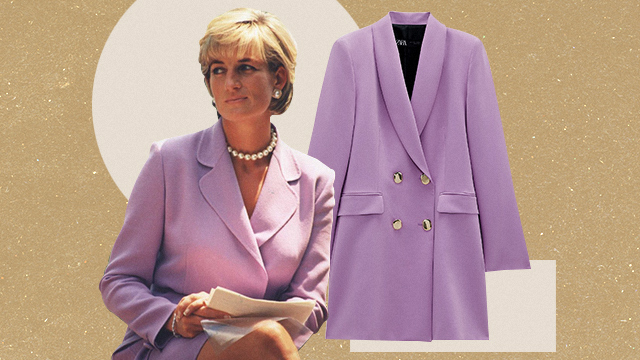 10 Princess-Diana Inspired Pieces to Make You Feel Like Royalty

Emulate the memorable style of the people's princess!

(SPOT.ph) The late Princess Diana was a cultural icon whose name and image continue to be ubiquitous in films, books, magazines, and television series—the fourth season of Netflix’s The Crown is only the latest to portray the people’s princess. Over two decades after her tragic death, Diana’s story is still one plagued by mystery and intrigue. As a result, her images evoke a compelling mysticism and an unceasing timelessness—a living memory forever frozen in time. Thus, as with Audrey Hepburn donning that unforgettable little black dress in front of Tiffany’s or Marilyn Monroe’s white dress blowing upwards on a New York City street, Diana’s distinctive style choices continue to be the object of admiration and inspiration all over the world. Below, we look back at some of her most memorable outfits and ensembles and round up some pieces you can shop now if you’d like to achieve her look and all its effortless grace.

Also read:
So, How Did the Real Lady Diana Pull Off That "Uptown Girl" Dance?
Diana Takes the Spotlight, But The Crown Is Still Very Much About the Queen

Channel your inner Princess Diana with these elegant pieces you can shop now:

Despite the restrictions of royal life, Diana wasn’t afraid to spice up her looks with bright pops of color and this head-turning lavender piece is proof—purple is the color of royalty after all, right? You can emulate the candy-colored ensemble with this Zara frock, which sports a similar hue.

If you browse Diana’s eclectic fashion history, you’ll find many off-shoulder dresses donned by the princess, but perhaps none as famous as her so-called "Revenge Dress." Diana wore the form-flattering piece, designed by Christina Stambolian, in 1994 at the Serpentine Gallery in London for a party hosted by Vanity Fair. The night she wore the dress was the same evening her estranged husband Prince Charles' tell-all documentary premiered on national television—a program where he would confess to his affair with Camilla Parker Bowles, albeit subtly. Coincidence? We think not. You can rock this Bottomline dress if you, too, are looking to show someone what they missed out on (wink, wink).

It should come as no surprise that Princess Diana appreciates a good all-white ensemble—the radiant and ethereal qualities of such a look fits right into her graceful, refined aesthetic. You can try it out for yourself with this chic crepe blazer from Mango. Pair it with other pristine white pieces like straight-cut trousers or a pencil skirt. Diana wore a similar piece to meet with none other than future presidential candidate Hilary Clinton. Imagine just how powerful the aura (and the fashion!) in that room was.

Though Princess Di’s style took some pretty bold strides (at least for a member of the royal family), her looks always exuded timelessness. She often opted for classic jewelry pieces like these pearl earrings that she wore on a visit to Nova Scotia. You can feel like royalty, too, when you rock this pair from local brand Penny Pairs, which features a similar design.

Though Princess Diana was a public figure often seen wearing formal gowns and well-tailored suits, even her casual looks are the object of fashion lovers’ admiration to this day. The classic white polo, for its marriage of elegant and effortless cool, fits right into Diana’s style. Try this ivory button down from Uniqlo’s latest +J Collection if you still don’t have your own—trust us, it’s a wardrobe must-have.

There’s something so captivating about seeing royalty walking the streets in shorts and sneakers, as Princess Diana did while out in St. Tropez in 1997. Without a doubt, her form-fitting, no-frills halter top stole the show. Halters were a staple of the late '90s and early 2000s and have quickly made a comeback, so you won’t have a hard time rocking the look with this bodysuit from Bershka. Style it with white kicks, high-waisted white shorts, and a chunky black belt to complete your Diana-inspired ensemble—Gucci clutch not required.

The New Yorker called Princess Diana's sheep-patterned red pullover her "most notorious sweater," stating that it would go on to become "as viral as an item of clothing could be in the era before social media." Despite its quirky print, the piece looks old-school sportswear chic paired with the princess' stylish sunglasses and crisp white pants. You can rock the same cutesy-meets-classic aesthetic with this Vero Moda sweater, which sports a bright red shade and a festive Christmas pattern.

Though it’s one of her lesser-known looks, this earth-toned bomber jacket Diana wore in the '80s is an early example of her effortlessly chic casual style, of which large outerwear is a staple. This beige H&M jacket would be a great dupe to create your own interpretation of the outfit.

This jewel neckline red dress is perhaps one of Diana’s more classically princess-like looks, so if you’re looking to emulate the pop-culture icon’s repertoire of formal attire, this would be a wearable pick that you can rock on many occasions. Try it out with this wrap dress from Dorothy Perkins, which is appropriate enough for even your stiffest family dinners and work events, but still has standout power thanks to the eye-catching color.

Just as Diana wasn’t afraid of color, neither was she afraid of striking prints and patterns—just check out this bold plaid blazer in a red-blue-and-white colorway. We know it’s a bit intimidating to wear a distinct pattern like this, but you can easily rock the look with a plain white tee and your fave jeans underneath. Try this checked Stradivarius blazer if you're audacious enough to don the eye-catching print. You can also opt to wear the piece over a skin-tight black dress or your go-to polo and trousers. Trust us, it’s more versatile than it looks!

Princess Diana The Crown Shopping Savvy Adventurer Seasoned Zara Bottomline Zalora Mango Penny Pairs Uniqlo Bershka Vero Moda H&m Dorothy Perkins Stradivarius Guide Greener Heading Out
Your Guide to Thriving in This Strange New World
Staying
In? What to watch, what to eat, and where to shop from home
OR
Heading
Out? What you need to know to stay safe when heading out