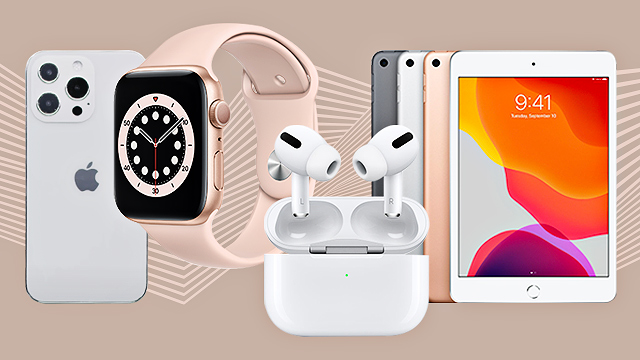 The Most Exciting New Apple Releases to Expect in Late 2021

(SPOT.ph) Gadget geeks everywhere are waiting in anticipation for Apple's huge annual fall season release. Every year between September and November, the tech giant rolls out all-new flagship devices and upgrades to their existing models. Despite a consistent release schedule, Apple is notoriously hush-hush about their latest innovations, leaving the Internet guessing—or more accurately, speculating and meticulously investigating. With Apple's next big event just a few months away, the web is brimming with leaks, rumors, predictions, and unconfirmed insider info about what to expect from the company before the year ends. Below, we list the most exciting new Apple gadgets expected to release in late 2021.

Also read: All the Rumors About the iPhone 13: Features, Prices + More

These are the most exciting new Apple products that are expected to be released in late 2021:

No doubt the iPhone 13 will be the star of the show when Apple unveils their latest line of gadget innovations and updates later this year. Despite no official word from the tech giant, experts seem to agree that we will be seeing a new iPhone before 2021, though what its name will be is still up for debate. Bloomberg's Mark Gurman, in his newsletter "Power On," notes that upgrades to the iPhone probably won’t be too drastic and leading tech authorities like TechRadar and Marques Brownlee have noted that like the iPhone 12, the iPhone 13 series will include four phones, following the blueprint set by the former: the iPhone 13 Mini, the iPhone 13, the iPhone 13 Pro, and the iPhone 13 Pro Max. The size and price of each model is expected to be similar to those of the same name in the iPhone 12 series as well. Gurman believes updates on the latest models will emphasize better camera features and overall faster performance thanks to a new A15 chip.

Well-know Apple leaker dylandkt predicted the release of third-generation AirPods (a.k.a. the Airpods 3) along with the upcoming iPhone 13. MacRumors has also noted the possibility of new Airpods in 2021 while Gurman outright tells fans to expect it, noting that this year’s model will be "entry-level" and therefore, likely won’t have the same high-end features as the AirPods Pro (such as active noise-cancellation) and will have a price closer to that of the AirPods 2, which currently start at P9,490.

3D renders of the possible AirPods 3 design were released in March by Gizmochina—they claim to have received the images from a trusted "supplier." The renders show the supposed AirPods 3 model features a charging case with a short but wide shape identical to the AirPods Pro, but with earbuds that don't sit in-ear.

Also read: Here's How Much the AirPods 3 Is Probably Going to Cost

Apple last updated their iPad Mini series—a more compact version of their flagship tablet—in 2019 with the iPad Mini 5. According to Gurman, major upgrades should be expected from the device this year, claiming that it "is destined to be an Apple fan favorite with thinner borders and a complete redesign." TechRadar reports that the newest iPad Mini may house an A13 Bionic chipset (the same chip used by the iPhone 11) and feature an 8.5-inch screen—sized up from 2019’s iPad Mini, which sported a 7.9-inch screen. While the iPad Mini 5 still makes use of a home button, recent unofficial renders leaked by known insider Jon Prosser suggest an all-screen interface. Plus, Prosser’s renders indicate that Apple could be working on a smaller Apple pencil, specifically made for the iPad Mini.

In 2021, a new MacBook Pro with an M1X chip is expected to arrive between September and November, reports Tom’s Guide. The M1X chip is an upgraded version of the M1. For context, the M1 is the chip housed by Apple’s newest iMac line, released in April of this year, so their new MacBooks may be even more powerful than their latest desktop computer. As of writing, not much is known about the upcoming laptop, but Apple leaker Ming-Chi Kuo claims that the new MacBooks "will cancel the curvy design of existing models' top and bottom parts and adopt a flat-edged form factor design similar to the ‌iPhone 12‌."

The Apple Watch Series 6 was released in September 2020, so a 2021 update comes right on time for those who skipped on the previous model and are waiting for an upgrade. Gurman predicts "flatter displays and updated screen technology alongsider a faster processor" for the Series 7. He also notes the possibility of a Time to Run feature—a follow-up to Time to Walk, which lets you listen to inspiring talks and curated playlists while going for a stroll—as well as built-in Audio Meditations for Fitness+ subscribers.

Shopping Savvy Adventurer Seasoned Staying In Apple Gadgets Iphone Iphone 13 Iphone 13 Leaks Apple Leaks Apple Watch Ipad Macbook Airpods Topspot Shopping
Your Guide to Thriving in This Strange New World
Staying
In? What to watch, what to eat, and where to shop from home
OR
Heading
Out? What you need to know to stay safe when heading out