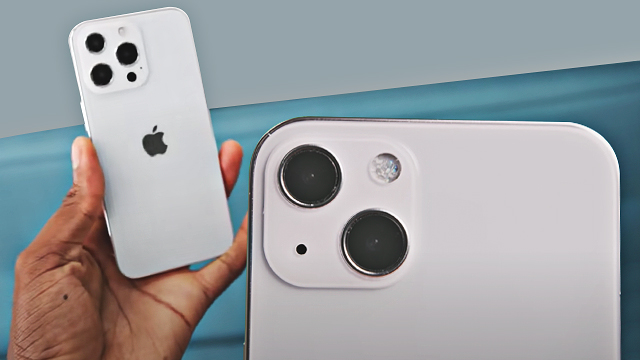 All the Rumors About the iPhone 13: Features, Prices + More

Here's what the experts and insiders are predicting.

(SPOT.ph) At the rate that technology moves these days, it often feels like a new, updated product is released before we can even truly enjoy our latest tech investments. Apple may be one of the brands that is most notorious for perpetuating this sentiment. And yet, its customer base remains unflinchingly dedicated to every new release. So for those of you who own the iPhone 11 or 12, it may feel like you just bought your baby yesterday, but we’re here to tell you that the iPhone 13 is coming—and it’s coming soon.

As per usual, Apple has been pretty much silent leading up to the release of their newest flagship smartphone series, keeping tech geeks and Apple loyalists all over the world guessing. Luckily, the period right before a new iPhone release is also when industry experts and Apple insiders can really shine. The Internet is a trove of possible device leaks, rumors, and speculations all about the upcoming iPhone lineup. While nothing has been officially confirmed or revealed by Apple, it sure is exciting to imagine the possibilities! Below, we list all the leaks and rumors about the soon-to-be-released iPhone 13 series that most experts seem to agree on.

Also read:
Apple Is Releasing a Portable Battery Pack for Easy On-the-Go Charging
Apple Just Opened What Might Be Their Most Beautiful Store Yet

Here are all the features and specs tech insiders are expecting from the upcoming iPhone 13 series:

Though the popular consensus is that Apple’s upcoming phone series will be called the iPhone 13 (following the 11 and 12), the tech giant has strayed away from the chronological naming pattern before with models like 2016’s iPhone SE and 2017’s iPhone X, so a different name this time around wouldn’t come as a surprise. MacRumors has pointed out the possibility that 2021’s lineup may be dubbed the iPhone 12s, positioning it as an update to the previous model in the same vein as the iPhone 4s, 5s, 7s, and XS. This theory makes even more sense when you consider that experts are expecting the so-called iPhone 13 series will have many similarities to its predecessor including available models and their sizes.

An interesting fun fact to note, Tom’s Guide reports, is that over 18% of customers (based on a survey of 3,000 Apple users conducted by SellCell) said they would be skeptical about purchasing the smartphone series if it were named iPhone 13 due to the number’s association with bad luck.

Models in the Series

Leading tech authorities like TechRadar and Marques Brownlee have noted that like the iPhone 12, the iPhone 13 series will include four phones, following the blueprint set by the former: the iPhone 13 Mini, the iPhone 13, the iPhone 13 Pro, and the iPhone 13 Pro Max. The size of each model is expected to be similar to those of the same name in the iPhone 12 series as well. Brownlee showed dummy models of the 13 series (created based on leaks and expert predictions) in a video posted to his YouTube channel on July 27 and the similarities between the two series are easy to see.

According to AppleInsider, bronze or possibly gold) and matte black models are rumored for the iPhone 13 Pro and Pro Max, at par with the iPhone 11 and 12 series, which offered their Pro and Pro Max models in more neutral tones compared to the smaller models, which came in whimsical tones like purple, yellow, and green. With that in mind, it’s likely that Apple will stick to the eye-catching tones they’ve used for the 11 and 12 series, at least for the iPhone 13 and 13 Mini.

Recently, Apple has gone for a more playful approach when choosing shades for their product lineups, most notably the colorful M1 iMac series and the purple iPhone 12, both unveiled in 2021. That being said, it won’t come as a surprise if they follow this same strategy with the iPhone 13. Orange has been a shade rumored to appear on the upcoming smartphone lineup, according to TechRadar, but a theory that really caught the Internet’s eye was that a pink iPhone 13 would be included in the series. Reported by CNET, Forbes, and Slash Gear among others, the rumor took off after a render of the model went viral online thanks to a tweet from the Peng Phones Twitter account. The render was imagined and created by Instagram artist aliartist3d. Peng Phones noted in their repost of the aforementioned rendered model that the pink iPhone 13 (if it would even see the light of day) will be released in December—likely a few months after the initial launch of the iPhone 13 series, much like the purple iPhone 12 came months after the original unveiling of the iPhone 12 series. Despite the vibrant shade that went viral on Instagram and Twitter, AppleInsider notes that "supply chain sources say that the rose gold color will be very pale in this series."

According to CNET, the rumored sizes for each iPhone 13 model’s displays are as follows:

These display sizes are the same as the iPhone 12 series, but CNET points out that the new models might be “just slightly thicker.” A MacRumors report notes that new models are expected to be 7.57-mm thick, compared to the iPhone 12’s 7.4-mm thickness, though users most likely won’t notice this change. Trusted tech analyst Ming-Chi Kuo, as reported by CNBC, predicts that the 13 series will have a smaller notch than its predecessors as well as a 120Hz refresh rate—double the rate of the iPhone 12—though TechRadar points out that the 13 Mini and 13 may still retain the previous model’s 60Hz.

Other possible design changes, according to Tom’s Guide, include moving the speaker towards the top of the device (compared to its current placement on the camera notch) as well as both the SIM card tray and power button moving downwards on either side of the phone.

TechRadar reports that the iPhone 13 series will be powered by the A15 chipset (up from the iPhone 12’s A14), meaning faster and smoother usage, though no specific details about how powerful the new chip will be have been released. It’s also rumored that Apple may release a 1 TB phone for the first time ever in 2021.

Most tech experts seem to agree that the iPhone 13 series will feature a diagonal camera arrangement on the back and that the entire lens system may be slightly larger than the iPhone 12’s. According to TechRadar, all cameras on every iPhone 13 model (front and back) are expected to have 12 megapixels each, just like the iPhone 12, though there may be improvements on the telephoto lens (at least on the Pro models) as well as improved depth perception.

The iPhone 13 series is expected to have larger built-in batteries across the board compared to the iPhone 12. Tom’s Guide and TechRadar both report up to 4,325mAh capacity for the largest phone in the series. In comparison, the iPhone 12 Pro Max houses 3,687 mAh in terms of battery capacity and boasts about 17 hours of nonstop video playback. Meanwhile, the 13 Mini will offer 2,406 mAh and the 13 and 13 Pro will have 3,095 mAh.

The iPhone 13 series is expected to be released some time between September and October. The iPhone 8, XS, and 11 were released in September of 2017, 2018, and 2019, respectively, while the 12 was unveiled in October 2020, so the latest model is expected to drop around the same time this year—most likely late September as the iPhone 12 was actually released late due to production delays brought about by the COVID-19 pandemic.

With four different models expected to be included in the iPhone 13 series, you’ll likely see four different price ranges depending on your budget and personal preferences. Tom’s Guide and TechRadar have noted that the iPhone 13 lineup will likely be priced similarly to the 12 series—the latter even shared that the 13's prices may be exactly the same as the 12's. The iPhone 12 Mini, the smallest and most affordable of the set, had a starting price of U.S. $699 (roughly P34,922), though the starting price in the Philippines was at P43,990. Meanwhile, the iPhone 12 started at P49,990, the 12 Pro at P62,990, and the 12 Pro Max at P68,990. Keep in mind the starting prices for each model only refer to the lowest memory capacity of each (64 GB for the 12 Mini and 12, 128 GB for the 12 Pro and 12 Pro Max).

You can check out the full list of original iPhone 12 prices in the Philippines below:

Iphone Apple Iphone 13 Shopping Savvy Topspot Shopping Adventurer Seasoned Staying In Gadgets Iphone 13 Leaks Greener
Your Guide to Thriving in This Strange New World
Staying
In? What to watch, what to eat, and where to shop from home
OR
Heading
Out? What you need to know to stay safe when heading out