Best Apple iPhones You Can Get If iPhone 13 Is Not an Option
Loading
Already a member? Log in
No account yet? Create Account
Spot.ph is your one-stop urban lifestyle guide to the best of Manila. 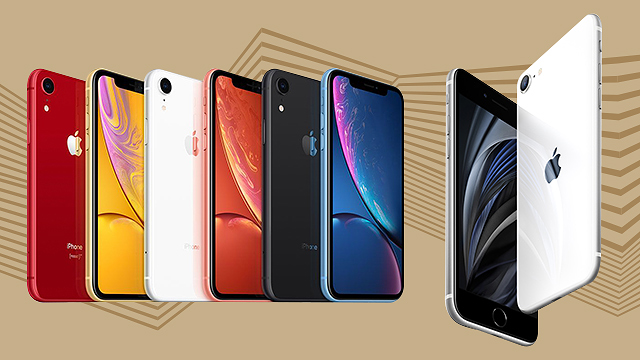 The iPhones Still Worth Getting in 2021, If the iPhone 13 Is Not an Option

(SPOT.ph) It’s the time of the year again when the folks at Cupertino unveil a new lineup of the latest iPhones. While no one can be faulted for wanting the fresh and shiny new models—they’re faster and packed with the latest tech, of course!—don’t count out the earlier iPhone models yet. Apple is known for making products that are ahead of the curve and the iPhones are no exception. Even if they’re from a previous generation, a few iPhone models can still hold up even when compared to other newer smartphone models.

There could be several reasons for holding off on getting a new iPhone such as being currently locked-in to an existing plan while in search of a better deal. Pretty valid reasons, if you ask us, but we think there’s another good reason for going for an older model: They are still pretty great.

Also read: The Most Exciting New Apple Releases to Expect in Late 2021

For those not rushing to the queue to get the iPhone 13 models, here are the iPhones that are still worth getting in 2021:

Large phones with screens exceeding six inches have become the default form factor for most smartphones. It doesn’t seem long ago that the standard screen size for smartphones was below five inches. The iPhone SE has the screen size of the iPhone 6 at 4.7-inches and has a chassis that’s similar to the iPhone 8. With a frame that’s only 13.84 x 6.73 cm, the iPhone SE is an extremely pocketable phone. It can also survive water splashes, dust, and temporary submersion thanks to its IP67 rating. The phone’s multi-touch Retina HD screen has a resolution of 1334x750 with 326ppi, True Tone, Dolby Vision and HDR10.

While its screen and exterior may look like older iPhones, it’s the internals that matter. It has a beefy A13 Bionic chip with a third-generation Neural Engine made by Apple. This same CPU can be found on the iPhone 11 models. This six-core CPU has two high-performance Lightning cores and four energy-efficient Thunder cores. The single-lens 12-megapixel camera can deliver advanced shooting modes with Smart HDR, 4K/60fps video, optical image stabilization and slo-mo video.

The iPhone 11 ticks all the boxes if you are looking for a phone that combines good price, specs, and performance. An A13 Bionic CPU keeps things running at a steady pace with a pair of lenses at the back that can shoot wide and ultrawide 12-megapixel photos with good low light performance and optical image stabilization. The 6.1-inch Liquid Retina HD screen is ample for most users with a 1792 x 828 pixel resolution and 326ppi.

While the phone lacks the bells and whistles of the Pro models, the iPhone 11 is still an ideal daily driver for 2021. The uprated IP68 rating gives it enhanced dust, splash, and water resistance. It can even survive a two-meter water submersion for half an hour. Audiophiles will appreciate the iPhone 11’s impressive audio capabilities such as support for spatial audio for more immersive sound and Dolby Atmos. Based on real world tests, the iPhone 11’s battery can last a day even with heavy use.

Also read: iPhone Maintenance 101: How to Preserve Your Battery Health

When it came out, the iPhone XR came at a lower price than the top-tier XS models, the main reason being the XR’s lack of an OLED screen. For general usage, the 6.1-inch Liquid Retina IPS LCD display is fine and comes at 1792 x 828 pixel resolution. The screen almost covers the entire phone with the exception of the notch that houses an array of sensors, speaker, camera, and mic.

Although the XR has an older A12 Bionic processor, it’s still adequate for all the main smartphone tasks. The 8th-generation iPad released in 2020 still used an A12 chip, proving that the CPU is still a solid performer. Note that the XR does not have a headphone jack but gives the option to use a Lightning headset or Bluetooth 5.0 for wireless audio. There is a single-lens wide-angle camera at the back which takes 12-megapixel shots. Autofocus is fast while the f/1.8 aperture and a new sensor ensures better low-light shots. The camera’s depth of field can be viewed in real-time using the Depth Control feature. Everyday durability is enhanced with the phone’s series 7,000 aerospace-grade aluminum frame and IP67 rating for dust, water, and splash resistance.

The iPhone 12 was only released in 2020 but it’s still in the running as a capable phone for this year, mainly because of its specs. For starters, the iPhone 12 supports 5G for the first time which guarantees fast network connection. The new screen and chassis still feels fresh. The 6.1 Super Retina XDR OLED display has a whopping 2532 x 1170 pixel resolution and 460 ppi. It still boasts of a True Tone and Wide color display with a dazzling 1200 nits brightness. The updated A14 Bionic chip is 50% faster than other comparable smartphone CPUs because of its six-core CPU and four-core GPU design.

The iPhone 12 is also more durable compared to previous models with its Ceramic Shield front cover that gives the display added strength. It also sports a dual-lens camera at the back. These cameras can record Dolby Vision HDR, which gives videos a better dynamic range.

Shopping Staying Savvy Adventurer Seasoned Gadgets Topspot Shopping Iphone Apple Con-00263 Online Shopping
Your Guide to Thriving in This Strange New World
Staying
In? What to watch, what to eat, and where to shop from home
OR
Heading
Out? What you need to know to stay safe when heading out