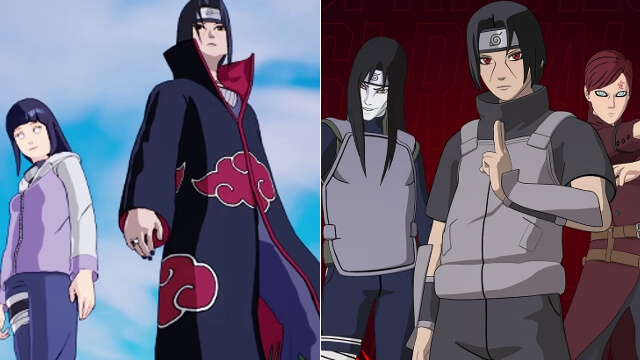 Face Your Rivals: Play as These All-New Naruto Shippuden Skins in Fortnite

Plus, you've got some time to try and score free Naruto items.

(SPOT.ph) Following the colorful crewmates of Among Us joining Fortnite as wearable back blings earlier this month and the arrival of Darth Vader on the Fortnite island as a Mythic enemy boss earlier this week, Fortnite isn't slowing down on the collabs. Four Naruto Shippuden characters will be dropping by the item shop as skins for players to equip in-game by the end of this week.

Here's everything we know about the Fortnite Naruto Shippuden skins:

Four of Naruto's allies and on-again-off-again foes are dropping in the Fortnite Item Shop on Friday, June 24. The characters joining as in-game skins are Sasuke's brother Itachi Uchiha, the Shukaku host Gaara, the Legendary Sannin Orochimaru, and the kunoichi known as Hinata, Naruto's wife.

These four characters join Naruto himself, Sasuke, Sakura, and Kakashi as part of the Naruto set, which first dropped in the game last November. The aforementioned skins will most likely also become available for purchase in the item shop, alongside the new skins when they come out.

Itachi, Gaara, and Hinata will also have back blings that come with their skins. Hinata comes with her backpack from the series, Gaara comes with a sand gourd as his back bling, and Itachi comes with a Black Ops Mask that itself has four variant styles. These back blings come with purchase of the select skins, but once purchased, you can equip them onto any character in your locker. Meaning, yes, we will be rocking the Bruno Mars skin with a Naruto Black Ops Mask, just for fun.

Dropping alongside the skins are two new Naruto pickaxe's (the primary melee weapon in Fortnite) and two emotes. Two gliders will also become available; Gaara's Sand Cloud glider, which can only be used if you're equipped with Gaara's skin, and the Manda glider, which you can alternatively unlock for free instead of buying in the item shop.

All four skins are of Epic rarity in-game, meaning that they'll individually cost 1,500 V-Bucks (the in-game currency) in the Fortnite item shop. You can, however, elect to buy the skins in bundles, with the Itachi & Orochimaru Bundle or the Gaara & Hinata Bundle, to get two skins and various other items for the discounted price of 2,100 V-Bucks per bundle.

You can purchase in-game 1,000 V-Bucks for P428 and 2,800 V-Bucks for P1,071. Payment methods include Credit Card, Pay Pal, GCash, Razer Wallet, or the e-store of the respective console you're playing on.

The skins drop in the Fortnite item shop at 8 a.m. on June 24. Alongside their drop, in-game challenges will become available, where you'll be tasked to get kills, catch fish, and survive until the near-end of the match. Doing enough of these challenges will get you the free Manda glider and Akatsuki wrap for your weapons. The challenges will only be available for two weeks starting when the skins drop.

Check out the skins below.