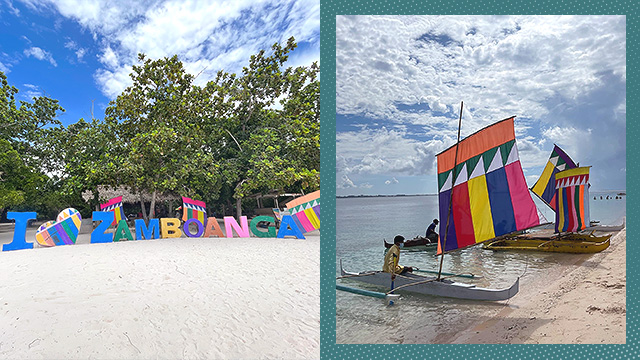 (SPOT.ph) The Philippine coastline runs a total of 36,289 kilometers. It’s dotted with beaches, bays, gulfs, islands, and islets with sands of varying colors from powdery white to charcoal black. Certain shores are more famous than the others, while some, though not as well known, are no less inviting and breathtaking.

Zamboanga City is home to two such destinations—Great Santa Cruz Island and Once Islas—places that have largely escaped the clutches of large-scale tourism, leaving them rougher yet unspoiled and more peaceful than most popular beach haunts.

Also read: 10 Exciting Things to Do in the Zamboanga Peninsula

If you're flying to the Zamboanga Peninsula anytime soon, make sure to check out these beaches in Zamboanga City:

These two islands lie about 15 minutes off Zamboanga City’s lively Paseo del Mar. The bigger one, called Great Santa Cruz, is open to tourists; while the smaller of the two, Little Santa Cruz, is off-limits to the public.

Both islands, though different in size and purpose, share one special thing in common: their blush-pink sand. The pinkish hue is a result of pulverized red pipe organ corals mixing in with the naturally white sand.

In an interview with SPOT.ph, Charles Anthony C. Rotoni, Market and Product Development Officer of the Department of Tourism’s Regional Office 9, shares why Great Santa Cruz Island is a must-visit for anyone traveling to Zamboanga City.

"Aside from its inclusion in the 2017 National Geographic Magazine's [21] Best Beaches in the World list, the island is also at the forefront of best sustainable tourism practices," said Rotoni. "These have put [Great] Santa Cruz Island as the most immediate yet pristine island destination in the city."

That’s why more than swimming and snorkeling, the highlight of every trip to the island is the Yellow Boat Tour (P200/head), which takes visitors to a lagoon and a 100-hectare natural mangrove forest.

The area is home to two kinds of seagrass and 14 species of mangroves. They serve as a filter against washed-up trash and as a nutrient-rich breeding ground for various species above and below the waterline. One square meter gives off 10 liters of oxygen.

Launched as an environmental advocacy program of the local government unit in 2015, the Yellow Boat Tour aims to educate the community and visitors about the dangers of mangrove deforestation and dynamite fishing and the importance of caring for the environment.

Guests are in for a treat as they are allowed to interact with the mangrove’s resident non-poisonous upside-down jellyfish also called "Cassiopeia." They can also harvest and eat latok or seagrapes fresh from the clear waters.

Both Great and Little Santa Cruz Islands are included in the Philippines' catalog of Protected Landscapes and Seascapes. The bigger one is also home to a community of Sama Banguingui, an indigenous group that settled mostly near bodies of water.

"They are the community enablers of the many touristic activities of the island,"Rotoni explained. With this, the locals are mostly engaged in tourism-related pursuits such as guiding and selling souvenirs.

Being a protected area means that the LGU has strict measures in place to ensure that Great Santa Cruz Island is kept clean and sustainable. The tourism officers take their mandate seriously. Before guests are allowed to board their boats, an orientation is conducted where they’re asked to line up their bags in front for inspection.

Single-use plastics are not allowed with very few exceptions like feminine hygiene products, diapers, and medicines, provided these are kept in sealed bags or reusable plastic containers. Guests are also strictly prohibited from bringing back home corals, shells, and sand as souvenirs. Smoking is not allowed.

Great Santa Cruz Island is managed directly by the LGU and is open to travelers from 7 a.m. to 2 p.m., except Mondays and Fridays. These off-days allow the locals to clean up the island.

Zamboanga City’s other gem is this cluster of islands that until 2018 was completely off the tourist map. Through the combined efforts of the LGU and the local community, Once Islas (Eleven Islands) is poised to become the city’s next popular beach destination.

In a separate interview, the local community guide and president of the 11 Island Tour Guide Association Huraida Malik shared a curious bit of trivia: There are more than 11 islands in the area.

Of these islands, only three, namely Sirommon, Baung-Baung, and Bisaya-Bisaya, are open to tourists. Four islands are inhabited by mostly Sama Banguingui communities.

Once Islas was opened to tourists on July 1, 2018. Before then, the locals engaged in fishing, seaweed planting, and foraging for their livelihood.

Guests who do not want to bring their own food can coordinate with the City Tourism Office to ask the local Sama Banguingui women prepare a seafood feast for lunch (P350/head).

The part-time peace advocate/volunteer of over 15 years mentioned that each of the 11 islands has a rather interesting backstory to its name.

Sallangan for example was named after the toxic jellyfish called "bulung sallang" in the Sama Banguingui dialect. Kabugan, the local term for bat, is a bat sanctuary. Buh-Buh was so named because of the many unmarried women (called "babuh-babuh") who lived on the island.

Perhaps the most interesting of all the names is that of Bisaya-Bisaya island. Lore has it that there were once two friends who lived on the island, one is a Bisaya and the other a Muslim. One day after fishing, the friends compared their catch.

The Bisaya caught more fish, so the Muslim friend suggested that they should just pool their catch together and divide it among themselves equally. The Bisaya refused, saying that it should be bisaya-bisaya or kanya-kanya—my catch is mine alone and yours is yours.

Aside from the quirky names, each of the three islands open to visitors has their own activities aside from swimming. You can trek to a tidal pool or the rock formations on Bisaya-Bisaya island. Baung-Baung will soon have trails for trekking.

Sirommon, being the largest of the three, has the most activities for travelers. Guests can go snorkeling or diving. Trekking to the other side of the island is also an option, as it features a mini wharf, treehouses, a sandbar surrounded by starfish, and a nesting area for pawikan (Hawksbill sea turtle).

Marine biologists have identified about 400 kinds of flora and fauna on Sirommon Island, including corals, giant clams (taklobo), and different species of fish.

Currently, there are two island-hopping options. The shorter and more affordable BiBa Route drops visitors off on Bisaya-Bisaya and Baung-Baung islands for P1200/boat/five guests.

The more expensive yet also more expansive Island Cruise covers the two aforementioned islands plus Sirommon and cruises past the other eight for Php2000/boat/five guests.

An additional P300 is charged for the tour guide fee and cottage rental is at P150/cottage.

Once Islas is open to tourists from 7:30 a.m. to 2 p.m., except Mondays and Fridays. Similar to Great Santa Cruz Island, Once Islas has a Garbage In-Garbage Out policy.

Malik said that they are hopeful that tourism would be back in full swing again. "Nasasayahan kami kasi dumarami na ulit ang mga turista na pumupunta."

AirAsia has increased their MNL-ZAM flights to daily from the previous frequency of six per week. This expansion allows AirAsia to fly more than 200 tons of both passenger and commercial cargo per month, a welcome development for partner enterprises set to grow their shipments between Zamboanga City and Manila.