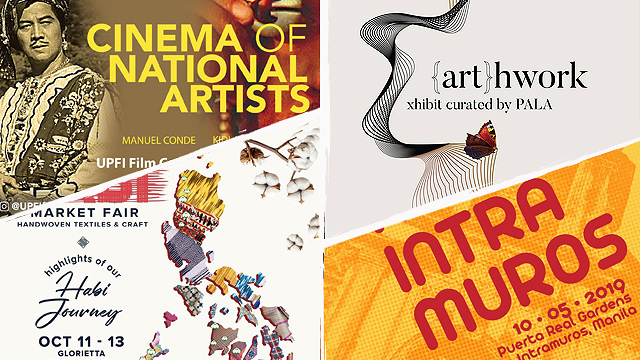 10 Free Things to Do in Manila This October

Add these to your calendar!

(SPOT.ph) October may be a little rainy, but that doesn’t mean you have to stay at home on weekends or no-work days. After all, there are plenty of fun things to do around the city that take place indoors and won’t cost you a centavo! And when the sun's out, it's always worth using it on some quality time with yourself, a significant other, or your friends.

We round up 10 activities in Manila that you can do for free this October:

Marvel at an outdoor light-and-music show at the Cultural Center of the Philippines with "Sinag: Festival of Radiance." Each show, where lights dance to the music of "Pagdiwang sa Ginintuang Pagsilang" by National Artist for Literature Bienvenido Lumbera (lyrics) and National Artist for Music Ryan Cayabyab (music), lasts for approximately 10 minutes, which you can witness right on the Cultural Center of the Philippines’ (CCP) lawn—a perfect way to take a break if you’re in the area. If you miss the show, you can still take a nice night photo in front of the 20-foot sundial installation by multimedia artist Toym Imao, which represents the significance of arts and culture in society through time. Lanterns created by talented Kapampangan craftsmen also decorate the theater's façade and lampposts around CCP.

Sinag: Festival of Radiance runs until January 5, 2020 at the Cultural Center of the Philippines, Roxas Boulevard, Pasay City. The light-and-sound show is scheduled daily for 10 minutes every 6 p.m., 7 p.m., 8 p.m., and 9 p.m.

Bring your dogs to the mall and score freebies

Are you the type of pet parent who'd rather stay home with your little ones than go out to shop? Well, you can do both. Robinsons Malls is relaunching its Happy Pet Club on October 6 at Robinsons Magnolia's newest al fresco area, and you can sign up for free. Your furbabies can get free anti-rabies shots, vet consultation, pet food and accessories, and a passport that allows them to roam around selected Robinsons Malls all over the Philippines. There will also be talks on responsible pet ownership, a fashion show, and exciting games.

Likhang HABI Market Fair returns for its ninth edition of celebrating the Filipino tradition of weaving. This year's theme, "Highlights of our HABI Journey," focuses on the techniques and skills imbibed by the country's best weavers. Aside from showcasing traditional textiles and artisan products by 52 merchants, the three-day fair also features a HABI Craft Corner where visitors can learn the basics of weaving.

See the first map that showed the Philippines' name as "Filipina"

The first time the Philippines showed up on a map was on a 1554 version by Giovanni Ramusio and Giacomo Gastaldi, where the country was called "Filipina." You can learn more about this fascinating map and the Philippines' history at a visual lecture by John Silva, executive director of the Ortigas Library. The event is free, but you can call ahead to reserve a seat. They also welcome donations of used books.

Spend some quality time with your pets

While people from the North can celebrate World Animal Day at Robinsons Magnolia, pet parents from the East can drop by Ayala Malls Marikina for a fun-filled day with your four-legged companions. Paw Parade has free events like a pet blessing, a fashion show of the latest in pet wear, and even a lecture on dog obedience and behavior.

Hop on a 19th-century tranvia and travel back in time

While you can walk or rent a scooter for free to go around Intramuros, there's no better way to relive history than riding a tranvia reminiscent of the 19th-century streetcars that once plied the city. On October 5, in time for the arts-and-crafts market called We Art Intramuros, you can hop on one from 2 p.m. to 6 p.m. The ride will have stops at Plaza Roma, Fort Santiago, Baluarte de San Diego, Puerta Real, and Puerta del Parian.

Watch a film directed by a National Artist

Are you a budding cinephile? Add films by National Artists to your list of things to watch! You can catch a rare screening of National Artist for Cinema Manuel Conde’s Krus na Kawayan at the UP Film Institute on October 5. The 1956 film, which was set entirely in Vietnam, tackles the refugee crisis during the Vietnam War. It stars Conde himself and was filmed in two languages: Vietnamese and Filipino.

Watch up-and-coming bands from different parts of the Philippines

Now on its second edition, Cassette Store Day Philippines spotlights more musicians from all over the country, including Tim Äwä from Lucena, Anesthesia from Naga, and bedtime television from Cebu. If you have a few bucks to spare, you can check out cassette tapes (yes, those tapes!) and merchandise from United Cassettes, Treskul Records & Cafe, and CD's Atbp.

Get closer to nature through an art exhibit

E{art}hwork, which is curated by the Philippine Association of Landscape Architects, puts the spotlight on nature as a significant influence and source of materials for the creation of art. It also showcases how artists can encourage preservation of the environment through their pieces. The best thing about it? It's right inside a mall, so you can just drop by after doing a bit of weekend shopping.

Bask in Danish culture by binge-watching their films

Curious about Danish culture? Find out more through Danish films made by the biggest names in the industry, like Carl Theodor Dreyer and Bille August, during the fifth Danish Film Festival. The lineup also includes Filipino-made Nuuk, a psycho-thriller film set in Greenland that features Aga Muhlach and Alice Dixson. All screenings are free on a first-come, first-served basis.

October Free Things To Do Manila Guide
Your Guide to Thriving in This Strange New World
Staying
In? What to watch, what to eat, and where to shop from home
OR
Heading
Out? What you need to know to stay safe when heading out