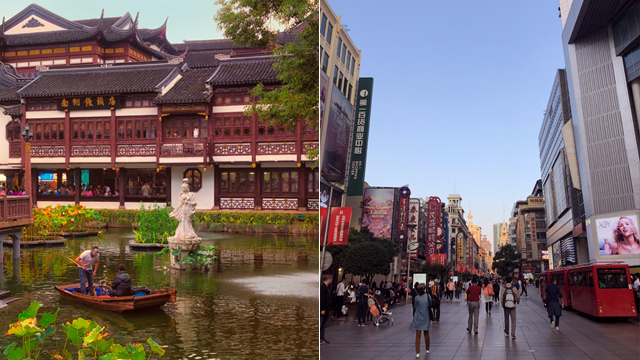 10 Exciting Things to Do in Shanghai

From getting a taste of local cuisine to seeing a former rebel hideaway.

(SPOT.ph) Shanghai is one of the most dynamic cities in China with plenty of tech startups, a rich history (did you know it used to be a fishing village?), and lots of shopping centers. If you’re going to be dropping by soon, here's what you should check out.

We’re giving you 10 things to do in Shanghai, China:

Go sightseeing at The Bund

Amid the bustling city life of Shanghai—cars, people, the constant influx of tourists, and their aggressive economy—The Bund remains bright even at night. Also called Waitan, this place is famous for its scenic views and lights. In the morning, you can find locals working out in the area, and come nighttime, both locals and tourists flock to this place for a glimpse Shanghai’s cosmopolitan beauty. Make sure to walk along the mile-long stretch on the banks of the Huangpu River to catch a glimpse of the city's architectural wonders, from the Broadway Mansions to the Meteorological Signal Tower. Don't miss the stunning mosaic ceiling of the HSBC building.

Revisit your childhood at Shanghai Disneyland

Opened in June 2016, Shanghai Disneyland sprawls across 3.9 square kilometers of land and is considered the largest of the Disneyland parks outside of the U.S. The Pirates of the Caribbean ride features impressive animatronics and projections that make this park particularly worth a visit, according to CNN.

Have a taste of local cuisine

There is a wide variety of food choices across the city at affordable prices, but China is well-known for its duck dishes. Traditional methods are fastidiously followed, especially when it comes to preparing the famed Peking duck, and one of the best places for it is Imperial Treasure Peking Duck in Shenchang Lu. The Michelin-starred restaurant is one of Shanghai's Top 25.

Guan Sheng Yuan Group, the company behind the White Rabbit candy from your childhood, also makes a range of cosmetic products, from hand creams, lotions, and shower gels, to name a few. You can find them at groceries and stores all around the city.

Zoom in on the Shanghai contemporary art scene

For art and museum enthusiasts, Museum of Contemporary Art Shanghai is the place to be. Located within People’s Park in Huangpu, this museum showcases the best of Shanghai contemporary art, ranging from students’ works to more established artists.

Have your fill of personalized chocolate at M&M’s World

M&M’s World is a wonderland for fans of M&M's chocolate. Here, you can find towels, coin purses, stationery, phone cases, candy dispensers, and of course, lots of M&Ms. You can have M&Ms personalized with letters or messages, or you can have your fill of the candy in your favorite color.

Unleash your inner tita/tito at IKEA

While waiting for IKEA's Philippine outpost to open, you can drop by Shanghai's two branches: one in Xuhui, which opened in 1998; and another in Pudong, which opened in 2011. The latter covers 49,400 square meters, making it currently the largest branch in Asia and the second largest IKEA in the world.

Have a different Starbucks experience

Starbucks Roastery Shanghai was considered the world’s largest Starbucks Roastery branch up until the opening of the 32,000-square-foot Tokyo outpost in early 2019. Their biggest store yet is about to open in Chicago on November 15. Apart from in-house roasting, it houses three coffee bars, a special Teavana bar, and an augmented-reality experience for its visitors and locals—just point at key features around the coffee shop to learn more about Starbucks' bean-to-cup story. The Teavana Bar in particular is worth checking out—aside from being the first in China, it has 3D-printed bases for its counters!

Shop till you drop at Nanjing Road

Nanjing Road is a century-old shopping street that used to house traditional stores. Fast forward to 2019, and the street offers more choices for shopaholics—from upscale brands, various department stores, to a slew of specialty shops along its 5.5-kilometer stretch.

Take a stroll in a lush garden

Get your dose of nature in the middle of a busy city at Yuyuan Garden. Climb to the top of the 14-meter Great Rockery, where you can have a bird's eye view of the garden. Then, wander through the pavilions and imagine the lives of the Pan family, which owned the 20,000-square-meter garden during the Ming Dynasty. One of the buildings in the garden was once the meeting place for the secret Small Sword Society, which in 1853, rebelled against corrupt officials and controlled Shanghai for one year.