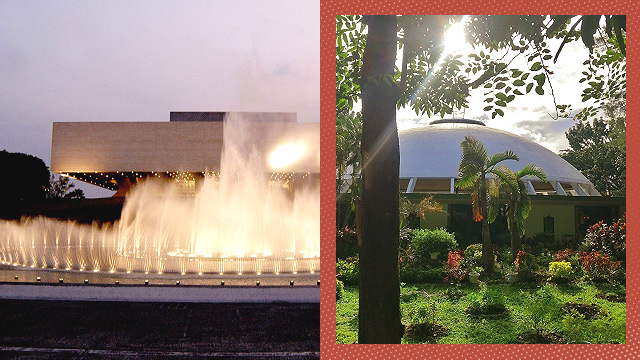 10 Locsin-Designed Buildings That You Can Still Visit

You may have already visited a Locsin-designed building and didn't even know it.

(SPOT.ph) The ongoing petition by PLDT to delist the Ramon Cojuangco Building in Makati City as an important cultural property has again thrust the name of the late National Artist for Architecture Leandro V. Locsin into the spotlight. Locsin’s works that are listed as Important Cultural Properties are protected by law from demolition, and delisting his work enables the owner of the structure to modify or demolish the building.

Mel Patrick Kasingsing, who is editor-in-chief of Kanto.com.ph and co-moderator of social-media account Brutalist Pilipinas, recently shared that even Swiss architect-scholar Jean-Claude Girard, the author of the book Leandro V. Locsin Philippine Architect appealed to the decision of the delisting of the Ramon Cojuangco Building, citing in his letter that “…following 10 years of research and writing on Locsin, was to ensure that his work would be recognized and protected.” Brutalist Pilipinas also sent their own letter of appeal, and as of this writing, a final decision for this property has not been resolved.

Because of this petition and the recent demolition of Locsin’s Mandarin Oriental Manila, along with the closure and uncertain fate of the Folk Arts Theater, we give you a list of Locsin-designed buildings that are still standing, and that you could still see in person. We hope that by visiting these 10 structures, you would have a better appreciation of the National Artist’s works.

Also read: 10 Heritage Sites in Manila That Need Your Attention

Check out these buildings designed by Leandro Locsin the next time you go around the Metro:

Cultural Center of the Philippines

Arguably one of Locsin’s most important works, the Cultural Center of the Philippines (CCP) remains one of the finest examples of Brutalist architecture in the country. Opened in 1969, the center is currently operational, hosting live theatrical performances by Tanghalang Pilipino, important exhibits such as the Thirteen Artists Awards, and shows by Ballet Philippines. The CCP is thankfully being renovated soon, starting with the CCP Little Theater.

Touted as this country’s most iconic Brutalist building, the Philippine International Convention Center (PICC) is not just a mere venue for graduation ceremonies. Aside from its Beton brut finishes, the PICC’s dramatic expanse of space, its play of heavy volume and light-filled areas, the playful chandeliers, and an assortment of National Artists’ works make the building appear imposing and breathtaking at the same time.

Designed by Locsin as a young architect in 1955, this church is also famous for having been worked on by five National Artists: Locsin for the architecture, Vicente Manansala (assisted by Ang Kiukok) who painted the Stations of the Cross murals, Arturo Luz who designed the "River of Life" terrazzo floor, and Napoleon Abueva who sculpted the double-sided crucifix. The groundbreaking church featured a central altar beneath a thin-shell concrete dome supported by a ring beam and radiating columns.

Designed by Locsin in 1978, this sports club complex located next to the exclusive Valle Verde subdivisions in Pasig City was one of the first private member clubs in the area, boasting sports facilities such as basketball, tennis, squash courts, billiards, and archery rooms, a gym, dance studios, a spa, and three swimming pools.

Completed in 1968, this catholic church’s unusual shape continues on the legs of the Parish of the Holy Sacrifice’s circular design. Capping the structure’s butterfly floor plan is an X-shaped cross, a saltire, that replaces the usual steeple cross and symbolizes St. Andrew's crucifixion. The stunning parish has in recent years been gated in, partially obscuring the façade from the street.

The L.V. Locsin Building is a 19-storey office building that is right smack in the intersection of Makati and Ayala Avenues. It faces both Makati Shangri-la and The Peninsula Manila,  and is located very near the Ramon Cojuangco Building. Appropriately enough, it houses the National Artist’s design firm Leandro V. Locsin Partners on the 18th floor. If you want to take a closer look and dine in as well, Chef Colin Mackay’s fine dining restaurant SALA is located in the podium area of the building.

In 1980, Locsin designed the SEARCA Residences Hotel, which was built as lodging facilities for those studying at the Southeast Asian Regional Center for Graduate Study and Research in Agriculture in Los Baños. The latter, on the other hand, was designed by architect Felipe Mendoza. SEARCA Residences Hotel features an airy, double-volume-ceiling lobby, and tastefully decorated guest rooms.

Sitting on the edge of Mount Makiling as part of the National Arts Center in Los Baños, the wall-less, open-air theater topped by a dramatically pitched, bahay kubo-inspired roof serves as both tourist attraction and performance venue for the students and guest artists of the Philippine High School for the Arts.

The airport that was voted one of the "Worst Airports in the World" in 2011—Ninoy Aquino International Airport (NAIA) - Terminal 1—was designed by Locsin in 1981, and it officially opened in 1982. According to the Manila International Airport Authority, it breached its maximum passenger limit of 4.5 million in 1991. When newly built, the sweeping façade and modern coffered ceiling of its departure area were dramatic and striking. Over the years, many internationally-renowned Filipino design firms, including Locsin Partners, proposed designs for the makeover of the airport.

Yes, the hotel with the famed Spiral Buffet and its Manila-sunset-facing swimming pool was designed by the National Artist. The Philippine Plaza, as it was originally called, was built in 1976 as one of several hotels that were rushed in time for the World Bank and International Monetary Fund meetings in the same year during the initial Marcos regime. It underwent a major renovation in 2014 and remains one of the most popular five-star hotels in Metro Manila.