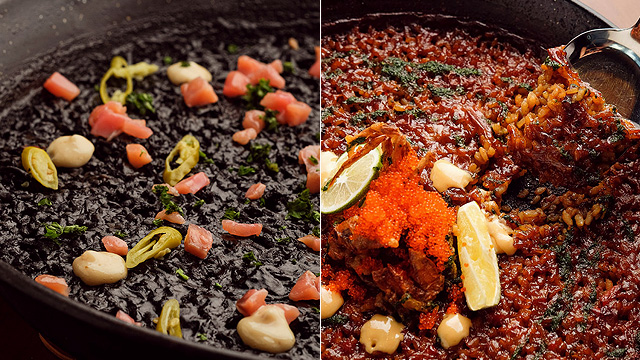 10 Great Places for Paella in Manila

The tastiest Valenciana, Negra, and more in the city!

(SPOT.ph) It doesn’t get any more celebratory than paella—the quintessential Spanish dish, originating from Valencia, made with rice cooked with flavored stock in a paellera (from which the dish gets its name) and topped with various meats, seafood, and/or vegetables. Much of its appeal lies not only in its festive presentation (it’s typically served straight from the pan, with the meats and vegetables painstakingly arranged on top), but also in how it highlights one of our favorite carbohydrates—rice—given a deep complexity from having absorbed the flavors of all the other ingredients. Paella goes for a dime a dozen in this rice-loving country, but when you’re spoilt for choice, you can’t go wrong with any of these 10 establishments.

Here are 10 great places for paella in Manila:

We’ve proclaimed it before, and we’ll proclaim it again: Mijo’s Lamb Paella (P1,550) is your next reason to head to Poblacion, and we mean it. Not only does it come topped with a lamb rack arranged in a crown-like form; it’s also got homemade lamb sausages and heady Moroccan spices that perfume the whole mix. If the flavors of the sea are more your jam, they also make a mean Soft Shell Crab Paella (P1,100) with crispy soft-shell crab, aligue, tinta, and aioli.

This deli-turned-bistro carries a selection of paella that’s short, but sweet, and made with high-quality ingredients—many of which they also sell in the store. Seafood lovers can go for Terry's Seafood Paella (P720), with tuna belly, pulpo, shrimps, Visayan clams, and stuffed baby squid on top of Valencia rice. There's also the Super Paella Parellada (P1,380), said to be an original recipe from Siete Puertas Restaurant in Barcelona, and which has a saffron-rice base topped with squid, pork, chicken, butifarra, and Spanish chorizo. Their Black Paella (P1,380) is also a standout, coming flavorful with rice cooked in a squid ink-seafood-vegetable broth just until soft but not mushy. Shrimp, squid, and clams on top further bring out its briny, seafood-y flavor, which is then balanced with the garlicky aioli on the side.

This BGC establishment has more than just great tapas and sangria. They make a stellar take on Paella Negra (P1,110), which arrives jet-black and glistening against its paellera, topped with baby squid and octopus. Also worth a spot on your table is their Paella de Pollo, Cerdo Iberico y Chistorra (P630), which has the simple-but-stellar combination of chicken, pork, and chistorra, a type of cured pork sausage.

With 15 varieties of paella on the menu, you won’t run out of choices at this 67-year old Spanish establishment. There’s the classic Paella Valenciana (P580) and Paella Negra (P650) of course, but those looking to step out of their comfort zone would be well to try the Paella de Cangrejos with crabmeat (P650), Paella Verde with green vegetables (P550), or Paella Filipino with sisig and cochinillo a.k.a. suckling pig (P580)—all of which have soft and moist rice and the highly coveted layer of socarrat on the bottom.

This relative newcomer brings the festive colors and flavors of San Sebastian to Poblacion, offering five kinds of paella all made with bomba rice. It doesn’t get any more festive than their Paella de Pato, which has a poultry-forward combo of duck breast, foie gras, and mushrooms. But it’s their Paella Negra (P925), with squid ink, gravlax, and pickled piparra peppers (try saying that 10x fast), that’s really cemented its place in our hearts—and stomachs.

La Picara is one of the few Spanish restaurants that isn’t quite a fancy tapas bar nor a mega-traditional casa, but they manage to pull off their in-betweenness with well-thought out twists on classics. Their paella—dubbed “Thug Paellas” on their menu, we kid you not—are as irreverent as they ingenious: think Paella Negra (P940) with clams and lapu-lapu in salsa verde, Fideua de Cochino (P980) with pork knuckle and braised pork ribs, and—our top pick—the Chili Crab Paella (P890) with soft-shell crab tempura and tons of crispy socarrat on the bottom.

Two words: Paella. Cochinillo. The best of the carbohydrate and protein worlds collide in this modern Spanish joint’s deadly creation. Another one-of-a-kind, why-didn’t-I-think-of-that type dish here is the Paella Pulpo, which comes with a coiled-up tentacle of meaty octopus at the center. Las Flores does not shy away from adding their own twists to classics, as in the addition of katsuobushi flakes in their Paella Negra (squid paella, P795).

Apart from their winning tapas and Slow-Roasted U.S. Beef Belly, this J. Gamboa-helmed, classic Spanish resto offers four kinds of paella that’d make great additions to any lunch or dinner table. A standout from the selection is the Paella Montaña (P1,195), which has an earthy combination of portobello mushrooms, whole roasted garlic, asparagus, and aromatic truffle oil. Those in for a more classic bite would be well to try their signature Paella Cirkulo (P1,195), which has saffron, duck, pork, chorizo, sweet peppers, and asparagus.

As one of the oldest Spanish restaurants in Manila, classics reign supreme at Casa Armas. And this extends to their paella selection—there’s Valenciana (P679/small, P1,179/large), Marinara (P759/small, P1,289/large), and Negra (P739/small, P1,229/large), all of which boast well-cooked rice and a distinct layer of socarrat. Vegetarians need not miss out on the paella action here, either, as they offer a Verdura variant (P539/small, P889/large) that highlights the earthiness of veggies.