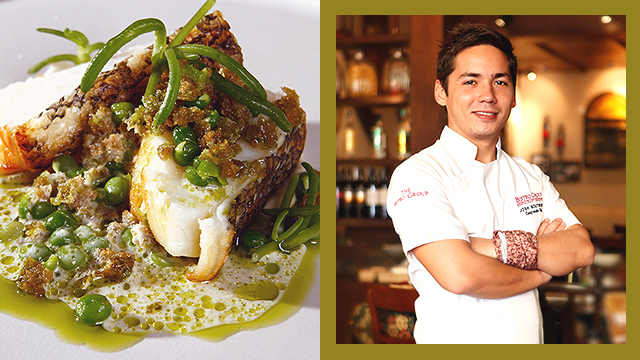 The 34-year-old chef is known for his playful takes on food.

(SPOT.ph) It's always worth celebrating when chefs in the Metro gain recognition—after all, it only underscores the fact that we've got great culinary geniuses in this side of the world. Here's some good news: Chef Josh Boutwood of Helm, The Test Kitchen, Savage, and Chowciao has been included in international restaurant guide La Liste's 2021 awards—specifically, as one of their Young Talents of the Year.

La Liste notes how Boutwood "juggles constant innovation" at his restaurants The Test Kitchen, Savage, and Helm, as well as "his job as executive chef at The Bistro Group" where he manages 130 restaurants in the country. As the 34-year-old chef reopened The Test Kitchen in 2019, he went from doing strictly tasting menu to including ala carte options, but—in La Liste's words—"maintaining the same level of artistry."

The Filipino-British chef grew up at his parents' restaurants in England and Spain, eventually taking up formal culinary education at Spain’s Escuela de Culinario Mojacar cooking school. He has a wide range of culinary milestones under his belt—including apprenticeship for Chef Raymond Blanc at Le Manoir aux Quat’ Saisons in Oxford, as well as working for award-winning Copenhagen restaurant Noma. He came to our shores in 2010, opening Alchemy in Boracay and eventually being appointed corporate chef of The Bistro Group. (He also ranked first in our Top 10 Hottest Chefs in Manila list in 2015, JSYK.)

La Liste is a restaurant ranking and guide founded by former French diplomat Philippe Faure, which annually lists the best restaurants around the world by gathering existing guides and lists by media publications, opinions by chefs, and online customer reviews. This year, however, they've switched from their usual restaurant ranking to a set of special awards that put the spotlight on the "commitment and hard work" of those who've been "able to adapt and innovate during the 2020 crisis, to build the gastronomy of tomorrow."

Josh Boutwood Chef Food News La Liste Savvy Seasoned Tpc-000001 Staying In Awards
Your Guide to Thriving in This Strange New World
Staying
In? What to watch, what to eat, and where to shop from home
OR
Heading
Out? What you need to know to stay safe when heading out