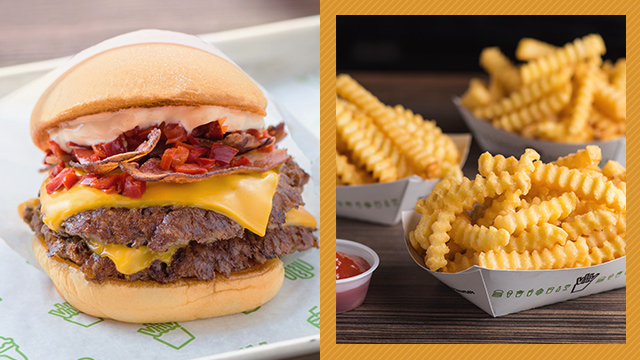 The 10 Most Popular Items on Shake Shack Philippines' Menu

According to intel straight from Shake Shack. Think your go-to is on the list?

(SPOT.ph) Burgers rank high as one of the best-loved eats here in the Philippines, and Filipino fans rejoiced when Shake Shack announced they were opening in Manila in 2019. After all, it's practically an institution in the U.S., where it’s well-known for satisfyingly tasty hot dogs, burgers, shakes, and frozen custard.

Shake Shack started out in 2001 as a hot dog cart by Chef Danny Meyer in Madison Square Park, Manhattan. The cart was established to help revive the then-declining park. Scores of loyal fans and a menu expansion later, it's still there, with people from all over the world lining up daily for a ShackBurger or two.

Shake Shack now has over 100 locations internationally—including three in the Philippines—so we asked them about the most-ordered items on the menu. Can you guess which ones made the list?

Also read: The 10 Most Popular Dishes at Wildflour

These are the best-selling items on the Shake Shack menu in the Philippines:

Whether you’re a first-timer at Shake Shack or you order from there every single week, you can’t go wrong with the ShackBurger (P250). This is their take on a basic cheeseburger, but don’t let the “basic” part fool you—it’s an excellent take on the classic with juicy meat, fresh and crisp lettuce and tomatoes, and a lightly-tangy ShackSauce to tie everything together. It ranked second on our 2019 Top 10 Cheeseburgers in Manila list and remains one of our ultimate faves to this day.

The ShackBurger is great as it is—but if you’re looking for an even meatier experience, the Double ShackBurger (P410) is your best bet. It’s got twice the amount of Shake Shack’s succulent beef patties and cheese, giving you twice the savory and juicy goodness in each bite.

How can you go wrong with the winning combo of cheese plus carbs? Shake Shack’s Cheese Fries (P180) immediately comes to mind when the hankering hits. It’s got their crinkle-cut fries drenched in their golden cheese sauce, adding a creamy, umami contrast to the crispiness of the fries.

Even in their stripped-down state, Shake Shack’s Fries (P130) are a star. They’re of the crinkle-cut form, and the increased surface area makes for a crispier feel. As you sink your teeth into the crisp exterior, you’re met with a soft and fluffy interior that’s seasoned just right, making it a perfect pair to their flavorful burgers.

Introduced to the Philippine menu in June of 2020, the Chick’n Shack (P250) has quickly risen to become one of the burger shop’s top sellers—it’s actually third on our list of the Top 10 Tastiest, Crunchiest Fried Chicken Sandwiches in Manila. And why not? With a fried chicken breast that’s crispy and crackly (and stays that way even when ordered for delivery!), lettuce for freshness, tangy pickles, and creamy buttermilk-herb mayo in a pillowy-soft bun, you get a balanced medley of tastes and textures in every sandwich.

Raise your hands if you like it spiced and smoky. You’ll love the SmokeShack (P365)—basically the ShackBurger with the roadhouse factor turned up, thanks to the addition of slightly-crisp applewood smoked bacon and chopped cherry peppers for a touch of heat. Balancing these more robust-tasting factors is Shake Shack’s ShackSauce, which contributes a welcome tangy-creamy profile.

More is more in the Shack Stack (P545), a thicc and glorious sandwich that fuses two of Shake Shack's other bestsellers: the ShackBurger and the 'Shroom Burger. It’s got the cheeseburger base of the former and the crispy, cheese-filled portobello mushroom patty of the latter, making for a juicy, meaty, crisp, and cheesy whole that’s more than the sum of its parts.

Shake Shack’s strength isn’t limited to its meaty entries; try the ’Shroom Burger (P445) and you’ll see what we mean. This vegetarian number showcases Shake Shack’s signature brand of indulgence, with a crisp-on-the-outside, juicy-on-the-inside portobello mushroom patty that’s filled with melted muenster and cheddar cheeses. With crisp lettuce, juicy tomatoes, and their ShackSauce joining in the fun, it’s all a hefty, gooey party in the mouth that’ll have you on a ‘shroomy high.

As you can tell from the name, Shake Shack is also known for their hand-spun shakes that are made with their own frozen custard. These come in a couple of flavors, but the Ube (P190) takes the cake… er, shake. It’s a Manila Exclusive, for starters, meaning you can only get it here in the Metro—but also, you can’t go wrong with the combo of nutty purple yam and their lush vanilla frozen custard, which come together for smooth, creamy sips.

Made for true-blue carnivores, the Double SmokeShack (P525) takes the SmokeShack—a.k.a. Shake Shack’s cheeseburger plus applewood-smoked bacon and chopped cherry peppers—and doubles the beef patty and cheese for a truly explosive experience. If you’re looking to Indulge with a capital I, this is the one for you.