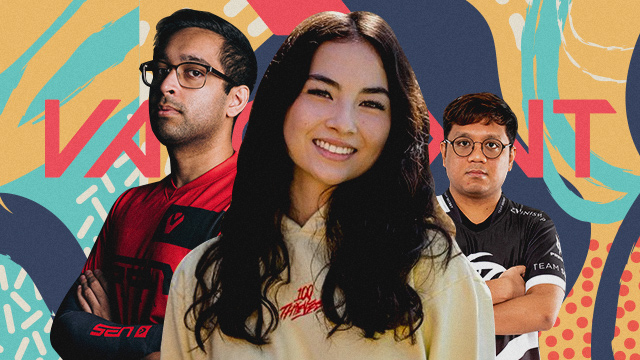 Try to guess which Stranger Things actress is a VALORANT streamer.

(SPOT.ph) In case you've been off the internet for the better part of the last two years, VALORANT emerged in 2020 and quickly became one of the most popular first-person shooters and esports games not just in the Philippines, but in the whole world. As a result, there are plenty of cool peeps on the Internet who livestream themselves playing VALORANT that are worth watching on the regular; for your daily dose of good gamer vibes or if you want to know what the buzz is all about.

People may wonder why it's worth investing your time watching other people play games, when you can just use your free time to play the game yourself. However, these content creators and esports athletes have proven that gaming livestreams are just as important as sporting events that are aired live—like what the NBA, PBA, F1, and the different football leagues do—when it comes to entertainment and nurturing young gamers to pursue their passion as well.

We'll just note that the platform where these streamers are primarily live on, Twitch, is free, so there's no drawback to setting up an account—other than maybe your time and ability to go outside and touch grass.

Also read: ESports Games Are a Big Thing Right Now and Here's Why

First on the list is 100 Thieves content creator, Kyedaye Shymko. The 20-year-old streamer for Canada has following of 1.6 million on the Twitch platform and is considered one of the more popular VALORANT personalities, due to fun streams where she plays with different Agents (the game's characters) and guns. Plus, she's got an influencer following outside the world of the game.

She's also set to come to Manila at the SMX Convention Center in Pasay in July, for the CONQuest gaming and pop culture festival.

It'd be impressive that a 21-year-old is considered to be one of the top players of any game, but TenZ makes it look easy. A former Counter-Strike: Global Offensive (CS GO) player, TenZ is an esports player for the organization Sentinels. Competing for Sentinels, TenZ has placed first (alongside teammates such as ShahZaM and Zombs) at a number of VALORANT Champions Tour (VCT) tournaments in 2021, including the VALORANT Masters Reykjavík 2021 tournament, where they faced off against players from all around the world and emerged at first place. Aside from obviously being a skilled gamer, TenZ also provides quality and educational entertainment on his Youtube channel.

At the competitive rank of Radiant (the highest rank in VALORANT), tarik is one of the Twitch streamers you should be watching if you want to get more into the game. As a former pro-player, he has a unique and specific understanding of the game, which he shares with his audience in an insightful manner that isn't difficult to digest, even for beginners. He comments over the tournaments when they're live and he showcases entertaining content geared towards his audience when he does stream himself playing.

DubsteP is an esports player on the Filipino VALORANT team of esports organization TeamSecret. They recently came out on top of the VALORANT Challengers Philippines tournament held last May and will proceed to compete at the APAC Challengers ongoing this June. If you want to watch a fellow Pinoy go hard with snipers on Jett and Chamber, or as an aggressive duelist, then keep your eye on DubsteP on the competitive level this month.

A relatively new addition to the streamer pool of VALORANT, Grace Van Dien goes by BlueFille on Twitch, but you may know her as Chrissy the cheer captain from the latest season of Stranger Things. Spoilers, but Chrissy's neck isn't the only thing that's cracked, as BlueFille herself is quite cracked herself as a Viper main in game. She mostly just plays for chill and literal laid-back vibes, though.

The Sentinels boys are just the streamers you have to have on your radar when looking at VALORANT content. For this pick, we have ShahZaM, the IGL (in-game leader) of Sentinel's pro team for the game, who is considered by many to be the best IGL in North America. Whether he's playing Initiators in compet to prioritize aiding his team or playing around with snipers as Jett in unrated games, ShahZam is definitely one to watch.

Formerly a pro player for TSM, Wardell is the most "Jett main" player you'll find on this list, meaning, oh yes, he's definitely aggressive. He's also up there as one of the best Operator/sniper players in the game, which makes his maining Jett (and also playing Chamber) even more deadly. If you want to get better with those clean Operator one-shots, or as a confidently aggressive player in general, definitely take some notes from Wardell.

The 31-year-old streamer Hiko is practically a veteran of the esports gaming scene by now, with expansive experience in CS GO before getting onto VALORANT, but he still provides energetic and hilarious gaming content that's on the same level as "the kids these days" (a.k.a. the other people on this list). He recently retired from the pro gaming scene to focus more on streaming and content creation, so expect some entertaining new drops from him.

A "headshot god" from CS GO, ScreaM is a Belgian pro player for the organization Team Liquid.  With Liquid, ScreaM and his team went on to place 3rd-4th place at the VALORANT Champions Tour, the official and biggest tournament for the game, held in 2021. No doubt one of the best players in the world, he's also plays calm and with a steady hand as he rocks aggressive Duelists such as Raze and Reyna.

Boaster is the tactical and strategic mind behind the organization FNATIC's pro VALORANT team. This certainly reflects in his content and streams as well, as he shows a lot of educational commentary and guides on how to get proficient at the game. He typically plays the support role for his team, with agents like KAY-O, Breach, and Viper. His game is only getting better with the newest agent Fade, so if you're also trying to get proficient with her, Boaster will prove to be an insightful watch.

Also read: WATCH: Who are our esports medalists in the SEA Games?