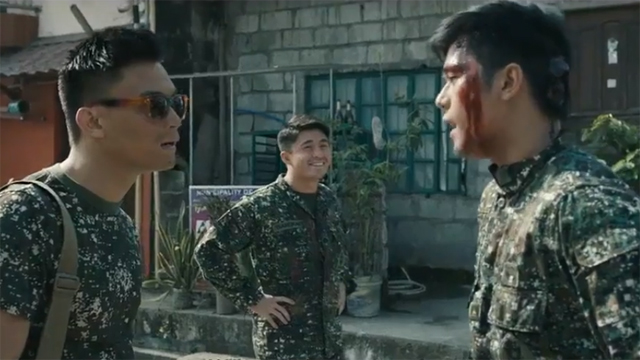 Rod Marmol's Mata Tapang was an entry to the CineFilipino Film Festival.

(SPOT.ph) There's no shortage of good local films for you to watch these days, be it a romantic comedy like I'm Drunk, I Love You, or a historical film like Heneral Luna. You can count on Filipino filmmakers to be as creative and inventive as they can be with their plots, and some of them (Dead Kids, anyone?) may sound bizarre on paper, but actually work on-screen. This month, you can see for yourself: writer-director Rod Marmol's Mata Tapang, a film about a blind sergeant opening his third eye, will screen from July 14 to 26 at Cinema Centenario.

Luis (Edgar Allan Guzman), or Sergeant Hardrock, loses three of his comrades in battle, along with his left eye. As he recovers from surgery, he begins to see his fallen brothers and tries to convince himself that they're merely hallucinations resulting from his medication. Eventually, he believes them and starts to give in to their requests in an effort to help them gain closure and cross over to the afterlife. But secrets start to unravel and Sergeant Hardrock isn't sure if he can handle the truth.

The film was an official entry to the CineFilipino Film Festival 2018. Check the schedule below.

Tickets are priced at P200 per screening, but students can present their ID and get the tickets at the discounted price of P150 from Monday to Thursday.

Rod Marmol Cinema Centenario Mata Tapang
Your Guide to Thriving in This Strange New World
Staying
In? What to watch, what to eat, and where to shop from home
OR
Heading
Out? What you need to know to stay safe when heading out