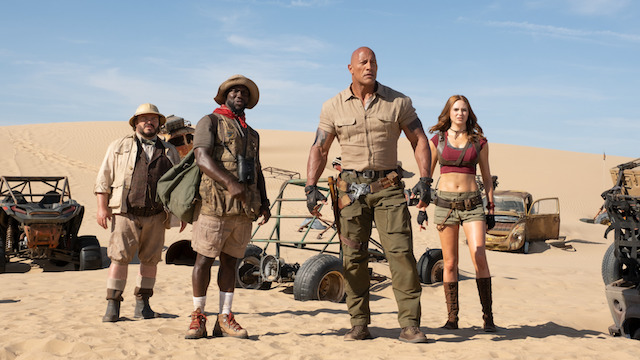 (SPOT.ph) We’re finally at the end of 2019! Before you start reminiscing about your year or start writing resolutions for 2020, head to the cinema (or the couch) to check out our picks of new movies this December. There’s something for everyone this month, from the last installment of the Skywalker saga, a dramatic portrayal of a marriage falling apart, and of course, the Metro Manila Film Festival.

Here are 10 exciting movies you need to watch this December:

Jumanji: The Next Level

Release date: December 4
Following 2017’s hit remake comes another adventure into the video-game world of Jumanji. Another set of kids somehow fall into the game and must complete a new quest to escape. Dwayne Johnson, Kevin Hart, Karen Gillan, and Jack Black all reprise their roles, this time alongside Awkwafina, Danny Glover, and Danny DeVito.

Release date: December 6
Netflix continues to be home to some of the most exciting films this award season. Next up on the streaming service’s roster is the critically acclaimed drama, Marriage Story. Written and directed by Noah Baumbach, the story follows the heartbreaking marriage of Charlie (Adam Driver) and Nicole (Scarlett Johansson).

Release date: December 11
Written, produced, and directed by Edward Norton (who also stars as the lead), Motherless Brooklyn is a neo-noir crime drama about Lionel Essrog, a lonely private detective with Tourette’s syndrome. With nothing but a few clues, he sets out to solve the murder of his only friend and uncovers a dangerous web of secrets.

Release date: December 13
Gear for some edge-of-your-seat action and explosions courtesy of Michael Bay and Netflix. Ryan Reynolds stars as One, a mysterious billionaire who recruits six individuals, each with a unique skill, to form a vigilante squad and save the world. Not much is known of 6 Underground yet, but if the trailer is anything to go by, expect plenty of heart-stopping fun in scenic places around the world, including Florence, Italy!

Star Wars: The Rise of Skywalker

The epic Skywalker saga comes to an end with the ninth Star Wars film that’s coming to local theaters for a limited time this December. (And if you happen to miss it this year, don’t worry; it’ll be back after the Metro Manila Film Festival.) Directed and co-written by J.J. Abrams, the final episode is set a year after the events of The Last Jedi. And while the remaining forces of the Resistance are still reeling, they must face off with the First Order once again. Carrie Fisher, Mark Hamill, Adam Driver, Daisy Ridley, John Boyega, Oscar Isaac, Anthony Daniels, and more reprise their roles.

Release date: December 20
Despite their opposing views, Pope Benedict XIV (Anthony Hopkins) must find common ground with Cardinal Jorge Bergoglio (Jonathan Pryce), a.k.a. the future Pope Francis must find common ground in order to forge a new path for the Catholic Church. Netflix’s biopic is written by The Theory of Everything’s Anthony McCarten and directed by Fernando Mereilles.

Release date: December 25
TBA Studios joins the Metro Manila Film Festival (MMFF) with this charming and intriguing romance film. Miles Ocampo plays an aspiring writer who dreams of writing about a great romance, despite not having experienced it herself, while Rocco Nacino is a seasoned and immensely jaded writer. When the two are forced to write a screenplay for the next big blockbuster, they must set aside their differences and find out what love really means for the both of them.

Release date: December 25
Written by Ricky Lee and directed by Alvin Yapan, this MMFF entry depicts the pain and suffering of Filipinos afflicted with leprosy during the '40s. After being ostracized by society, they are legally exiled and quarantined in the distant northernmost part of Palawan, where they are left to die from a disease that’s incurable at the time. It stars Iza Calzado, Jasmine Curtis-Smith, and Meryll Soriano.

Release date: December 25
Is it really the MMFF if we don’t get at least one horror movie in the mix? This year, it’s Ten17P Studio’s Sunod, a suspenseful flick produced by Paul Soriano and directed by Carlo Ledesma. It follows Carmina Villaroel, a struggling call center agent who’s at the center of a mysterious force that won’t seem to stop following her.