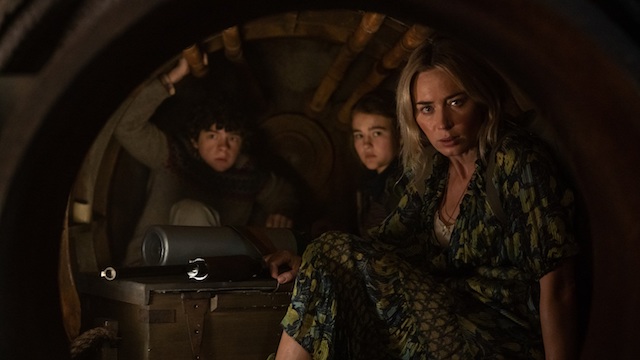 (SPOT.ph) You’re in for a thrilling movie-watching time this month, as March is filled with nail-biting action and heart-stopping scares that will have you at the edge of your seat! Get your fill of a new live-action adaptation from Disney, try not to make a sound with the sequel to A Quiet Place, navigate the criminal underworld of Boston, and more.

Here are the 10 must-see movies this March:

If you’ve been on the Internet long enough, then you’ve probably heard of the Daniel Radcliffe meme where he’s holding two guns. Now we finally know the context of the photo: it’s for a new action film called Guns Akimbo, where he plays Miles, who unwittingly gets caught in a dangerous real-life game from the dark web that forces strangers to fight to the death—literally. He suddenly wakes up with two guns bolted to his hands and he must find a way to survive the game.

Disney-Pixar’s latest animated offering takes you to a modern yet mythical world of elves, pixies, and more. Two teenage elves, Ian (Tom Holland) and Barley (Chris Pratt) embark on a magical quest to find a way to resurrect their late father for a day. The film also features the voice talents of Julia Louis-Dreyfuss, Octavia Spencer, Ali Wong, and more.

Not to be mistaken with the 2003 widely derided cult film of the same name, this French horror film centers on a married couple (Olga Kurylenko and Kevin Janssen), who moves to a huge, secluded mansion away from the city. While repairing their house, they discover a mysterious room that can literally give them anything they wish for. Things escalate when they decide to wish for a child.

In this Filipino horror flick, JC Santos plays JC, who is forced to take over the family business: A secluded motel that provides shelter to illegal immigrants. He and his guests soon discover, however, that the motel houses a dark and ancient spirit that devours men and impregnates women. Even worse, food is running out and a violent blizzard keeps them trapped within the hotel’s walls.

Netflix’s drama-slash-mystery movie stars Amy Ryan as Mari, a desperate mother who relentlessly searches for her missing daughter. In her search, she stumbles upon a series of unsolved murders of young sex workers and resolves to uncover the truth. The movie originally premiered at the Sundance Film Festival in January, and will stream on the service this March 13.

Get excited because the sequel to the hit horror flick, A Quiet Place, is finally here! Both John Krasinski and Emily Blunt reprise their roles (though writer and director Krasinski’s deceased character appears in flashbacks). Once again, the family must try to survive a deadly apocalypse where monsters kill anything that makes a sound. Forced to venture into the outside world, they soon realize that the monsters they fear aren’t alone and there’s more threats that lurk. Cillian Murphy and Djimon Honsou join the cast.

It’s been a rocky journey for Disney’s live-action adaptation of the 1998 animated film of the same name. After lead actress Liu Yifei was widely criticized for her support towards the Hong Kong police force during the 2019 Hong Kong anti-extradition protests, the film received backlash once again when Captain Li Shang’s character was reportedly dropped “in response to the Me Too movement.” Against all odds, the film is still headed to theaters, with director Niki Caro and a cast that includes Donnie Yen, Jason Scott Lee, Gong Li, Jet Li, and others.

Although originally released in 2018, this brutal Mexican horror is now hitting local cinemas this March. A special agent (Joaquin Cosio) is tasked to lead an investigation of a massacre at a public school on the border of Mexico and the United States. He soon uncovers that the deaths are somehow linked to the rise of an ancient demon called Belzebuth.

From LOST creator Damon Lindelof comes a new horror-thriller centering on a group of 12 strangers who mysteriously awaken in the middle of a clearing, without knowing how or why they got there. They eventually find out that they’ve been chosen by a group of ruthless elitists that hunt humans for sport. The cast includes Betty Gilpin, Emma Roberts, Hilary Swank, Glenn Howerton, and more.

Movies Guide Savvy Seasoned Adventurer Con-00263 A Quiet Place Part II Guns Akimbo The Hunt Belzebuth Mulan Lost Girls Motel Acacia The Room Spenser Confidential Onward
Your Guide to Thriving in This Strange New World
Staying
In? What to watch, what to eat, and where to shop from home
OR
Heading
Out? What you need to know to stay safe when heading out