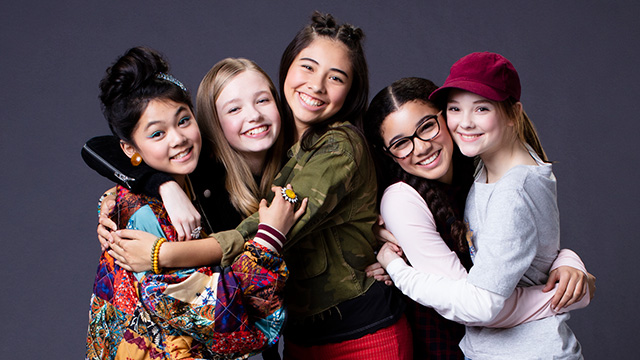 The Baby-Sitters Club Is Getting a Series Reboot on Netflix

(SPOT.ph) With everything that's been happening in the Metro lately, it could do you some good to take a breather. Here's something fans of the OG young-adult book series The Baby-Sitters Club could look forward to: there will be a reboot over at Netflix and the new girls look absolutely sweet in the show's key art.

The series of books follows a middle-school squad of gals who start their own babysitting business in the fictional town of Stoneybrook, Connecticut, all the while navigating adolscence, friendship, and growing up. The 2020 version of the club will include Sophie Grace as club president and softball player Kristy Thomas, Momona Tamada (who plays the young Lara Jean!) as the quirky vice president Claudia Kishi, Malia Baker as organized secretary Mary Anne Spier, Shay Rudolph as math whiz and club treasurer Stacey McGill, and Xochitl Gomez as California girl Dawn Schafer, the club's newest member.

Check out the girls in full character:

Clueless actress Alicia Silverstone will also be part of the series as Elizabeth Thomas-Brewer, a single-mother to Kristy and love interest to Watson Brewer, played by Mark Feuerstein. A group of women will also be at the helm of the show, as book author Ann M. Martin is onboard as producer, along with GLOW's Rachel Shukert as showrunner and Broad City's Lucia Aniello as executive producer and director. This is the third live-action adaptation of the books, following the 1990 HBO TV series and the 1995 film directed by Melanie Mayron.

There's no release date for the series just yet, but it is set to hit the streaming platform soon.

Baby Sitters Club Netflix Sophia Grace Momona Tamada Malia Baker Shay Rudolph Xochitl Gomez Adventurer Savvy Seasoned
Your Guide to Thriving in This Strange New World
Staying
In? What to watch, what to eat, and where to shop from home
OR
Heading
Out? What you need to know to stay safe when heading out