Kathryn Bernardo and Daniel Padilla Outtakes for The Hows of Us
Loading
Already a member? Log in
No account yet? Create Account
Spot.ph is your one-stop urban lifestyle guide to the best of Manila. 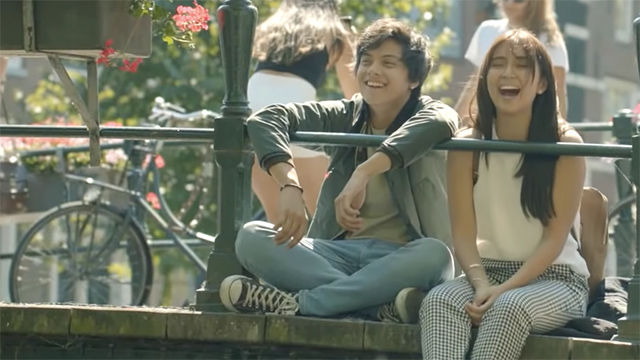 With a load of cute behind-the-scenes footage, too!

(SPOT.ph) Pinoy romance films are known for intense confrontation scenes and swoon-worthy lines, but behind the perfect take are several bad ones that didn't quite make the cut. Love-team partners and real-life couple Kathryn Bernardo and Daniel Padilla (or KathNiel) have been throwing lines and shooting sequences together since 2011, but they still have their fair share of laughs and mistakes behind the scenes. Star Cinema just dropped never-before-seen bloopers for their 2018 film The Hows of Us and it shows the acting duo's funny side when the cameras aren't rolling.

Bernardo plays George, an achiever who wants to be a doctor, and Padilla plays Primo, an aspiring musician. The film tackles the challenges they face while being  in a long-term relationship, and serves as a reality check for couples that fell in love too early, but must now face the trials of adulthood. It's a pretty serious flick, but the bloopers will make you think otherwise.

The whole video is a treasure trove of hilarious moments on set courtesy of the whole cast and crew, but one situation that happens a whole lot is Padilla forgetting lyrics. Primo's cool and charismatic image on stage falls apart every time Padilla blanks out and yells "Nakalimutan ko!" while laughing. He even pokes fun at director Cathy Garcia-Molina by calling her "Rekdi"—an iteration of "Direk"—as he requests to do another take.

KathNiel fans would know how pivotal doorway conversations are in the film. They happen throughout the film, and it’s the last one that shows Primo and George hitting their breaking point. The scene is almost perfect, until Bernardo freaks out right before the scene reaches its conclusion. The reason? Garcia-Molina crouched by her feet and tickling her ankle. "Akala ko ipis!" Bernardo screams out and honestly, anyone would panic and break character at the thought of a cockroach just crawling around.

No spoilers here if you haven't seen it, but do know that Padilla has a shirtless scene that involves Bernardo staring. She's instructed to ogle, but she doesn't stop after hearing "Cut!" Flustered and embarrassed, Bernardo finally looks away and says sorry. She doesn't get off easy though, as Padilla makes sure to tease her for it after!

Kathryn Bernardo Daniel Padilla Kathniel The Hows Of Us Bloopers Behind The Scenes Adventurer Savvy
Your Guide to Thriving in This Strange New World
Staying
In? What to watch, what to eat, and where to shop from home
OR
Heading
Out? What you need to know to stay safe when heading out