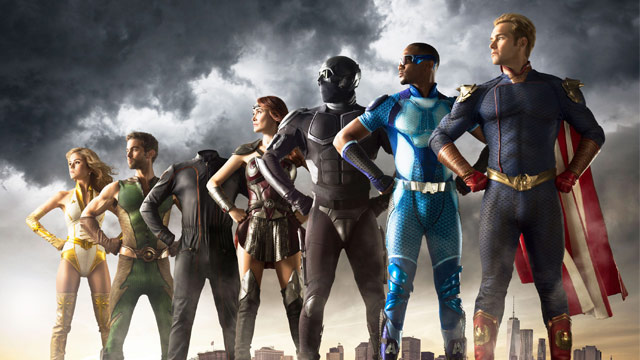 The Boys, Flower of Evil + More: What We're Watching This Weekend

The Haunting of Bly Manor

"I got curious with The Haunting of Bly Manor when we ran a feature on it, in which creator Mike Flanagan described this installment as 'a love story. It's a gothic romance story.' I could imagine that this series would go beyond the usual scare tactics. Add to that getting to read great reviews on The Haunting on Hill House from the comments in the Bly Manor trailer and ratings on IMDB. I've been looking for a new series to start and think I found the anthology that would keep me hooked for a while!"—MM

The Phantom of the Opera at the Royal Albert Hall

Where to watch: The Shows Must Go On YouTube channel

"I miss the days when weekends would be spent watching a play or musical in an actual theater, even if it's all the way in the south like Solaire in Parañaque or all the way in the north like Arts Above along West Avenue. But this will do for now: Andrew Lloyd Webber's The Phantom of the Opera, which was filmed in 2011 at the Royal Albert Hall in London, is streaming for free on October 10, 2 a.m. on The Shows Must Go On's YouTube channel. It's online for 48 hours." —Christa

"I generally don't like watching shows that release their episodes on a weekly basis but Flower of Evil, when it first came out, was an exception. The way the K-Drama was written really had me on the edge of my seat and got me counting down the days till the next episode, which is good—it's always nice to have something to look forward to especially these days! If you like anything that's crime-thriller, you'll absolutely love the story that unravels between Cha Ji Won (Moon Chae Won), a detective, and Baek Hee Song (Lee Joon Gi), her husband, who is hiding his dark past and living under someone else's identity. It's like a rollercoaster—one day, you know who the bad guy is and you feel like you've got it all figured out, and then suddenly, you're not sure anymore. This goes on for about 10 times throughout the entire series. Lucky for you, the show recently ended, so you get to watch the whole thing without having to wait a week to see what happens next! Also, mad props to Joon Gi's stellar acting chops—you'll know what I mean when you watch it." —Jamie

"I haven’t seen Click since it was released in cinemas in the mid-2000s. I recently saw someone mention the film on a Facebook post and I decided to rewatch it. It holds a mystical place in my memory where I remember it as a near-perfect movie that my 10-year-old self enjoyed from start to finish. Equal parts funny and touching, the film follows Adam Sandler (arguably one of his best roles) as architect Michael Newman who is given a "universal remote control" that can bend time and space by the angel of death Morty (Christopher Walken). Throughout the film, Michael skips forward and backward between moments in his life, learning important lessons about his closest relationships, the weight of his decisions, and the consequences of playing god. If you’ve seen the movie before, I think it would be interesting to see how well the film has aged since its original release. And if you’ve never seen it, grab some popcorn, sit back, and get ready to enjoy a 2000s cult classic!" —Ashley

Where to watch: Prime Video

"I was skeptical when I heard about this Amazon Original—another superhero show? Really? But this show turns the superhero trope on its head in a way that's pretty easy to get hooked on: the heroes are clearly meant to be ridiculous, terrible versions of the characters we all know and love from DC and Marvel, and you'll want to see how each one's story plays out. Every episode is a campy hour away from the everyday weirdness of actual life these days, and it's fun to just go along for the ride."—Jo

Where to watch: Daang Dokyu

"It is going to take emotional fortitude, that's for sure, but the opportunity to watch this critically acclaimed documentary isn't something anybody should pass on. I've been seeing Aswang floating around online for some time now so I was happy to hear that Daang Dokyu is streaming it again for free until October 15! The more experimental documentary blends the stories we grew up to of the mythical aswang with the very real terrors people face amid the current administration's 'war on drugs.' No doubt it's going to be every bit as brutal as one would expect, so I'm bookmarking it for the weekend to give it time to sink in."—Mia

"I'll be honest: I was initially attracted to this anime series because of its soundtrack (the opening theme is done by one of my favorite Japanese groups, Ali Project) and visuals. But the plot is real intriguing, too: it takes place in this town called Yomiyama, where a student passed away in 1972. Years after that, 15-year-old Kouichi Sakakibara enrolls at the same school, and notices all his classmates all seem to be afraid of something. He also finds himself being attracted to Mei Masaki, a strange but beautiful girl who he soon realizes only he can see. I'm a sucker for a good mystery, and I feel like this is one of those shows that'll keep pulling you in episode by episode."—Trish