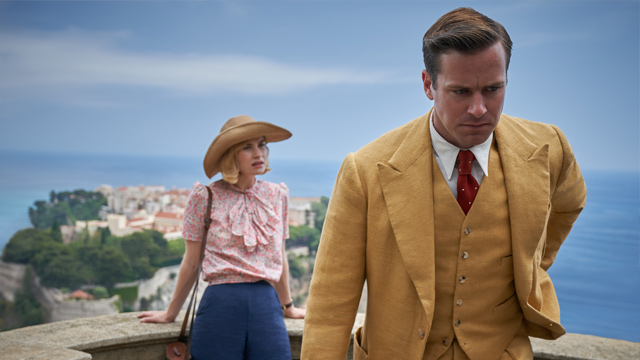 A Thrilling Mystery, a Heart-Wrenching Movie About Exes + More: What We're Watching Now

"I love a good mystery, and the first time I saw the trailer for Rebecca, it made me think of the gothic creepiness of Thornfield Hall in Jane Eyre. The fact that Armie Hammer plays the husband who seems to be hiding something is a bonus—I've been a fan since I saw him in The Man From U.N.C.L.E.—and learning that the movie is based on a book by Daphne du Maurier clinches it! Will be sitting in front of the TV with a big bowl of popcorn for this for sure."—Jo

"If you've seen Netflix's Our Planet or BBC's The Blue Planet, then you've heard the distinct voice of English broadcaster and natural historian David Attenborough. The 93-year-old has been the brain and voice behind many natural history programs since the '50s; and in A Life On Our Planet, he talks about the wonders of the natural world, how humanity is destroying every single part of it, and how we can turn things around—hopefully."—Christa

"When The World of the Married first came out earlier this year, I didn't really feel like I was in the right headspace to watch it considering all the angry tweets and reactions I kept seeing on social media. At that time, there were so many things going on and so many things to get angry about so I resorted to watching my favorite sitcoms like Friends and Modern Family. Seven months into the quarantine, I finally decided to sit down and find out what the fuss about this K-Drama was all about. At first, I thought the K-Drama was simply about married men having affairs with women while the legal wives play martyr for the sake of their kids—but I couldn't have been more wrong. More than, well, adultery, the characters involved all had their own personal issues that added layers and depth to the drama's storyline. I'm nearing the show's finale and so far I feel for no one in the show (not the legal wife, not their kid, and definitely not the asshole of a husband) which is pretty interesting because they were able to pull off a plot with characters that are so unlikable! It wasn't a lie when they said you'll scream and yell and maybe even throw stuff at your screen while watching the episodes!"—Jamie

In case you didn't know, 2018's Dan Villegas-helmed rom-com Exes Baggage just landed on Netflix. As far as Pinoy rom-coms go, I tend to enjoy the more cynical takes on the genre and Exes Baggage is a good candidate for that. Real life exes Angelica Panganiban and Carlo Aquino take their storied history onscreen as Pia and Nix, former lovers who run into each other at a party. Amidst polite hellos, they trade nostalgic flashbacks and confront lingering regrets. Their natural chemistry evokes both humor and poignance into the ebbs and flows of a relationship as they reflect on their lives together long after parting ways.  —Ashley

Where to watch: Ring Light via Empire.ph, KTX

"Yup, it's still happening! The 2020 pageant to select our contender for the global contest is coming to a close on October 25. The finale starts at 10:30 a.m. at the Baguio Country Club. It won't be broadcast on the usual channels though so if you want to cheer along with me you will have to subscribe to Ring Light on the Empire.ph platform. Just note that there's a charge of P299! Not so bad considering there won't be commercials. Can't wait to watch these queens slay onstage—while I will most likely be looking like a slob on the couch." —Mia

"Sometimes I just want to relax to a light-hearted (but still meaningful!) series, and Tsuredure Children (sometimes romanized as Tsurezure or Tsuredzure Children) fits the bill. It’s based on a four-panel web manga by Toshiya Wakabayashi and follows a couple of high school students and their adventures in young love. Each roughly 10-minute episode focuses on two students and their relationship with each other, and it's the kind of series that balances comedic moments (in true anime fashion) with more serious and emotional ones, too. I’ve seen a couple of clips around YouTube and enjoyed them, so I think it’s about time I sat down to watch the whole thing from start to finish."—Trish

"I grew up being fascinated by Nokia phones, and one of the things that have remained rent-free in my head is the fact that the Nokia 7650—yes, as in that 2002 slider phone which was the first to have a VGA camera—is featured in this movie. I finally got to watch the film a couple of days ago and I must say, the Tom Cruise sci-fi starrer is ahead of its time. One scene will remind you of how we are bombarded by ads while surfing the Internet. I also like the 'free will' versus 'determinism' themes, which might make you mull over the film long after the credits have rolled. "—MM