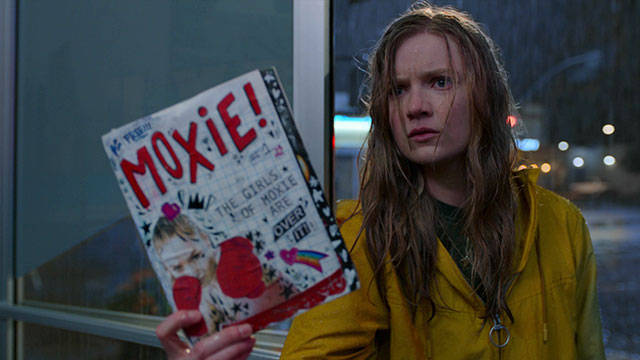 It's not your usual teen rom-com, that's for sure.

(SPOT.ph) Ask anyone what the best teen movie is and an argument is likely to ensue—we’ve all got our own picks, especially from the treasure trove that is the ’90s. Clueless or 10 Things I Hate About You would be right up there, probably alongside Cruel Intentions and Never Been Kissed. While there were gems like The Perks of Being a Wallflower in the years that followed, we didn’t really get that much more in the way of coming-of-age films until Netflix brought back the genre with titles like Sierra Burgess Is a Loser and To All the Boys.

Have you ever noticed, though, that nearly every teen movie revolves around one character’s love life? Don’t get us wrong, we love a good teen rom-com as much as the next guy, but anyone who’s been through an awkward teen phase would know that there’s more to being a teenager than obsessing over your relationship status (or lack thereof). Enter Moxie, an adaptation of a young-adult novel of the same name by Jennifer Mathieu, now streaming on Netflix.

Moxie follows the story of Vivian Carter, whose high school is ruled by jocks that rank girls based on who’s “most bangable” or who has the best ass. She and her best friend Claudia have always kept a low profile, preferring to avoid attention altogether, but when things get to the boiling point, she takes a cue from her former-punk rocker mom and starts an underground zine meant to call out the boys’ sexist behavior.

Moxie is Saturday Night Live alum Amy Poehler’s second stint as director; her first was the 2019 film Wine Country, featuring an all-star cast of female comedians, so we had to ask what part of directing she enjoys the most. "Oh, I love so many parts of it," she answered. "Because it's a series of short stories. And every time one starts, you think, 'Oh, this is gonna be tough.' And then you're in the middle of it, you're like, I don't want it to end and then it ends and something else starts. Prep is its own, like, journey to try to carve away at the bottom of the mountain to try to figure out how we're going to make this. And set is like a rodeo, and you really try to hang on. And then post is where you're the surgeon, and you get to go in and really sit in a dark room and try to figure out what you've made."

Poehler also plays Vivian’s mom, Lisa—no trace of Mean Girls’ Mrs. George here, though. “When I was 16, all I cared about was smashing the patriarchy,” she tells Vivian in the trailer. Poehler’s high-school experience, she shared during a virtual roundtable interview with SPOT.ph, was pretty much like Vivian’s. “I think I would probably say my high school experience was very similar to the film. I went to a really big high school, we had 1,200 students. And it felt a lot like the high school you see in the film, lots of rankings, lots of lists, a really strong athletic department, everybody worshipped the football players.”

While the American high-school experience might be a bit different, you’d have no trouble relating to the super-tight friendship between Vivian and Claudia, played by Hadley Robinson and Lauren Tsai. They found a lot in common with their characters too, said Tsai, whose credits include Terrace House: Aloha State and Legion: “Hadley and I actually are quite introverted people. I think that the friendship [between] Vivian and Claudia was very, like, the younger version of what our friendship is now too, because we love to just hang out and talk about books and poetry, and stories and things you want to make. And I love that because I love when you have like a little world with someone. And I think that's what their friendship was. And I think that's kind of what we have too.”

“Yeah, I feel like the stuff that we do, Vivian and Claudia would have done,” said Robinson, who you may remember as Sallie Gardiner from Greta Gerwig’s 2019 adaptation of Little Women. “You know, like watching K-Drama; they definitely would have done something like that. And so I think we have like the same quirky tastes that they have for sure.”

The movie doesn’t completely do away with a love life for Vivian—Booksmart’s Nico Haraga plays the adorably awkward but self-assured Seth, who takes Vivian on what’s probably the strangest, most unusual first date ever (coffins are involved). But at its core, Moxie is very much about finding the courage to speak up when you know something’s not right and doing it at your own pace. It’s the kind of teen movie that shows girls aren't all about catching the cute boy's eye, and that women have the power to demand change and accountability. And if this is the kind of teen movie we're going to get more of from now on, we'd gladly make room on our list of all-time favorites.

Moxie is now streaming on Netflix.

Staying In Netflix Streaming Services Amy Poehler Me Too Adventurous Savvy Seasoned Greener
Your Guide to Thriving in This Strange New World
Staying
In? What to watch, what to eat, and where to shop from home
OR
Heading
Out? What you need to know to stay safe when heading out