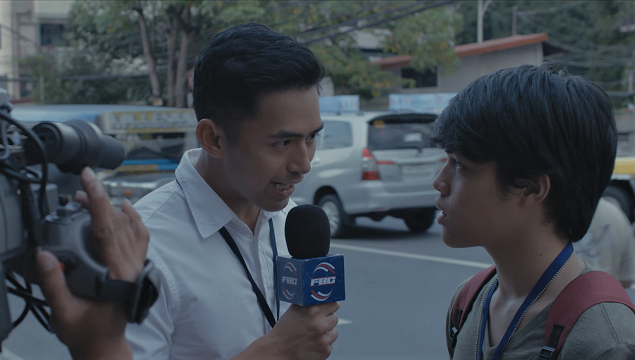 Get ready for He Who Is Without Sin.

(SPOT.ph) Cinemalaya 2021 is forging on digitally! The independent film festival is back for its 17th year from August 6 to September 5. If you can have a little pick me up during ECQ Season We-Can't-Keep-Track-Anymore, look no further than this year's selection of awesome indie picks. There will be 13 short films up for awards as well as four full-length features premiering during the festival. Our pick for the absolute must-watch movie? The intriguing Elijah Canlas-starrer, He Who Is Without Sin, which streams from August 15 to 17. Allow us to convince you.

We can't handle how progressively less and less comfortable Canlas' character looked in this trailer. And yup, that is Enzo Pineda as the super sketchy journalist! It's important to note that this movie is very much not for kids.

This movie follows broadcasting student Martin (Canlas) who meets his idol Lorenzo (Pineda), a popular reporter and supposed shining figure of virtue, in a chance encounter—a connection that goes south pretty quick. The tale is presented in three different ways as Martin tells his friends about his encounter with the reporter: "what happened, what really happened, and what could have happened."

This movie was directed by Jason Paul Laxamana, who was also behind the movies 100 Na Tula Para Kay Stella and Between Maybes.

Before Canlas burst into the mainstream on boys' love series Gameboys, he was already making waves in the indie scene. We know you remember the hard-hitting Kalel, 15. And this isn't even his first Cinemalaya film; he was first spotted in the 2014 entry Sundalong Kanin.

You can stream this movie and more Cinemalaya 2021 picks through KTX.ph. Tickets for He Who Is Without Sin is at P250, which will give you 48 hours to watch it! Don't forget to mark your calendars.

Adventurer Savvy Seasoned Indie Elijah Canlas Cinemalaya Ktx.ph Streaming Services Staying In
Your Guide to Thriving in This Strange New World
Staying
In? What to watch, what to eat, and where to shop from home
OR
Heading
Out? What you need to know to stay safe when heading out